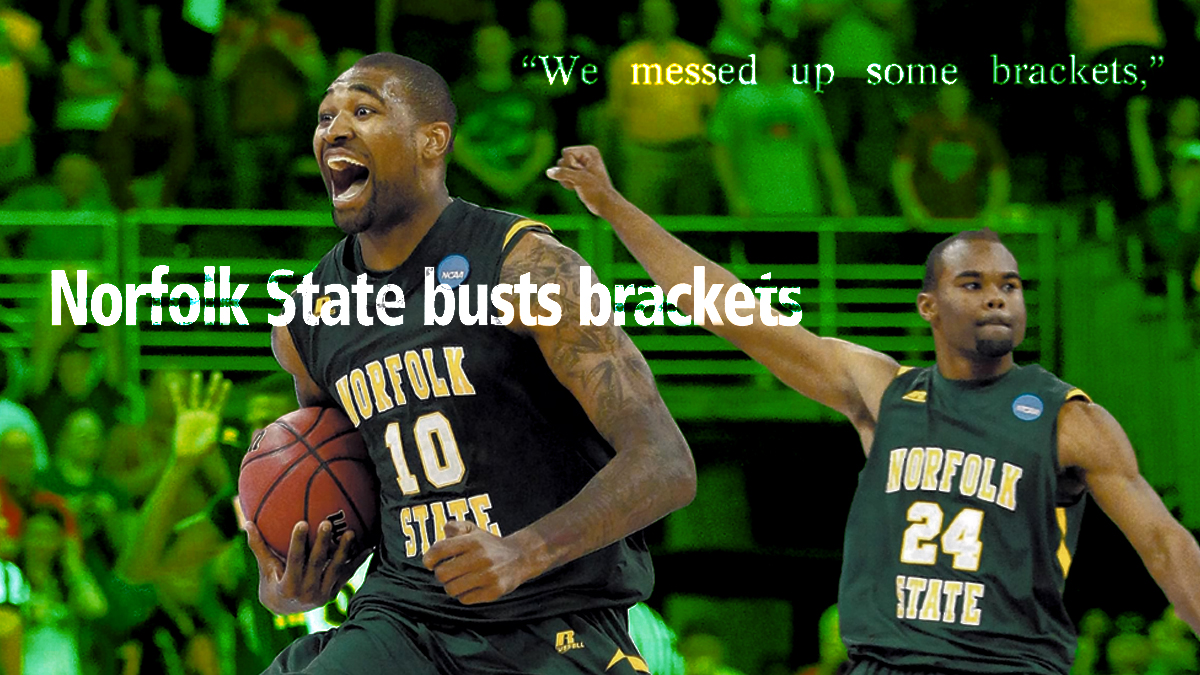 We Messed Up Some Brackets: Norfolk State’s 2012 March Madness Magic

For one day in 2012, Norfolk State and Kyle O’Quinn had Cinderella rocking Green and Gold to the March Madness dance.

There is no March Madness (at least on the basketball court this year) which means there are no opportunities for an HBCU squad to pull off the magic that Norfolk State did on March 16, 2012.

Norfolk State started the 2011-12 season with high hopes. The program had a proud basketball history dating back to its days in the CIAA, but that history had yet to translate into success at the Division I level a decade-and-a-half later.

The Spartans were led by fifth-year head coach Anthony Evans, a New Yorker who surrounded himself with talent from his home state on the court and the sidelines. Current NSU head coach Robert Jones was an assistant on the team. The team also had five transfers from other Division I teams.

The MEAC Tournament was held at Winston-Salem’s Lawrence Joel Veteran’s Memorial Coliseum. Savannah State, a newcomer to the conference, was the top overall seed. But it got knocked out in the quarterfinals as Hampton pulled off the upset. NSU, meanwhile, made quick work of Howard and FAMU to reach the title game against fourth-seeded Bethune-Cookman.

BCU gave NSU everything it could handle and was one possession away from potential stopping history. O’Quinn slipped with the ball to give BCU, down by three, the ball back with 16.9 seconds. NSU held on defense, however, to claim NSU’s first-ever MEAC Tournament title and DI NCAA Tournament appearance.

NSU’s 25-9 record and MEAC Tournament title helped it land a no. 2 seed as it would face a red-hot Missouri team. It was a long shot, but the two-seed had been a charm for MEAC teams a few times. Coppin State broke through with the MEAC’s first NCAA Tournament win in 1997 as it knocked off South Carolina. Five years later, NSU’s arch-rival Hampton University knocked off Iowa State as a no. 15 seed.

But when the Spartans arrived in Omaha, Nebraska to play in the Round of 64, no one expected them to add their name to that list.

NSU jumped out to 15-7 lead before Missouri hit a couple of three-pointers to gain the advantage. It wouldn’t have been the first time an underdog came out strong only to succumb to the supposedly stronger team.

But that was not to be the order of the day. O’Quinn, who rarely took 3-pointers, put one in from the top of the key, and NSU went into halftime tied at 38 against the heavily favored Missouri squad.

NSU continued to press on in the second half, shooting a scorching 62.5 percent from the field, 10-for-19 from the 3-point line. The game was tied at 81 when O’Quinn’s tip-in off a miss and free throw gave it an 84-81 lead with just under 35 seconds remaining.

A couple more free throws gave NSU the 86-84 lead, but the game would not be sealed until Phil Pressley’s 3-point attempt at the buzzer missed.

“We Messed Up Some Brackets”

Next came O’Quinn’s now-iconic streak across the floor, forever embedded into the mystique of March Madness. NSU ruined pretty much everybody’s brackets, and the players knew it.

The Last of Its Kind?

Until that day, outside of HBCU and Division II basketball circles, Norfolk State was unknown to most basketball fans. Since that day eight years ago, only one HBCU has received anything higher than a no. 16 seed. North Carolina Central was a no. 14 seed in 2014, but it was unable to knock off a solid Iowa State team that season.

Texas Southern, Hampton, and North Carolina A&T have all won NCAA Tournament games since then, but all of those wins have come in “The First Four,” formerly known as “play-in games.” Texas Southern’s win in 2018, its first-ever, came against NCCU in a matchup of the only two HBCUs in the tournament.

While the MEAC and other HBCUs have won tournament games since then, none of them have surpassed the upset special NSU pulled off that day. It remains one of the symbolic moments for HBCUs in The Big Dance, and it might just stay the latest one for a while.

We Messed Up Some Brackets: Norfolk State’s 2012 March Madness Magic