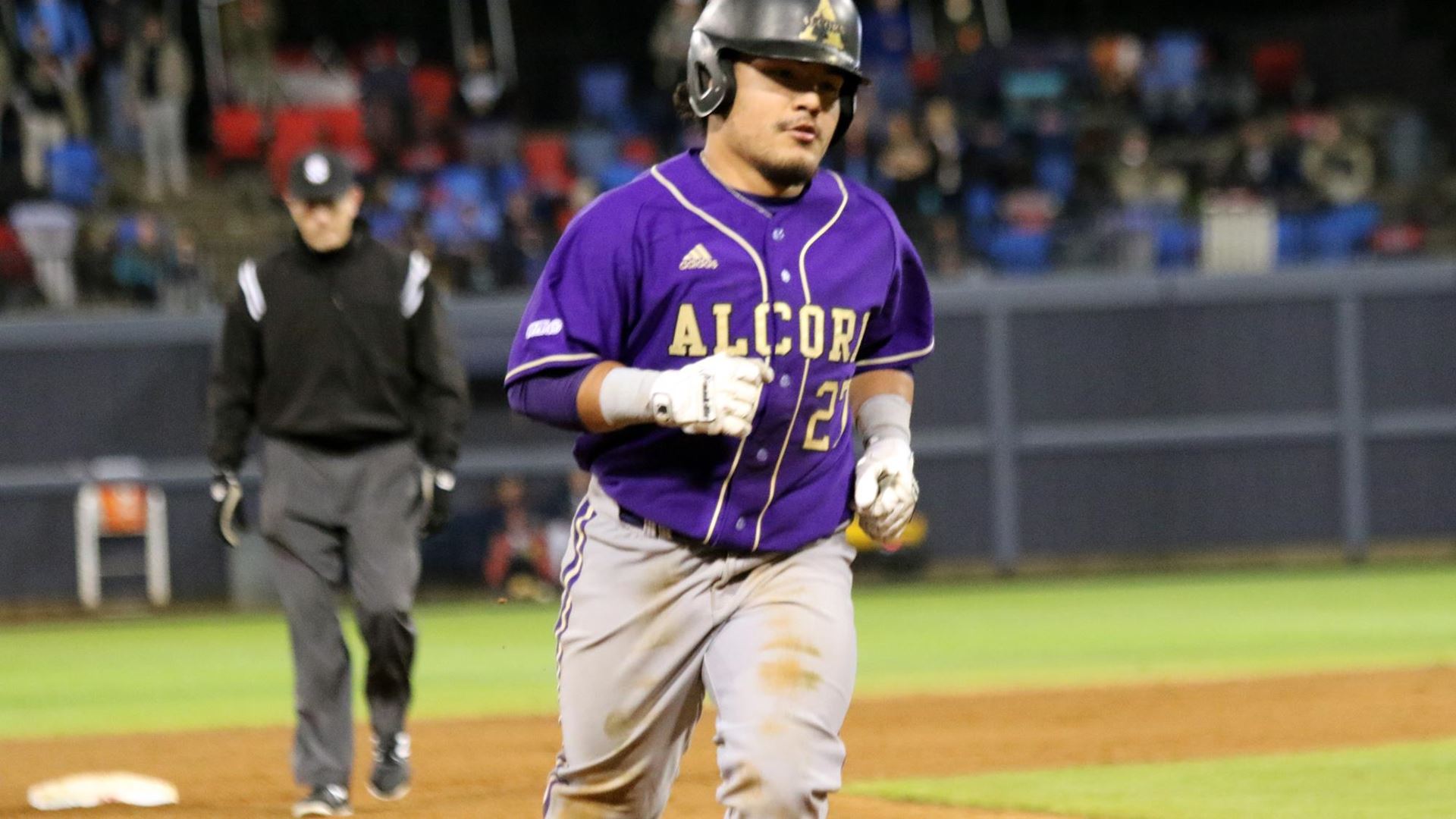 OXFORD, Miss. –  The Alcorn baseball program got a career day from sophomore Tristin Garcia and another home run by senior Travaris Cole but ultimately fell short in a heartbreaking tenth inning defeat to the #15 Ole Miss Rebels on Wednesday night.

The Braves (2-2) nearly doubled up the Rebels in the hit column (14-8) but its four errors were its undoing as the one unearned run that scored proved to be the difference.

Garcia was the star of the show for the Baseball Braves, accumulating a career-high four hits and seven total bases, clubbing his third career home run, driving in two RBI and scoring two runs.

Cole was the other Brave batter to yard, tying the game in the seventh with his third home run in four games while coming around to score twice and plating two as well.

Junior Jamey Fabre continues to be a run producer, logging two more RBI on his only base knock of the afternoon. The utility man from Patterson, Louisiana has four hits on the campaign and each one has driven in at least one runner.

Senior Brandon Rembert had a stellar showing at the dish, going 3-for-5 with an RBI and run scored.

Redshirt senior Hunter Wilson rounds out the purple and gold’s multi-hit performers, notching two singles with a walk and an RBI thrown in.

Sophomore leadoff hitter Tyler Daniels did not log a hit but still made his presence felt at the top of the lineup, walking three times and scoring on two of his free passes.

Ole Miss (3-1) had only three extra-base hits, all home runs, while running wild on the bases to the tune of seven steals on seven attempts.

Knox Loposer, Tyler Keenan and Anthony Servideo were the trio of Rebels to contribute homers while Servideo picked up two of the team’s seven stolen bases.

Jerrion Ealy was the designated speedster for the navy and red, earning two walks and swiping three bags.

Alcorn started off the contest showing a disciplined approach at the plate as Daniels drew a seven-pitch walk followed by a five-pitch at-bat where Garcia laced a liner into right field to put runners on the corners with no outs. Rembert continued the purple and gold’s patient strategy, fouling off three pitches before driving a frozen rope into left for the first run of the ballgame. Cole would load the bases with a line drive of his own, setting up Wilson to force an RBI walk to chase Rebels starter Greer Holston from the game before he could get a single out over 30 pitches. Back-to-back strikeouts threatened to end the Braves’ rally but Fabre delivered in the clutch, stroking a two-out single to left field to drive Rembert and Cole to swell the lead to 4-0 by the end of the top half of the first.

Senior Joe Smith, in his first career start after 27 relief appearances, did his part in the bottom of the opening frame, allowing two walks but zero runs while blowing away to Rebels on fastballs to keep the positive vibes going as the Baseball Braves retained their 4-0 lead into the second.

Garcia was able to reach base safely and force a balk on an early steal attempt to get to second and made third on a wild pitch but that’s where he would be stranded. A solo home run and an RBI single put the Rebels on the scoreboard to make it 4-2 Alcorn after two.

Wilson opened the third by shooting a single through the left side before getting erased on a double play. A moonshot blast from Preseason All-SEC Second Teamer Tyler Keenan and a sacrifice fly by Justin Bench tied the game heading into the fourth.

Redshirt senior Jordan McGowan ripped a comebacker to open the fourth, advanced to second on a sacrifice bunt then proceeded to come around to score on a screamer to left-center by Garcia, putting Alcorn back in front, 5-4. Ole Miss came roaring back in the bottom half to tie the game but it could have been much worse. Meadows, making his collegiate debut, had two runners in scoring position but struck out the final two batters to get out of trouble and keep the game even at five.

The fifth inning was uneventful for both the Braves and the Rebels as each team was set down in order.

The sixth netted the same result for the boys from Lorman but the home squad saw more fortunate results, capitalizing on an Alcorn miscue and a sacrifice fly to take its first lead of the night, 7-5.

The Baseball Braves got back to swinging the lumber with authority in the seventh as Garcia piled onto his monster hitting performance with a laser beam round-tripper to leadoff the frame and cut the deficit to 7-6. Two batters later, Cole unloaded on a hanging curveball and bent it around the left field foul pole to knot things once again at seven a piece.

U of M saw its first two hitters reach via walks in the seventh before redshirt senior starting pitcher Jose Fernandez, making only his second career appearance out of the bullpen, escaping danger by getting a strikeout and a weak groundout to first to eliminate the threat.

A three-up, three-down top of the eighth for the Braves set the stage for Ole Miss to snag the upper-hand courtesy of a pinch-hit RBI single by Tim Elko to send the Rebels into the ninth ahead 8-7.

Down to its final three outs, the boys from Lorman showed their grit. Daniels opened the frame with a five-pitch walk, a Rembert single to advance him to third and a miraculous RBI infield dribbler by Cole that died right on first base chalk to give the Braves life.

Fernandez maintained his top form, breezing through the bottom half of the Rebel lineup to send this game into extras.

Daniels drew a two-out walk in the Braves portion of the tenth but that was all it could muster. Ole Miss wasted no time sending the Oxford crowd home happy as Anthony Servideo sent the third-pitch he saw sailing into the mostly empty student section past the right field wall as Ole Miss fought off a scrappy Alcorn ballclub, 9-8.

Coach Richardson’s team has a week off before traveling to another SEC Powerhouse in #10 Mississippi State on Wednesday, February 26 with first pitch set for 4:00 p.m.

– This was the first ever meeting between Alcorn and Ole Miss in baseball and the 55th SEC opponent the Braves have faced all-time. The purple and gold are still searching that elusive first win against the powerhouse conference.

Overall Statement:
“We fought hard tonight, we just made too many errors. Anytime you’re playing a good ballclub like that, they capitalize on your mistakes. We’ll learn from this and get better but I was extremely proud of the way we competed.”