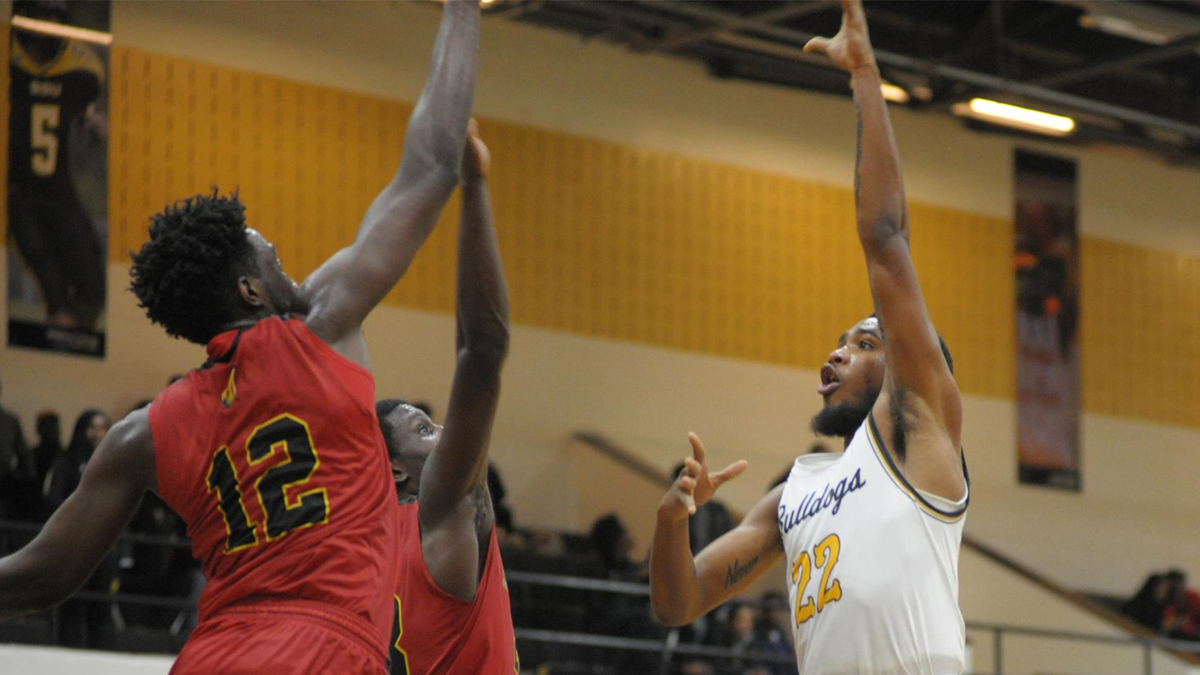 Bulldogs slow down the team with the best record in the league.

BOWIE, Md. – In their 52nd overall meeting, the Bulldogs of Bowie State picked up a conference victory on Saturday by defeating the Fayetteville State Broncos by a score of 71-64. The win sets Bowie State’s record at 8-6 and 1-2 in conference play.

“They came in with the best record in the league and we told our guys this was a great opportunity to pick up a big win”, said Bowie State Head Coach Darrell Brooks. “We didn’t establish ourselves defensively in the first 5-7 minutes but the big run late in the first half certainly established us defensively.”

The Broncos mostly held the lead in the first half, until the Bulldogs went on a 16-0 run at 7:22 mark that started with Juwan Smith knocking down a jump shot. After that, the series consisted of Cameron Haynes’ jump shot at the 6:16 mark. Rinardo Perry knocked down a three-pointer at the 5:30 mark.

Yohance Fleming nailed a jump shot at the 3:37 mark and Kani Coles converted on two free throws and another three-pointer by Fleming at the 1:41 mark. The run continued and Bowie State entered intermission with a 35-25 lead.

The Bulldogs knocked down 40 percent of it first half shots (12-of-30), which included 5-of-8 (63 percent) behind the 3-point line and made all six of its free throws over the first 20 minutes.

In the second half, Bowie State held a 17-point lead twice, but Fayetteville State began chopping away at the Bulldogs’ lead little by little. By the 11-minute mark, the Bulldogs’ lead was cut to 10 and trimmed the deficit down to five by the 5-minute mark. However, the Bulldogs were able to hold the Broncos off down the stretch to earn a CIAA victory.

Cameron Haynes led three Bulldogs in double-figure scoring with 15 points on 5-of-8 shooting from the field while David Belle and Yohance Fleming added 13 and 11 points respectively Rinardo Perry chipped in nine and Saiquan Jamison accumulated eight points for the Bulldogs’.

For Fayetteville State (11-2 / 4-2 CIAA), Jalen Seegars led a trio of Broncos in double figured with 18 points, while Darian Dixon scored 15 points and Will Brown chipped in 10 points. Seegers and Brown were Fayetteville State’s leading rebounders with a half dozen each.

Bowie State shot 38 percent from the field (21-of-56), 41 percent from behind the arc (7-of-17) and knocked down 85 percent of its free throws (22-of-26). The Bulldogs defense forced Fayetteville State into 14 turnovers while Bowie State turned the ball over a season-low six times.

Bowie State will be idle through the holiday break and will return to action on Saturday (January 4) hosting Winston-Salem State at 4 p.m. in the A.C. Jordan Arena.