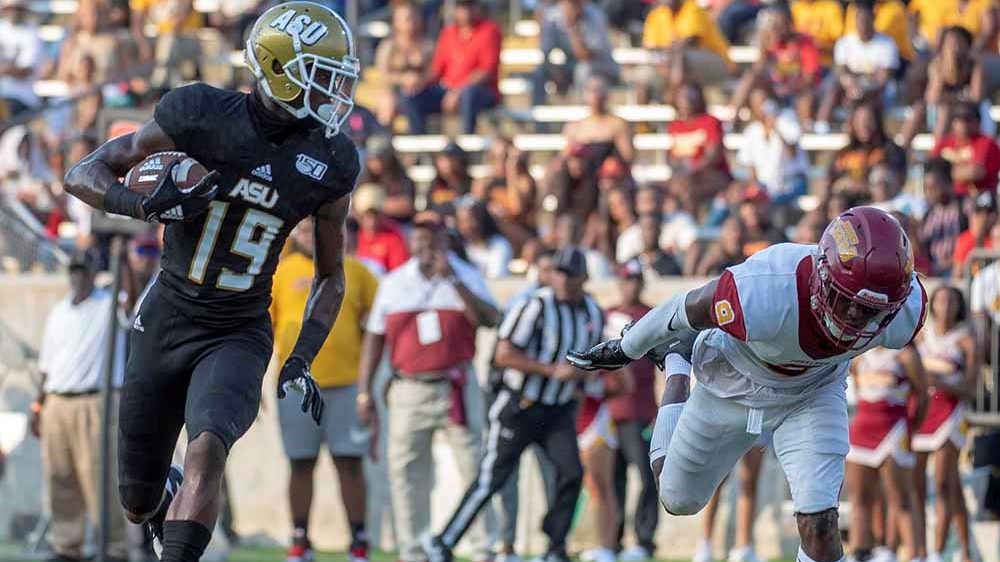 Alabama State claimed back-to-back wins over Tuskegee for the first time in nearly 25 years on Saturday.

Alabama State claimed its second consecutive victory over their rival Tuskegee Saturday night in the 2019 Labor Day Classic, 38-31 in front of 27,838 at ASU Stadium.

KHA’Darris Davis threw for a career-high 347 yards on 20-for-30-1 passing, tying his career mark for touchdowns with four (set last year at the Turkey Day Classic against Mississippi Valley State). He threw three of those strikes to Michael Jefferson – a career-high for the sophomore receiver – has he hauled in five receptions a career-high 174 yards.

The two hooked up for the deciding touchdown with 14:07 remaining in the game, an 82-yard strike (the longest throw and catch between the two). The duo hooked up on a third down late in the fourth quarter that sealed the win on the Hornets’ final drive with under two minutes play.

Jeremiah Hixon also set a career-high with eight receptions for 116 yards and a touchdown. Keenan Isaac led the Alabama State defense with nine tackles on the night.

Alabama State rolled up 428 yards of total offense, including 81 on the ground with 50 of those coming on a Duran Bell touchdown run to tie the game up (with a two-point conversion) with 6:24 to play in the third quarter.

Tuskegee struck first with 10:57 to play in the opening quarter on a 24-yard pass from Jamarcus Ezell, before Alabama State tied the game on the final play of that quarter with a 13-play, 82-yard drive that consumed 6:09 on the clock – tying the game at 7-all.

The two combined for 27 points in the second quarter with Tuskegee grabbing a 21-20 lead heading to the locker room. After a Tuskegee field goal, Hunter Hanson connected on a 43-yard field goal with 8:01 to play in the third to trim the lead to 24-23, before the Golden Tigers answered with a kickoff return to push the lead eight.

That set the stage for the final two drives for the Hornets.

Alabama State (1-1) claimed back-to-back wins in the series for the first time since 1994-95 when they were nearing the end of nine-game winning streak in the series.

Alabama State returns to action face nationally ranked Kennesaw State at ASU Stadium, with kick set for 5 pm Saturday. The game will be carried by the Hornet Sports Network.