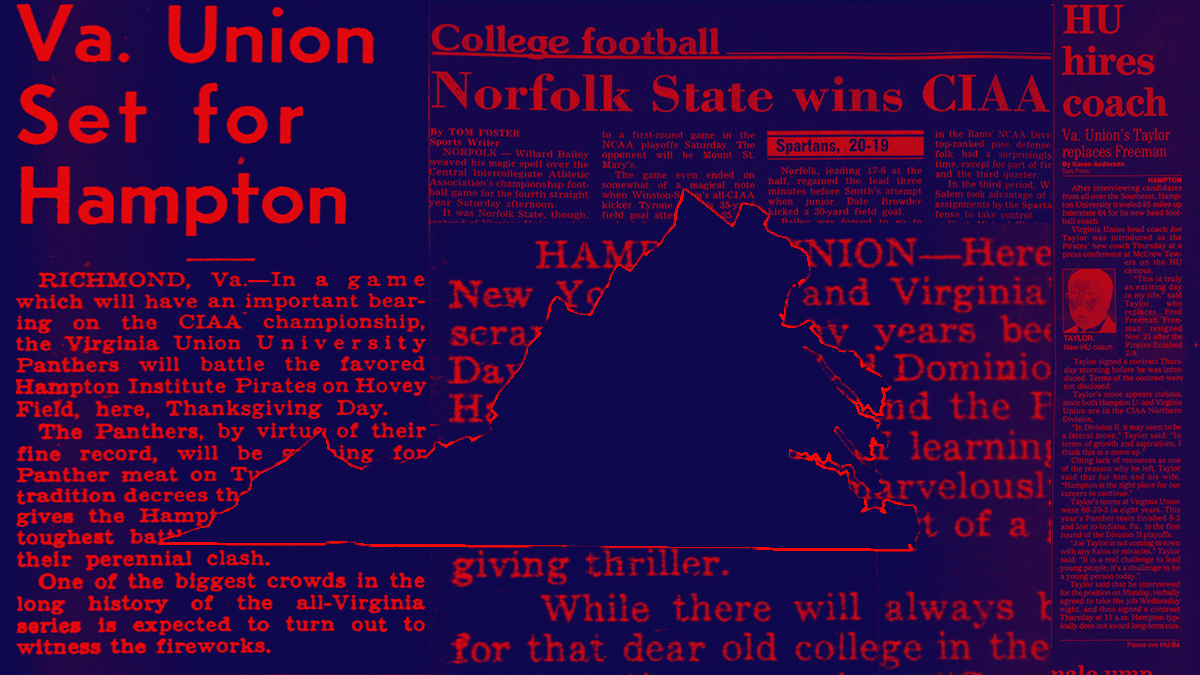 Once the heart of the CIAA, Virginia will feel like old times when Virginia Union travels to Hampton and Virginia State goes to NSU.

Once upon a time, and not long ago, Virginia ruled the CIAA.

The Commonwealth of Virginia dominated the CIAA in its early days and then again from the 1970s until the 1990s when two of its four football schools decided to head to Division I-AA football, ending one rivalry and handicapping another one.

Saturday in the Tidewater area of Virginia there will be two games involving those four programs– Hampton, Virginia Union, Virginia State and Norfolk State– for the first time in a quarter century.

Hampton left the CIAA in 1995, the conference that it helped start in 1912, for greener pastures in Division I-AA. It left behind a rich rivalry with VUU that extended back nearly 100 years between the two private HBCUs located just about an hour apart on Interstate 64. Saturday will be the first meeting between the two teams since then.

The VSU/NSU rivalry is could either be described as sibling-like or even father/son as NSU was actually Norfolk Branch of Virginia State College for Negroes at one point. Because of that, despite their different NCAA distinctions, VSU is known as “Big State” while NSU is “Little State.”

To understand why these two FCS/D2 games matter, you have to go back over a century.

The roots of the CIAA began on the campus of Hampton Institute in 1912. Other private institutions like Shaw, Howard, Lincoln and Virginia Union decided to organize out of necessity as black colleges were not a part of the NCAA. Hampton and Virginia Union had been playing each other in football years before, and other than a Howard win in the inaugural season, the two schools dominated the league’s first decade. In fact, from 1912 through 1930, HI and VU won 11 total championships, eight being claimed by Hampton.

State schools began to catch up with their private counterparts as time went on. North Carolina A&T became the first public school to claim the CIAA title in 1927. Two years later, Virginia State College for Negroes won its first-ever CIAA title. Hampton would win one more title in 1931 before the CIAA became a two-team contest between Virginia State and Morgan State for the next two decades. Harry Jefferson would lead his team to five titles from 1929 through 1945 as Hampton and Virginia Union fell back to the pack.

The next two decades wouldn’t be so kind to VSU, nor Hampton or Virginia Union for that matter. The 1952 VSU victory would be the only one claimed by the commonwealth in the 50s and 60s, even after NSU was added to the league in the 1960s.

The 70s would belong to Virginia, however. VSU won titles in 1970 and 1972 but the title soon relocated to the East as Dick Price’s Norfolk State team won three straight titles from 1974 through 1976, establishing the CIAA’s youngest member as a power. Meanwhile Virginia Union had retooled under coach Willard Bailey. After winning the CIAA in 1973, Bailey’s Union squads won five of the next six titles from 1979 through 1983.

Bailey shocked the HBCU football world when he left the powerhouse he’d taken over at Virginia Union to move to Norfolk State. He picked up right where he left off at NSU, winning the 1984 and continuing to assert his dominance. The next year, Hampton arose from a 50-year slumber to capture the 1985 title, and it would win the division in 1987 before falling back to earth. Coincidently, Bailey’s departure opened the door for a young Joe Taylor to take over in Richmond, where he led the Panthers to the 1986 crown.

Virginia continued to field good CIAA teams over the next five years, but Winston-Salem State, first under Bill Hayes and later Pete Richardson, kept the title in North Carolina from 1987 through 1991 (the 1989 Bowie State title was vacated).

Taylor continued to sharpen his coaching skills at VUU where he consistently had good teams that just fell short of winning the league. Following the 1991 season he made his move to Hampton, which had fallen back to the bottom of the CIAA but didn’t plan to stay there. With Taylor’s coaching skills and Dr. William Harvey’s fundraising prowless, Hampton dominated the CIAA from 1992 through 1994, winning the league every year while never losing to a CIAA opponent again as it eventually moved to Division I-AA in 1995 and joined the MEAC.

Norfolk State wasn’t nearly the bully in football that Hampton was, but by the 1990s its high-wire act featuring quarterback Aaron Sparrow and reciever James Roe were lighting up scoreboards as it prepared to follow Hampton toward’s Division I. Both Dr. Harvey and NSU’s Dr. William B. Harrison had hoped that their squads could maintain CIAA affiliation while playing Division 1-A ball, but that wasn’t meant to be. Unlike Hampton, however, NSU kept its series with VSU open after moving up in the form of the Labor Day Classsic.

Latrell Scott knows how big this weekend is. On Saturday he’ll lead his Norfolk State Spartans on to Dick Price Stadium to go up against the Trojans of Virginia State, the team he led to a CIAA championship in 2014.

“VSU will be a tough opponent and we expect their best shot,” Scott said. “They are a talented team and surely they will be up for the challenge.”

Scott isn’t just blowing smoke. He knows how badly VSU would love to get one up on “Little State,” its FCS neighbor and a team that often recruits the same players. Two years ago VSU came into NSU after a brief series hiatus and came out with a win. NSU won convincingly in 2018, but in a rivalry game anything can happen.

“We expect the stadium to be packed with fans from both schools,” Scott said. “It is a long-standing rivalry that unites the community. It is a great game for HBCU football.”

Although his focus is on his game, as a Richmond native and Hampton alumnus, he knows the action in the Penninsula matters as well.

“It’s great to see Hampton and Union play. I believe that the last time that they played, I actually played in the game at Hovey Field,” Scott said. “I grew up a VUU fan and played at Hampton, so I remember when this was a big-time rivalry. Again, this is a great game for HBCU football.”

While Scott and Co. will be looking to prevent an upset, Dr. Alvin Parker and Virginia Union are hoping to cook up one. Hampton scored a 65-7 win over another former CIAA foe, Elizabeth City State, last Saturday. They may both play in the CIAA, but all due respect to ECSU, they aren’t the same.

VUU went 8-2 last season and brings back several talented players, including running back Tabyus Taylor and defensive back Sterling Hammond, who could easily be suiting up for the other side. He knows that despite all that, as the D2 team, he and his crew will be the underdog even though Virginia Union owns a 41-38-3 advantage over Hampton.

Yes, Saturday will be a big night for HBCU football. Four football programs with long histories of rivalry and winning will suit up against each other, NCAA Divisions be damned. Like the best HBCU rivalries, there will be married couples and families wearing different color shirts, talking varying levels of trash while dipping their fish in the same hot grease.

“Whoever wins can get a little bit more bragging rights.”

And when it comes down to it, that’s what rivalry is all about.