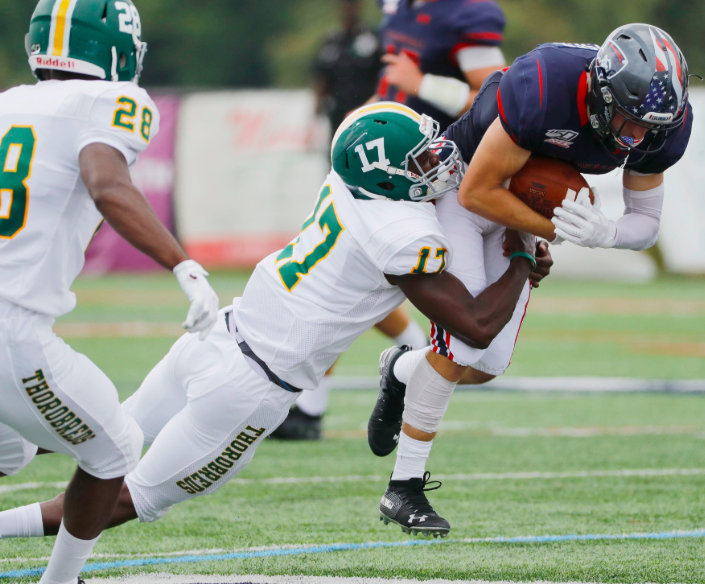 KSU picks up a huge win in its season opener against a D1 opponent on the road.

In their season opener, the Kentucky State Thorobreds faced a tough task in Robert Morris; a Division One FCS opponent.

That task was not an issue as the Thorobreds scored 13 unanswered points to shock the Colonials, 13-7.

It was a rough start as the Colonials drove down the field for a 78-yard touchdown drive in the middle of the first quarter. Jaylen Myers led KSU down the field on a touchdown drive at the end of the second quarter. It wasn’t a normal drive as the Thorobreds went on a 94-yard drive that took over 11 minutes to complete. Deeper in the 3rd quarter, the same thing happened. Israel Fields finished an 80-yard drive with a touchdown on that drive.

It was a close game moving forward but a fumble recovery by Earnest Austin in the middle of the 4th quarter saved the lead and eventually the win for KSU.

The divisional difference did not matter as the Thorobreds possessed the ball for a little under 36 minutes during the contest. They also ran more plays and had more rushing yards. Brett Sylve held his own with 88 rushing yards on 20 attempts. Jaylen Myers gained 70 yards in the air and 65 yards on the ground as well.

In their first win since 2017, the Thorobreds picked up a big one. Tuskegee will be their next opponent on next Saturday.