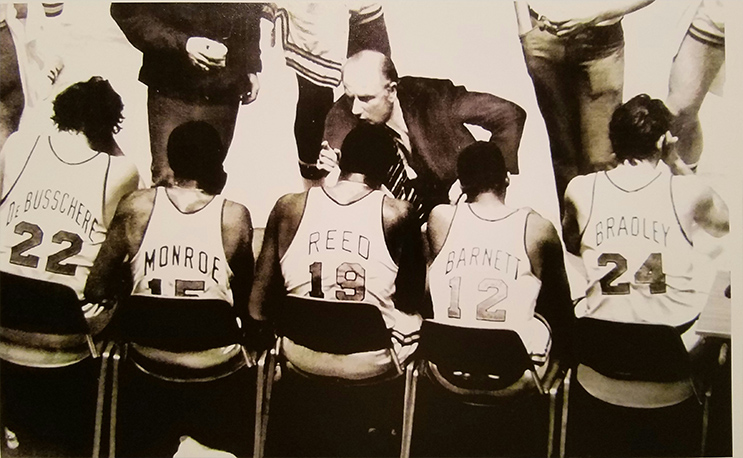 The 1972-73 Knicks defeated the Los Angeles Lakers 4-1 to take home their second NBA title in franchise history with a roster that included three former HBCU stars.

The Knicks didn’t have just ANY three HBCU players, they had three of the greatest players ever to come from black colleges. There was The Captain, Willis Reed, from Grambling State. There was Dick “Skull” Barnett from Tennessee A&I (Tennessee State) and Earl “The Pearl” Monroe from Winston-Salem State.

New York drafted Reed eighth overall in 1964 after a stellar career at Grambling State. Reed was a force of nature for GSU, leading the school to three SWAC titles and an NAIA title during his career. He averaged an amazing 26 points and 21 rebounds per game as a senior.

The big man immediately made an impact with the Knicks, averaging 19.5 points and 14.7 rebounds per game en route to becoming an All-Star and winning NBA Rookie of The Year honors. The 6’9 big man was a force in the 1960s NBA despite being dwarfed by talents like Wilt Chamberlain and Lew Alcindor, but still managed to be a perennial All-Star, averaging better than 20 ppg and 14 rebounds for better than five years. He’s best remembered for returning to the court for Game Seven of the 1970s NBA Finals despite a severe knee injury and giving an emotional lift to eventual NBA champs. By 1973 injuries had cut down on his productivity and effectiveness, but he was still respected on the team and around the league.

Barnett was a star for three consecutive NAIA titles under legendary coach John McLendon in the late 1950s. The Indiana native was selected fourth overall by the Syracuse Nationals and spent time in the ABL and Lakers before landing with the Knicks in the mid 1960s. He averaged a career-high 23.1 points per game during the 1966 season.

Rounding out the trio was Earl Monroe, the pride of North Philly and Winston-Salem State College. Monroe came down to play for Clarence “Big House” Gaines as a raw player and left as an NCAA champion and college basketball legend as he averaged 41.5 points per game and guided the school to the NCAA College Division (Division II) title. Those accolades helped him earn several nicknames, including Jesus, The Doctor and The Pearl, as well as become the second pick in the 1967 NBA Draft. Monroe continued his prolific scoring ways with the Baltimore Bullets, but the team couldn’t get past the Knicks. Eventually the Knicks traded for Monroe, a controversial move at the time as many wondered how Monroe and Clyde Frazier would play together.

Things started off slowly as Monroe averaged just 11.3 ppg while playing just 20 minutes a game his first season in New York. His minutes increased during the 1972-73 season and his scoring hopped to 15.5 ppg in the regular season.

The 1973 playoffs started against Monroe’s old squad as the Knicks faced off against the Baltimore Bullets in the first round. Monroe topped the 20-point mark three times during the series, including a 32-point performance in Game Two as the Knicks won the series 4-1.

The Eastern Conference Finals turned out to be yet another battle between the Knicks and their chief conference rival, the Boston Celtics. After taking a 3-1 lead the Knicks dropped games five and six to find themselves in a Game 7 at home. They would take care of business and earn a chance to face Jerry West and Wilt Chamberlain in the NBA Finals.

Game One in LA at the Forum went the Lakers way. It would be the only one that the Knicks wouldn’t win, however as they took the next four games. Monroe came up with 21 clutch points in Game Three as the Knicks picked up a four-point win at home while Reed looked like his old self with 22 points and 10 rebounds. Game Four was more of the same for The Captain as he put up 21 points and 11 rebounds against Chamberlain. Both Monroe and Reed were solid in the closing game, with The Pearl putting up 23 points and The Captain adding 18 points, 13 rebounds and seven assists as the Knicks brought home their second title in franchise history.

Forty-six years later the Knicks are still looking for their next NBA title. History shows that if they are going to win, or at least compete for a title, they need a few HBCU players on their side.