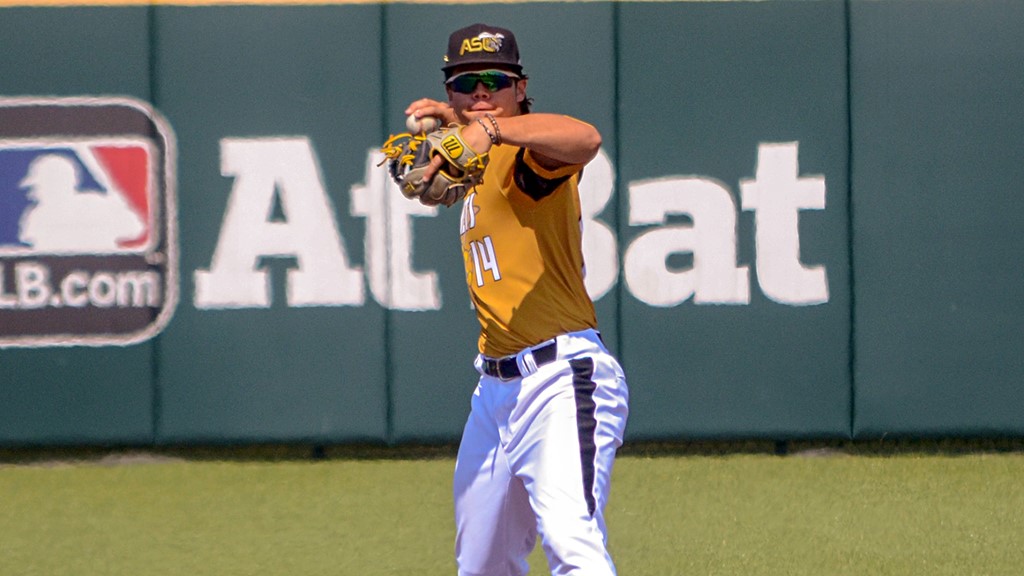 Seasons end and contenders move on in New Orleans.

Though the Panthers weren’t able to get much else going offensively, Alcorn State struggled to figure out Laux early on. The Braves finally broke through in the bottom of the fifth when Brandon Barna broke up Laux’s no-hit bid with a single and later in the frame, Edward Jackson singled home Brendly Martina, who reached on an error.

In the top of the eighth, Prairie View A&M jumped back in front with two outs, as Lingua singled and moved to second on a wild pitch. After Tyler Gordon drew a walk, Alex Martinez delivered a RBI single for a 2-1 Panthers lead. Dalton Horner followed with a two-run base hit.

The run support was more than enough for Laux and the Panthers, who quieted Alcorn State from that point and advanced to the next round.

Jackson State batted around to open the game, taking advantage of a trio of Golden Lions errors on its way to a six-run surge.  Chris Prentiss led off the inning with a single and after Equon Smith reached on an error, Jaylyn Williams singled to load the bases.

Prentiss and Williams scored on a fielding gaffe at third, and following a RBI single by Wesley Reyes, Dezmond Chumley delivered a two-run base hit. Tyler Culpepper followed with a RBI triple before UAPB could get out of the inning.

The Golden Lions scrapped three runs back in the top of the third. Jarficur Parker singled to lead off the inning, but managed to get to second despite being caught stealing as the shortstop muffed the would-be rundown throw. After Davion White was hit by a pitch, Justin Robinson singled home Parker and Ricardo Sanchez hit a two-run single, legging it out to third after a fielding miscue in deep right center.

Jackson State used small ball to reinforce its lead, tacking on six more runs in a rally highlighted by a Williams two-run double. Chumley later hit a solo home run in the bottom of the fourth for insurance, and the Tigers cruised as their advantage was never threatened the rest of the way.

With the Hornets ahead 2-1 entering the sixth, ASU reliever Jeremy Rivera struck Drexler Macaay with a pitch while the bases were loaded, allowing Grambling State to tie the game. Richard Ortiz followed with an RBI single but the Tigers were unable to push more runners across home plate.

In the bottom of the eighth, Grambling State starter Bryan Delgado walked Noel Cheneau, who scored on an RBI double by Angel Jimenez. Though Delgado forced a second out, Ryan Evans came on in relief and issued consecutive walks, after which DeGuzman did the rest. Terrell McCall shut down Grambling State in the top of the ninth for the save, sending the Hornets on to the next round.

Alabama State starter Ricardo Rivera struck Isaiah Torres with an errant pitch to open the game, and Jahmoi Percival’s RBI double put Grambling State on the board in the top of the first. The lead didn’t last long as the Hornets put some offense together in the bottom of the second.

Jimenez drew a walk, and Eriq White reached on a single. Cameron Heard cleared the bases with a double to make it 2-1 in favor of Alabama State. The margin stayed as such until Grambling State’s rally in the sixth inning.

Trailing 9-6 in the bottom of the ninth after a solo shot by TSU’s O.J. Oloruntimilehin, Ashanti Wheatley led off the Jaguars half of the inning with a solo home run of his own. Afterward, Malik Blaise hit a one-out single. Down to their final out, the Jaguars rallied as Hudson singled, and Coby Taylor drove in Blaise with a single. Javeyan Williams tied it with a two-run single to force extra innings.

After Connor Whalen worked a scoreless 10th for Southern, Bobby Johnson singled to put the winning run aboard, and Blaise dropped a blooper to get runners at second and third. Hunter David was given a free pass, setting the table for Hudson to bring it home for the Jaguars.

The defending champions struck first as Tyson Thompson led off the inning with a single down the left field line. Thompson later scored on a Keanu Van Kuren single, but the Tigers stranded a pair of runners to end the inning.

Southern responded in the bottom of the first as Tyler LaPorte slapped a leadoff double to right centerfield. LaPorte scored after Johnny Johnson singled to right, but Johnson was thrown out trying to stretch the play to second. The Jaguars offense stalled to end the frame.

Nic Garza led off the top of the second with a single, moving to second on a groundout before a fielding error allowed Garza to cross home plate to put TSU back in front. Texas Southern continued to find success with its leadoff hitters, as O.J. Oloruntimilehin hit a ground-rule double to start the third. Texas Southern went on to lead by as many as five, carrying an 8-5 lead into the top of the ninth before the game’s frenzied conclusion.

Key Stats
– Five different TSU players had two hits each.
– The sides combined for 32 total hits
– Blaise was 4-for-5 with two doubles and a pair of RBIs­­.