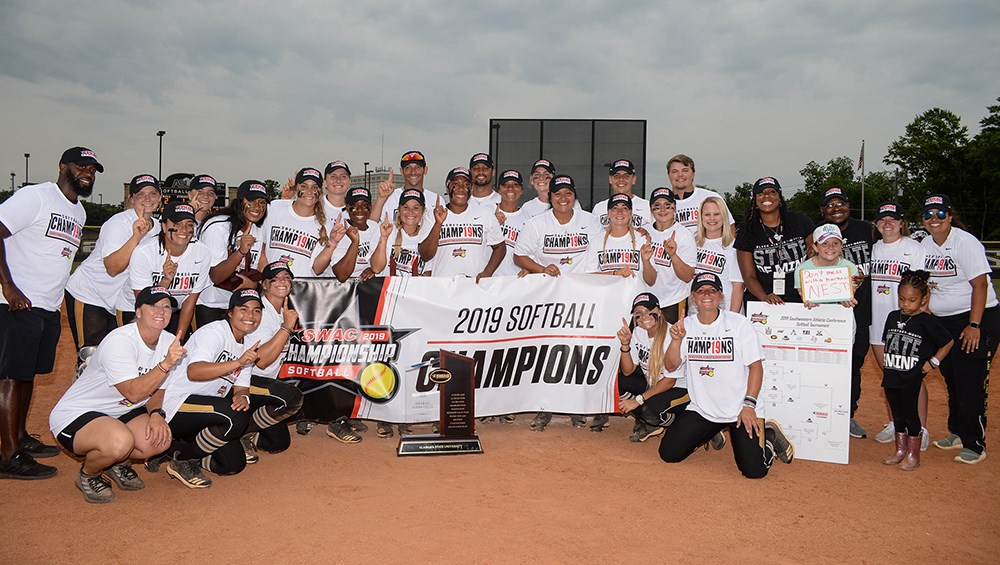 MONTGOMERY, Ala.| The Southwestern Athletic Conference (SWAC) Softball Tournament was forced into a third game for the third consecutive year at the Barbara Williams Softball Complex, and the third time proved to be the charm for Alabama State as they claimed their first conference championship since 2016 with an 8-4 victory over Texas Southern Saturday night.

Alabama State (24-23), playing in their fifth consecutive conference title game and third at home, used a three-run fourth inning to extend their lead over Texas Southern en route to the championship. The Lady Hornets used a Teah Steel single to right that scored Amira James to take a 3-2 lead, before they added another run on a Casey Durham double to extend the lead to 4-2. Their final run of the inning came via a groundout by Kaylee Davis to third that allowed Steel to score from third with two outs in the inning.

After Texas Southern (25-27) battled back to get the game to within 5-3, Alabama State answered with three more runs in the top half of the seventh to put the game away using RBI singles by Charlene Castro and James to extend the lead to 8-3. Texas Southern got one more run in the bottom of the seventh before Tournament Most Valuable Player Justine Jean induced a fly ball to center and Alexis Sydnor squeezed the final out of the game to give the Lady Hornets the title.

Jean (12-12) finished with a complete-game effort, scattering 10 hits and allowing four runs (three earned), and recording a pair of strikeouts. At the plate, Castro led the Lady Hornets as she went 2-for-4 with a pair of runs scored and an RBI.

Joining Jean on the All-Tournament team were James, Sydnor and Kirstin Gunter who made multiple plays at short in both games Saturday.

The Lady Hornets entered the day undefeated before falling in the first game of the day 6-2, despite Kaylee Davis leading the team with multiple hits.

The championship won by the Lady Hornets is the sixth conference title won by Alabama State this spring in all sports, and the 10th won by the department since the beginning of the fall 2018.

Alabama State will find out their opponent Sunday night as the NCAA will hold their Selection Show on ESPN2 at 8 pm. The Lady Hornets will host a Watch Party inside the ASU Stadium Club Lounge Sunday night, with doors opening at 7 pm.