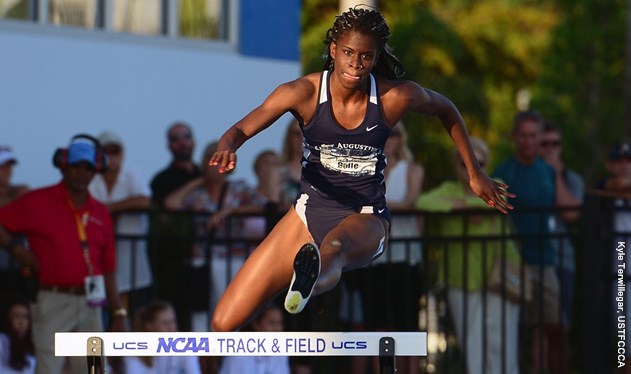 This former Falcon set the hurdles on fire in Florida.

Belle, running for G.W. Express/Nike, posted a blazing time of 54.18 seconds to win the 400 hurdles on Thursday, March 28. She set a new facility record at the Percy Beard Track in the event.

The winning time is a personal best for Belle, a native of St. George, Barbados who competed for the Lady Falcons from 2014 to 2017. Belle graduated from SAU with a criminal justice degree in 2018.

The world time is a continuation of a marvelous career for Belle, who captured three consecutive NCAA Division II national titles in the 400 hurdles as a collegiate hurdler for Saint Augustine’s University.

Belle owns the NCAA Division II national record (55.42 seconds) in the 400 hurdles. In fact, Belle has the top four fastest times and six of the top seven all-time collegiate times in the event.

Najair Jackson (So./Spanish Town, Jamaica) of Saint Augustine’s University defeated a field of mostly Division I competitors in the college division of the men’s javelin throw at the Florida Relays in Gainesville, Fla., on Thursday night, March 28.

Jackson, a Division II All-American, heaved a season-best toss of 220-3 to win by nearly two feet. Chris Mirabelli of Rutgers University was second with a throw of 218-4 and John Ampomah, who threw unattached, was third with a mark of 215-1. Twenty-five throwers competed in the event.

Last season, Jackson placed second in the NCAA DII Outdoor Track & Field Championships with a career throw of 234-9. He currently ranks second nationally in DII in the javelin throw.