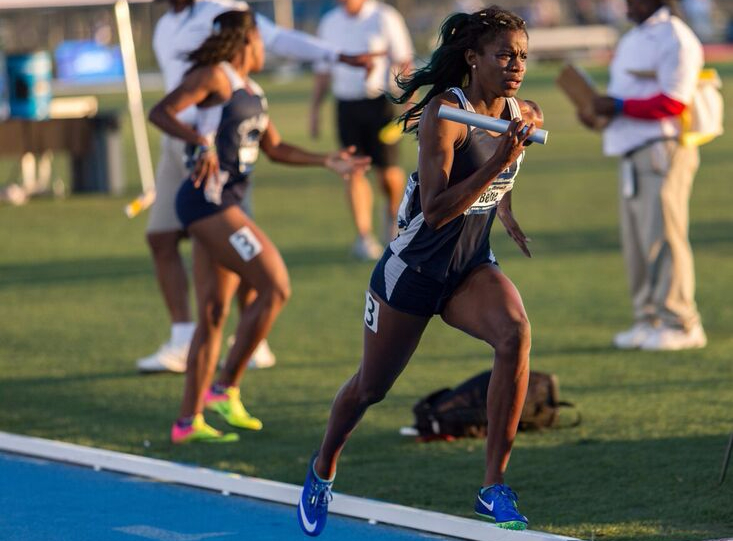 The Rio Olympian completed her collegiate career with four All-America honors on Saturday in leading the Lady Falcons to a ninth-place tie in the women’s division. Belle scored 17.5 of the team’s 24 points as she also placed third in the 100-meter hurdles and helped the Lady Falcons finish fourth in the 4×400-meter relays and eighth in the 4×100-meter relays. The 4×400 squad also included Ade Hunter (Jr./Philadelphia, PA), Leah Barker (Jr./St. Michaels, Barbados) and Iris Robinson (Jr./Birmingham, AL) and the 4×100 unit also consisted of Shakinah Brooks (Sr./Raleigh, NC), Barker and Robinson.

What everyone at the meet will remember is Belle’s performance in the 400 hurdles. Her winning time was nearly three seconds better than the second-place hurdler. After crossing the finish line, an exhausted Belle laid on the track, soaking in the moment.

“That was me giving my praises and also me being tired,” Belle said with a laugh. “I did it, finally. I was able to put it all together in that race.”

Legendary head coach George Williams could only marvel at his star hurdler. He has coached many great athletes over his outstanding coaching career but says Belle is one of a kind.

“You can’t replace her,” Williams said. “I will have to find three or four runners just to take her place. She is definitely world class.”

Belle couldn’t have scripted a better way to finish her collegiate career.

“I am really going to miss running for St. Aug, being a Lady Falcon,” she said. “I learned so much and developed close relationships. It is time for the next step, though.”