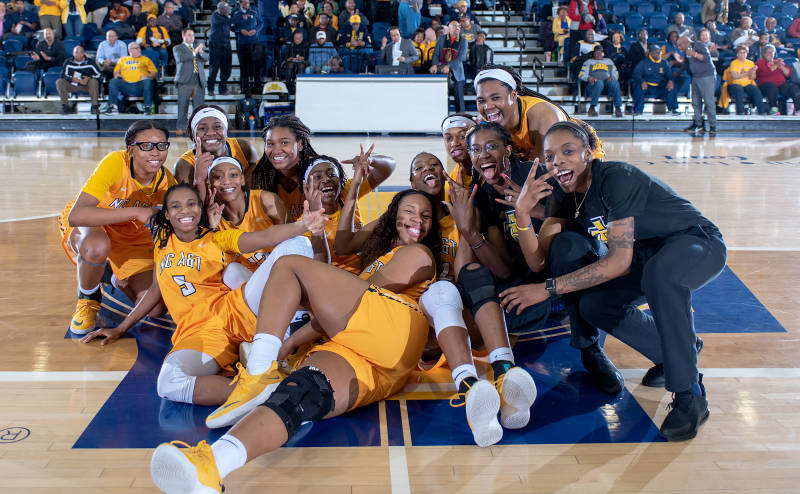 The NCAT women are unscathed since the new year rolled in.

It was hard to see this coming early in the season but the North Carolina A&T women’s basketball has swept through the Mid-Eastern Athletic Conference unbeaten.

With an 86-52 behind the woodshed win over arch-rival N.C. Central Thursday, the Lady Aggies remain unbeaten in the 2019 calendar year. N.C. A&T finishes the regular season 19-10 overall and 16-0 in the MEAC with its last loss coming on December 29 versus Yale.

This is the first time in history that the NCAT program finished the regular season undefeated in the MEAC and the first to do it since Hampton in 2013-14.

The 2018 portion of the season saw a little bit of everything including a loss to Division II Johnson C. Smith. The team got off to a 3-10 start with wins over Western Carolina, Winston-Salem State, and Florida Atlantic. The new year meant a new attitude for the Lady Aggies.

“We had a lot of things individually, as people and human beings that we had to overcome to reach this goal,” said N.C. A&T head coach Tarrell Robinson.

It all begins for the Aggies on Wednesday in Norfolk, Virginia as NCAT awaits the winner of Delaware State and NCCU. If they were to face the Lady Eagles again history is on their side. The Aggies are 18-1 against the Eagles since NCCU joined the MEAC in 2010-11.