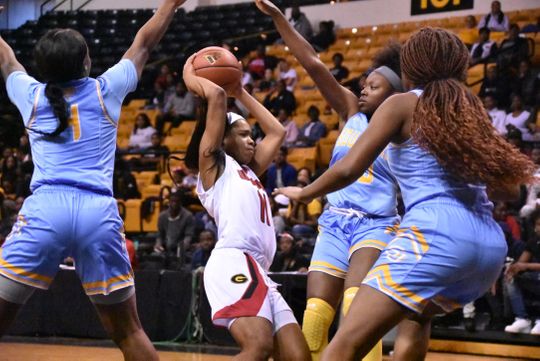 Triple double by Shakyla Hill is not enough against Jaguars.

The biggest rivalry in the SWAC was a game of runs that ended with Southern on top. Hill led all scorers with 20 points, which also included 10 rebounds, 10 assists, and 11 turnovers. Grambling led by as many as nine points in the first quarter but Southern got things together just before the half.

The Lady Jaguars outscored Grambling 22-13 in the second quarter en route to a 40-36 lead at halftime. The Southern lead grew as high as 12 points in the third quarter and it was enough to hold on for the win.

Brittany Rose led Southern in scoring and rebounds with 16 and eight respectively. Hill was 4-5 from the floor shooting, but shot a game high 17 free throws, connecting on 12 of them.

Over 1600 were attendance for this match up in Grambling, LA.