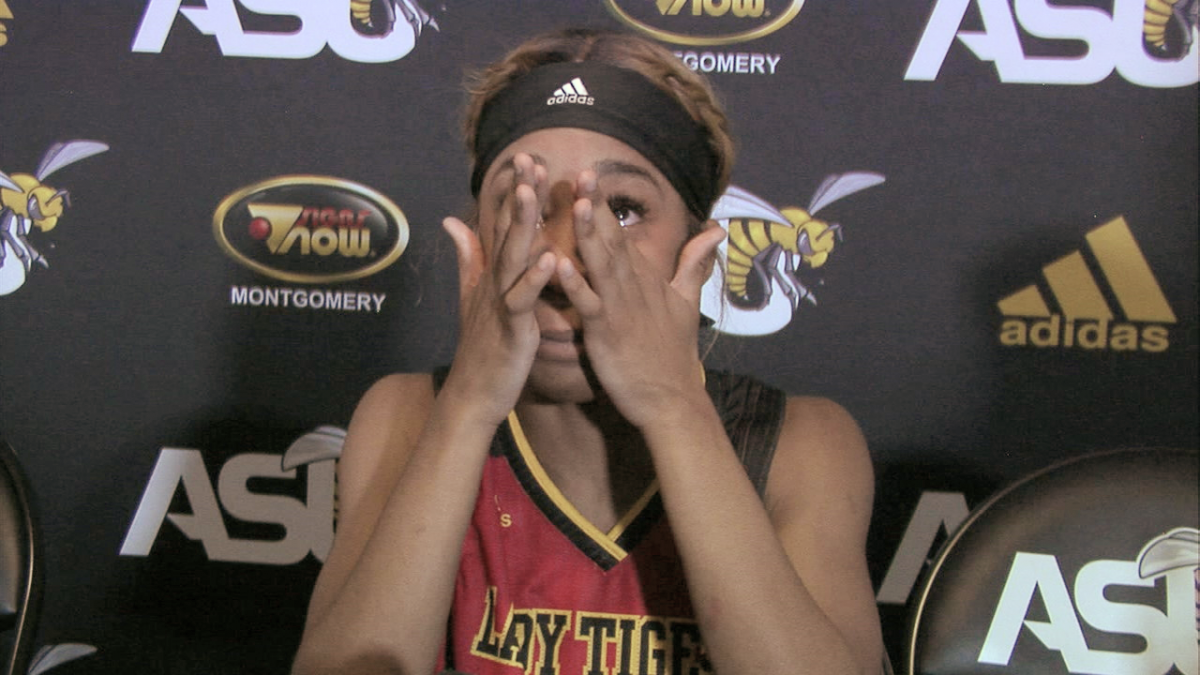 She makes news on the court, but this weekend her biggest move was at the podium.

MONTGOMERY, AL–Shakyla Hill was nearly unguardable last Saturday afternoon dropping a 32 points in a victory over Alabama State. she let her guard down completely when discussing her feelings toward Grambling State University.

Asking her about her school was a softball question that I threw in for good measure at the end of a post-game interview. We were alone in the ASU “green room” minus two photographers who were milling around just waiting for the Alabama State coach. I was mostly satisfied after peppering Hill for ten minutes about the nuances of her basketball game. Her game is like ten pounds of dynamite packed into a four-pound bag. After all the amazing things she did on the court, it was the explosive response of emotion that surprised me the most.

“I’m emotional, I cry a lot,” were the only three words Hill could find to come out of her mouth for thirty seconds.

I knew we were on to something special.

“Grambling has been everything to me. Everybody as a whole just feels like a family, regardless of wherever I go, whatever I do people at Grambling acknowledge me, they give me love, they show me ,” Hill continued on through her tears.

For the next 90 she delivered the best recruiting pitch that Grambling State could have ever dreamed of. There was no doubt that her choice of HBCU had built a permanent place in her heart.

I was pretty certain that once we published her interview to social media it would do well. But even I was surprised at the velocity of its popularity. In roughly 36 hours the video gained over 100,000 views and 1,200 shares. Which is definitely viral by our own modest standards.

The video, and more importantly the message behind it, spread organically. This wasn’t a case of us paying Facebook to gain viewership, we are too frugal for that anyway. (My biggest thrill was when former NBA Slam Dunk Champion and childhood hero Spud Webb gave the video a thumbs up.)

“I feel like I made the best decision ever. If I didn’t come to Grambling I probably wouldn’t be who I am right now,” Hill concluded.

But this wasn’t about having a cool video on our Facebook and Twitter pages. This was about the positive message of HBCUs spreading like wildfire for a couple of days. That’s what we want to happen after all.

Now that the viral moment has slowed down a bit it leaves us all with one very important question. What does your HBCU mean to you?