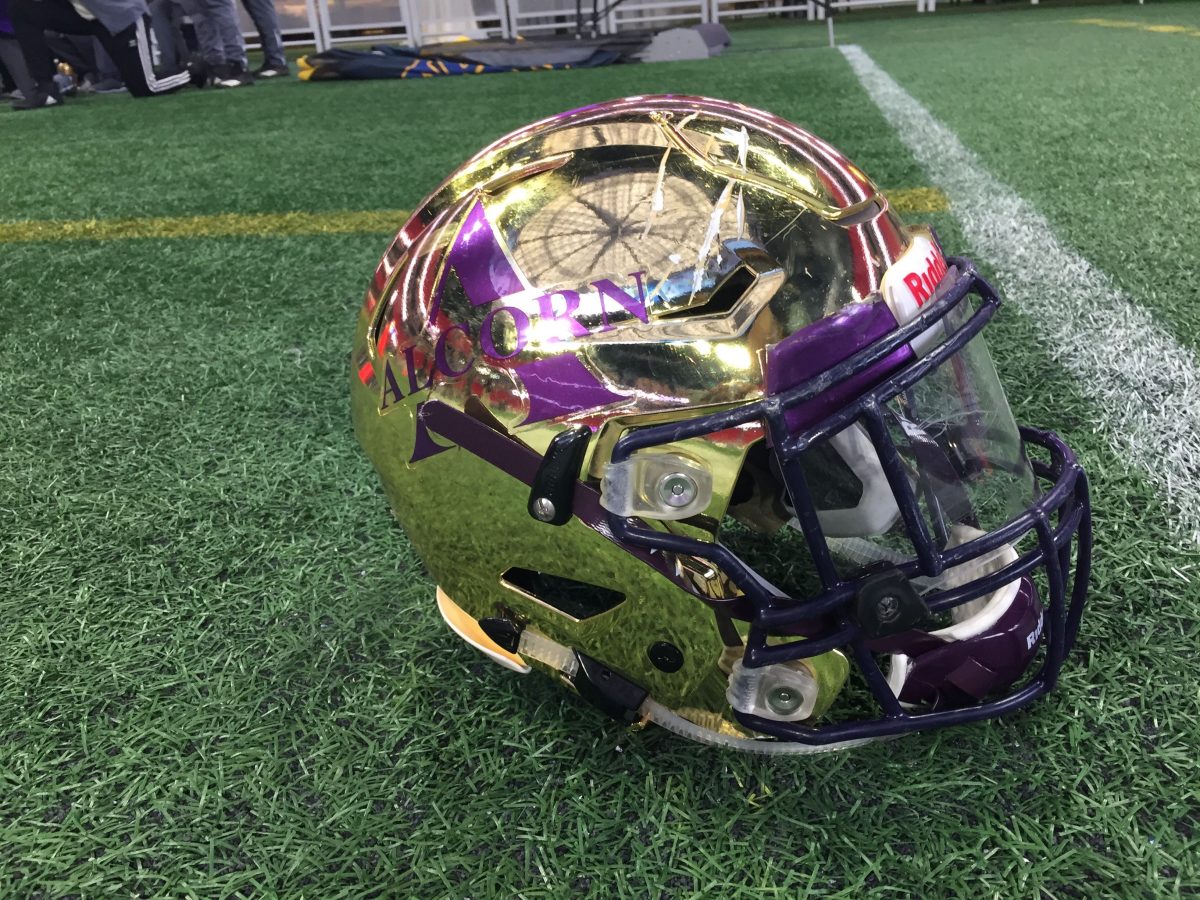 Noah Johnson will be playing for much more than just the win on Saturday.

Before Alcorn State junior redshirt quarterback Noah Johnson became the 2018 SWAC Offensive Player of the Year, he was a young freshman entering the woods of “The Reservation” in Lorman, Mississippi, looking to start his college football career as a quarterback, a position that some felt he would not be able to do on the collegiate level.

As a standout quarterback at Armwood High School, Johnson led his team to two straight appearances in the Florida state championship game. In his senior season alone, the Tampa, Fla., native threw for 1,458 yards, 25 touchdowns, and five interceptions.

Follow your dreams always no matter what anybody has to say !!! #ChampionshipMindset🏆 https://t.co/VkVP0iFRWB

Armwood is known for sending athletes to top-tier Division I football programs. For Johnson, he produced the stats, proved he was a winner, showcased his playmaking skills but was overlooked due to his size, which was very frustrating for him.

“A lot of schools overlooked me and wanted me to play wide receiver,” Johnson said.

Alcorn, however, took a chance on the 6-feet, 195-pound quarterback, offering him the opportunity during his last high school football game. And for Johnson, he was forever grateful.

As this year’s game rapidly approaches we wanted to provide a quick shout out to @MandelaMade for all of the 🔥 graphics throughout the season! You can check out more of his work at https://t.co/Ecrwcdiw4x #CelebrationBowl #AChampionWillRise pic.twitter.com/EFb6JYbsx3

“I would have liked to go to a big school but I feel like I came here for a reason,” Johnson said.

Traveling roughly 12 hours from the sunny skies and warm waters of south Florida to rural Mississippi, Johnson made his way to Lorman for his official visit to his new home in the summer of 2015.

Not knowing a single soul, Johnson had a transition to make. With any new phase in life, it requires one to adjust to new things.

As for Johnson, his transition to Alcorn would be a seamless one thanks to him meeting the person who would become his teammate during his official visit and eventual roommate, Braves wide receiver Corbin Johnson.

“Corbin was the first person I met when I came to Mississippi and he kind of took me under his wing and took care of me from the beginning,” Johnson said.

“He’s just a standup guy and somebody I can go to in a time of need. I call him my brother from another mother.”

From the two meeting during their official visit, their relationship grew on and off the field, something Corbin believes led to them becoming roommates later on.

“Once we came for freshman orientation, his mom and my sister and them just became connected,” Johnson said.

“It got to a point where Noah could go get picked up from the airport and stay at my house and I would not be there,” Johnson said.

Their family members began referring to them as Johnson and Johnson, like the baby powder. The rest was history.

From these humble beginnings as freshmen, Noah and Corbin’s relationship grew on and off the field.

For starters, they both witnessed the inaugural Celebration Bowl from the sidelines of the Georgia Dome as North Carolina A&T defeated Alcorn 41-34. Despite not playing in the game, Corbin said it felt like him and Noah played a part in the process of helping the team make a bowl appearance.

In 2015, the Braves won the SWAC East Division, won the SWAC Championship game and got to play in the first ever Celebration Bowl bringing lots of excitement and enjoyment around the program, one that was filled with lots of seniors and redshirt senior players that were getting ready to leave or had one more year of eligibility to play.

“It was crazy to feel what an actual bowl game felt like,” Johnson said.

“It was like we got to have this feeling again, like what are we grinding for and what are the early workouts for?”

In the next two seasons, however, Alcorn did not get the bowl game experience again, losing to Grambling back-to-back years in the SWAC Championship game.

Noah said losing in last year’s SWAC Championship game was a terrible experience, something that fueled him to be better and to push harder this season.

“I did not play in that game but it sucked really bad,” Johnson said.

“We did not put on the performance that we wanted to and that feeling was terrible.”

But, the Braves got their revenge against Grambling this season, defeating the Tigers 33-26.

“We did a lot better in playing our game,” Johnson said.

A game where Johnson threw for 160 yards, two touchdowns, and an interception, converting nearly 44 percent of his passes.

While it came so close to winning the first time the two teams faced each other, Alcorn finally earned that feeling again. On Saturday, however, to make that “feeling” a dream come true of winning the Celebration Bowl, the Braves must play a complete game in all facets of the game.

But, the Aggies’ defense is no pushover, entering the game ranked fifth in scoring defense (13.5 ppg) and second in total defense (200.2 ypg) in FCS.

This team has been through adversity and could have thrown in the towel, but they didn’t…we are going to do what we do and do it well….@CelebrationBowl is special. – Coach Washington. #AggiesAllIn #AChampionWillRise pic.twitter.com/5bVFjcLSZ3

As for Johnson, he knows the Aggies have a good defense but has stressed the importance of executing their game.

Noah also said it is important that the team lives for the moment.

“We know what’s at stake and the biggest thing is to take it all in because you don’t get these moments back,” Johnson said.

“When you have fun, good things happen. I really believe that and I feel how hard we’ve worked each and every week has paid dividends to our success.”

Alcorn, a team that has won five of its last six games since losing to Alabama State on Oct. 13 has seen lots of success. And while Noah will play on the field in Saturday’s bowl game, looking to lead his team to victory, his former roommate will be forced to remain on the sideline due to injury.

Corbin, who was Noah’s roommate last summer, has dealt with nagging back problems since high school that has impacted his football career at Alcorn.

“My sophomore year here, I started getting a lot of pain and I was playing through it,” Johnson said.

“Then, about every two or three days, I would be so sore that I could not even practice.”

And, things continued to get worse. The Jackson, Miss., native had to sit out in the spring of 2017 but then he came back stronger and played last fall.

Still playing through pain, he was active in the spring. But over the summer right before camp started, Johnson was forced to stop playing.

“Like the end of July was probably my last time and they (coaches) were telling me I could run, lift weights and be active in any kind of way,” Johnson said.

“I was going back and forth to the doctor for doctor appointments to get cleared. But as it goes, I left it in the Lord’s hands and I had to miss the entire season.”

However, Corbin’s injury has not stopped him from helping the other wide receivers playing on the field and helping Noah with executing plays.

“I see a lot of things on the field that they do not see,” Johnson said.

“Basically, I am probably the loudest one on the sideline, screaming coverages, screaming at the defensive back, calling his name and that plays a big part in everything.”

For Noah, he does not take this lightly, saying that friendships like his with Corbin have made a big difference.

“The quality of the team, the guys I have made friendships with, we’re like a family,” Johnson said.

“Everything we do here is a family and that’s one of the biggest things I can take from this program.”

The success, the comradery, the friendships will all be put on the line Saturday afternoon in Mercedes-Benz Stadium when the Braves take the field against the Aggies.

While this game is bigger in essence than any other game they have witnessed, the Johnsons – win or lose – will remember this moment forever. But for 60 minutes, one part of the Johnson and Johnson connection (Noah) will look to make the right reads for positive plays on the field while the other part (Corbin) will be the eyes on the field from the sideline, similar to how he looked out for Noah when they were freshmen coming to Alcorn on their official visit.

“I am just overwhelmed and blessed to be a part of this game,” C. Johnson said.

“Everything on my end is in God’s hands and all I can do is be that force from the sideline, let guys know we need you, we need somebody to make a play and be that voice.”

But Corbin also stressed the importance of the Braves receivers being at the top of their game on Saturday.

“We have to block on the perimeter,” Johnson said.

“We have to be physical. When it is your time, you have to make a play. When the ball is in the air, it is yours.”

As for Noah, he plans to let the game come to him and believe in the work that his team has put in to get to this moment.

.@BRAVESSPORTS head coach Fred McNair said: “These guys have done an outstanding job to get themselves here in the @CelebrationBowl! These guys deserve to be here.” pic.twitter.com/eJ1mRIP1Cu

“Coach McNair has coached me up on a lot of things but he has stressed to me to play my game,” Johnson said.

“We’ve worked really hard and I know how hard I’ve worked through the offseason and training. Hard work beats talent when talent does not work hard. You can’t cheat the grind and I feel like we have worked hard.”

The Braves hard work will be tested in a big way. Kickoff is set for noon eastern time.