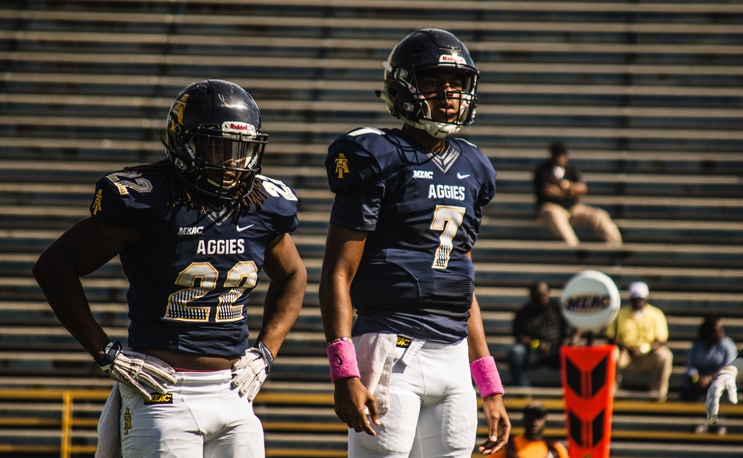 Lamar Raynard and Marquell Cartwright are hoping to end their A&T careers with another Celebration Bowl win.

Regardless of what happens on Saturday, it will be the last time Lamar Raynard and Marquell Cartwright put on an A&T uniform.

The two redshirt seniors from High Point will look to go out in style, hoping to lead their team to a third win at the Celebration Bowl and a third HBCU national title. After an up-and-down first three seasons for the duo, the past two years have allowed them to write their own pages in the program’s legacy.

Raynard and Cartwright arrived at A&T essentially as a package deal in the fall of 2014. At that point, A&T had not won a MEAC title in over a decade. Raynard redshirted his freshman year, while Cartwright played in relief of Tarik Cohen as A&T won a share of the MEAC title (along with four other teams). The 2015 season Cartwright sat out while Raynard found him self one of three quarterbacks to start for A&T as it again claimed a share of the MEAC title and then went on to win the inagural Celebration Bowl.

Things started to align for the pair in 2016. Cartwright was back providing a compliment to Cohen, while Raynard led the program to its first-ever win over an FBS program and a 9-1 start. But an injury kept Raynard on the sideline against rival North Carolina Central, leading to back-to-back blowout losses for A&T to finish the season.

Then came 2017, a year that will never be forgotten by the Aggie faithful. Raynard stayed healthy the entire season to win MEAC Offensive Player of The Year and Cartwight picked up where Cohen left off, leading the MEAC in rushing. More importantly, the team finished 12-0 behind the leadership of Cartwright and Raynard.

The 2018 season hasn’t been perfect, and both Raynard and Cartwright have had ups and downs. At one part Raynard was completing just 46 percent of his passes and Cartwright had an inconsistent first half of the season. But the duo saved their best for heading into the matchup Saturday with Alcorn State. The two only have four more quarters to play together, and they plan on making the most of it.