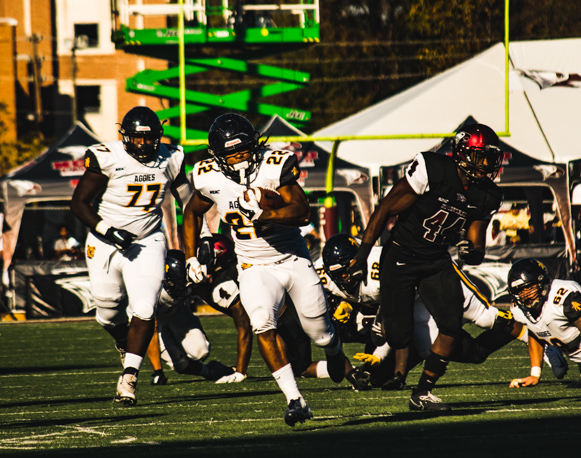 North Carolina A&T could hurt Alcorn State in a number of ways with a number of weapons in the Celebration Bowl.

It’s time for the season finale in Atlanta between the top teams from the MEAC and SWAC in the fourth annual Celebration Bowl. Since the bowl was created we have been blessed to witness some amazing games which all have been decided by seven points or less. This year looks to be no different as the North Carolina A&T Aggies take on the Alcorn State Braves.

The Aggies are making their third trip to Atlanta and are a 2-0 in the bowl game including a 41-34 win over Alcorn State in the inaugural Celebration Bowl in 2015. The Braves are back after a hiatus, and they’re looking to make a statement not only about football in the SWAC but also a statement to the world about Alcorn State football.

If you like defense, this is the game for you! The Aggies and Braves are both ranked in the top five nationally in total defense so points could be hard to come by. The Aggies are led by MEAC Defensive Player of The Year Darryl Johnson Jr who racked up 10.5 sacks and 15 tackles for loss this season. The Braves bring a front seven that might be the best in FCS Football. The Braves led the SWAC in sacks and tackles for loss and had three members of that front seven ranked in the top 10 of the conference in sacks.

Both teams are very talented. The Aggies are led by senior quarterback Lamar Raynard who was the offensive player of the year in 2017 and running back Marquell Cartwright who led the MEAC with over 1,000 yards rushing for a second consecutive season.  The Braves are led by SWAC Offensive Player of The Year Noah Johnson and running backs De’Shawn Waller who was the conference’s Newcomer of the year, and PJ Simmons. While both defenses are highly touted these offenses can be just as lethal.

The Aggies offense goes as the run game goes. They have a dangerous two-headed monster in the backfield with running backs Marquell Cartwright and Jah-Maine Martin and feature a power running attack. Here you see 5’9 210-pound  Cartwright power his way for an 8 yard gain

You’ll also see the speed of Cartwright on the same play ran later in the game as he goes 35 yards for a touchdown.

Raynard has dangerous weapons on the outside. Here you’ll see Raynard hook up with receiver Malik Wilson for a big game off of the play action pass.

You’ll see Raynard here go to his favorite target Elijah Bell who’s 6’2 and 220 and a mismatch for defensive backs in the redone.,This play results in a touchdown as Bell uses his body to box out the defender and uses his athletic ability to make sure he stays in bounds.

Raynard is also very athletic. He’s praised for his arm and accuracy but Raynard is athletic enough to pick up third downs with his feet if everyone is covered. Here last year’s Celebration you’ll see Raynard convert a crucial third down using his feet.

If you’re Alcorn State the keys for limiting this Aggies offense are to win the battles up front to slow down the power run, cover these athletic and rangy A&T receivers, be physical with Bell in the red zone and in short yardage situations, beware of the play action pass, and don’t forget about the athletic ability of Raynard.