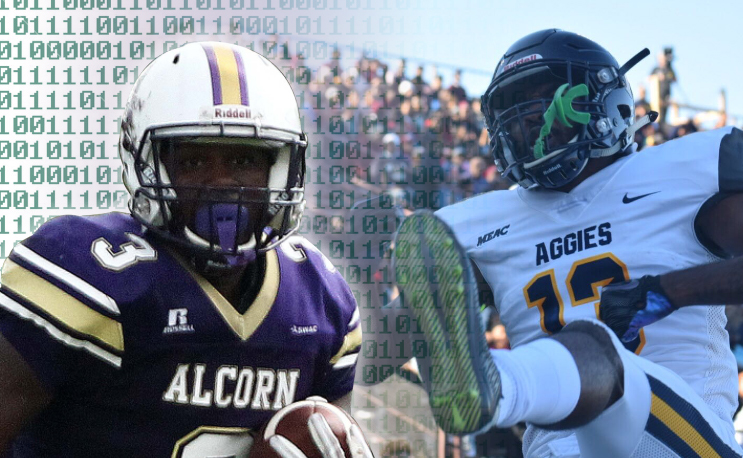 A side by side statistical comparison between NCAT and Alcorn State.

Roughly three years ago, the Air Force Reserve Celebration Bowl was in its inaugural season, hoping to begin a longstanding tradition of showcasing two of the best HBCU football programs on the national stage.

Played in the Georgia Dome its first year, the game drew more than 35,000 fans and has continued to increase since 2015. And in only a few more days, another “champion” will rise.

The 2018 Celebration Bowl features a rematch of the inaugural bowl game between Mid-Eastern Athletic Conference (MEAC) champion North Carolina A&T and Southwestern Athletic Conference champion Alcorn State. When the two teams met in 2015, the Aggies edged the Braves 41-34 thanks to a touchdown by then Aggies and current NFL running back Tarik Cohen, who recorded a 73-yard touchdown run.

North Carolina A&T (9-2, 6-1) finished the season ranked second in scoring offense (30.6 points per game) and first scoring defense (allowing 13.5 ppg) in the MEAC. The Aggies enter the game averaging 387.8 yards of offense (third in the conference) and giving up 200.2 yards on defense (first in the conference).

Alcorn (9-3, 8-1) will look to write the perfect ending to an outstanding regular season as the Braves make their second appearance in the Celebration Bowl. The Braves enter the game ranked first in scoring offense (33.5 ppg), scoring defense (21.3 ppg), total offense (475.2 ypg) and total defense (288.7 ypg) in the SWAC.

The SWAC champion Braves are here! Coach McNair greeted by officers from the @AirForceReserve upon arrival to Atlanta #CelebrationBowl #AChampionWillRise pic.twitter.com/DkX27afldP

Here is a breakdown of how the two teams match up statistically.

1st in offensive efficiency in SWAC

2nd in defensive efficiency in SWAC

2nd in interceptions (13) with three returned for touchdowns

1st in first downs in SWAC, 8th in FCS

1st in opponent first downs in the SWAC

3rd in third-down conversions in the SWAC

2nd in opponent third-down conversions in the SWAC

2nd in 4th down conversions in the SWAC

6th in total defense in FCS

13th in blocked punts in FCS

20th in first down defense in FCS

10th in completion percentage in FCS

12th in total offense in FCS

18th in scoring defense in FCS

15th in defensive touchdowns in FCS

8th in first downs in FCS

28th in turnovers gained in FCS

QB – Noah Johnson: Johnson was named the SWAC Offensive Player of the Year and has thrown for 1,944 yards and 15 touchdowns. The Tampa, Fla., native has also rushed for 960 yards (fourth in SWAC) and nine touchdowns, putting him at second in total offense in the conference.

RB – De’Shawn Waller: Waller was named the SWAC Newcomer of the Year, rushing for 1,048 yards (second in the SWAC) and 12 touchdowns, averaging 6.2 yards per carry and 116.4 yards per game.

RB – P.J. Simmons: Simmons has rushed for 729 yards and four touchdowns, averaging 5.2 yards per carry and 60.8 yards per game.

WR – Raidarious Anderson: Anderson leads the team in receiving yards with 502 and three touchdowns, averaging 15.7 yards per catch and 45.6 yards per game.

LB – Solomon Muhammad: Muhammad has recorded 58 tackles with 23 being solo, 5.8 tackles per game, four sacks and eight tackles for a loss.

OL – Micah Shaw: Shaw was named the 2018 Offensive Lineman of the Year in the MEAC.

DL – Darryl Johnson: Johnson is second on the team in tackles with 47 total, with 29 being solo averaging 4.3 per game. Johnson is also first in the conference in tackles for a loss (18.5) and first in sacks (10.5).

WR – Elijah Bell: Bell is the second in receptions (42) and yards (473) on the team, averaging 11.3 yards per catch and 47.3 yards per game. Bell has caught five touchdowns this season.

QB – Lamar Raynard: Raynard has thrown for 1,607 yards, 17 touchdowns, five interceptions (4th in the MEAC) and sixth in total offense.

DL – Julian McKnight: McKnight is second on the team in tackles for a loss (9.5) with eight being solo.

LB – Antoine Wilder: Wilder leads the team in tackles with 62 with 34 being solo, averaging 5.6 per game.

RB – Jah-Maine Martin: Martin is the second leading rusher on the team with 625 yards, seven touchdowns, averaging 56.8 yards per game.

WR – Zachary Leslie: Leslie leads the team in receptions (44) and receiving yards (557) and eight touchdowns, averaging 12.7 yards per catch and 50.6 yards per game.