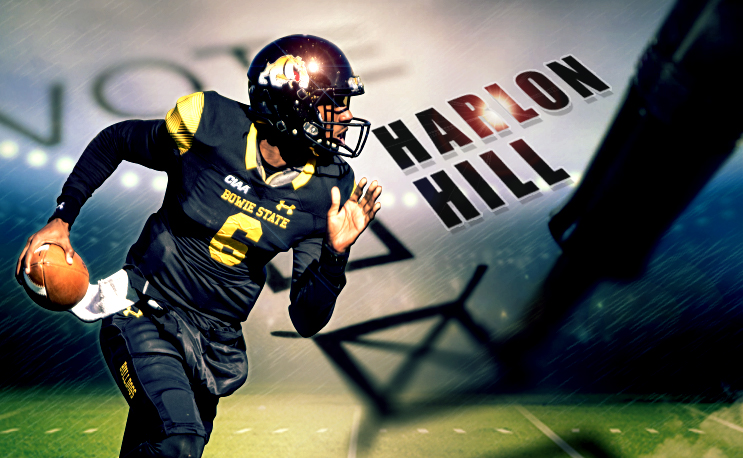 Will Amir Hall win the Harlon?

Can the Bowie QB transcend the accolades of being just a great HBCU QB?

The 2018 Harlon Hill Trophy will be presented on December 14, 2018.  For the second year in a row, Bowie State Quarterback Amir Hall is a finalist for the trophy, which is annually awarded to Division II’s Most Outstanding Player.  Hall finished fifth in voting last year, behind (in order) Texas A&M-Commerce Quarterback Luis Perez (winner), Gannon Running Back Marc Jones, Slippery Rock Defensive Lineman Marcus Martin, and Shepherd Quarterback Connor Jessop.

While Hall’s performance last year was , this year was even more productive.  Here is a comparison of the two seasons:

Bowie State’s offensive philosophy really leaned heavily on Hall this year given that the running game wasn’t as potent as last year. The reliance on Hall resulted in him leading Division II in total offense and second in total offense per game. Two other finalists have over 4000 yards in total offense: QB Isaac Harker of Colorado Mines and QB Jayru Campbell of Ferris State.

So how does this voting thing work?

The award is presented the night before the National Championship game. The Harlon Hill Trophy is voted on by Sports Information Directors across the country. That means the CIAA (and SIAC) SIDs will have a seat at the table when it comes to voting for the winner. Past history has shown that voters from a regional and national level don’t pay much attention to the conference or seem willing to support more visible teams.  We’ve already seen this year:

Valdosta State QB Rogan Wells selected as QB ahead of Hall for the D2CCA All-Super Region II team.  I suspect the outcome of the second round Bowie State-Valdosta State game attributed to this outcome. Moreover, Wells’ numbers are behind the CIAA’s Bryce Witt of Chowan (who was second in the CIAA in several passing categories has a higher total offense per game average and was responsible for more points scored per game than Wells)

Amir Hall left off of the AFCA All-America team.  It’s the second straight year that the star QB was left off this team.  AFCA’s voters opted to recognize Travis Tarnowski of Ashland as a 2nd team quarterback last year. This year, that voting block selected Layton Rabb of Midwestern State as the quarterback. Rabb finished fifth in total offense, behind Ferris State’s Campbell….and both Hall AND Witt.  Not to mention, Rabb was responsible for less points than either of the CIAA’s top two quarterbacks.

Another point of contention is that other CIAA standouts are ignored on that national stage.  A really good example would be Virginia Union’s RB Tabyus Taylor being left off the AFCA list. Taylor finished tops in the country in all-purpose yards this year despite only having 61 return yards (and by the way that return ended up as a touchdown) and was second in scoring by a non-quarterback.  Last year’s CIAA Player of the Year, Virginia State’s RB Trenton Cannon also lead the country in all-purpose yards and scoring, and was also left off of AFCA’s list.

What about the History of Harlon Hill winners?

While there are nine finalists from the four Super Regions, I think there are only six threats to win the trophy outside of Hall.  Here is a comprehensive view of who I think is his competition (games through December 9, 2018):

Why does Hall deserve to win the Harlon Hill award?

As a reference point: Hall actually lead the country in total offense at the end of last year’s regular but fell behind after Bowie made a first-round playoff exit. Bowie State’s entrance into the second round of the Division II playoffs makes a difference this season, as all of the winners since 2009 were on teams that advanced to the second round of the playoffs. I included Rogan Wells in the above list not because I think he is a threat to finish higher than Hall based on individual play but because there seems to be a desire to unfairly compare head to head game results despite this award being on individual performance (let’s not forget that Hall had 256 total offensive yards to Wells’ 245 in the Bowie State-Valdosta State game). McLaughlin’s numbers are off the charts; however, context is needed to understand the circumstances behind his performance.

McLaughlin has rushed 378 times this year. The rushing attempts tops in the country, but more than 10 other running backs have a higher rush per average including finalist Watson. Moreover, Watson has scored more touchdowns than McLaughlin, which does diminish McLaughlin’s resume a bit. Can I mention here that neither Watson nor McLaughlin lead the country in all-purpose yards per game; instead, that distinction goes to fellow CIAA compatriot RB Tabyus Taylor at Virginia Union (1546 rushing yards, 355 receiving yards, 61 return yards, 1962 total 196.2 average). Taylor was not even among the 37 nominated for the Trophy, which makes me think that the RBs may not be favored in this year’s Trophy. Jones’ performance on defense is absolutely astounding, especially in a top tier league such as the Lone Star Conference; however, historically a defensive player has never won this award.

Where will Hall finish?

Hall most certainly has a case to win the award outright.  Keep in mind that a relatively early playoff exit has not kept a player from winning the award.  Zulli’s win in 2012 came after being unceremoniously dumped out the second round by national runner up Winston-Salem State. Only two players that I can recall (Washburn (Kansas) QB Dane Simoneau in 2011 and West Liberty State QB Zach Amedro in 2009) have been finalists for the Trophy and lead the country in total offense but didn’t win the overall award.  I suspect Hall’s top two challengers will be Campbell and McLaughlin. Anything less than a top three finish would be very disappointing for the CIAA’s all-time leading scorer and passer. A finish higher than fifth would be the closest a CIAA player has come to ever winning the award, but may leave us wondering: What does it take for the CIAA to have a player win the Harlon Hill Trophy?

Will Amir Hall win the Harlon?