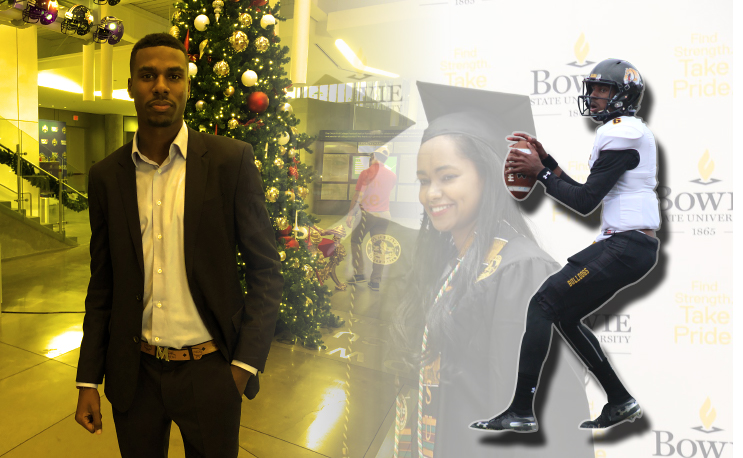 Three big things that could make it a perfect weekend for Amir Hall.

ATLANTA–This is a weekend that Bowie State quarterback Amir Hall probably would have circled on a calendar if people were prone to still use them. On Saturday the NCAA Division II football championship game will be played, but that’s not part of the equation. The Bulldogs were eliminated in the second round, but this could still be the  mother of all weekends for Hall.

For one night only

I caught up with Amir in the lobby of the College Football Hall of Fame in Atlanta on Thursday night. He flew in earlier that day to participate in Celebration Bowl activities with the Black College Football Hall of Fame. I had been holding his National Player of the Year trophy for the last week waiting for him to make the trip down south. We had planned for a highly produced presentation on Friday night in Atlanta but didn’t realize that Amir was running the two-minute offense during his visit. He was flying back out that same night in order to make his college graduation on Friday.

“Graduating in three years that was a lot to do this semester. Taking 18 credits, four summer classes. Preserved through it all, I’m just able to see my graduation day and graduate early,” Hall said.

I literally bailed on my macaroni and cheese special, crammed the kids in the car and navigated Interstate 75 traffic to get downtown before he left.

I spent all of three minutes with Amir giving him his award, which never left the shipping box, and squeezing out a quick interview on camera.  Let’s modestly suggest that winning the Protect Your Skull/HBCU Gameday Offensive Player of the Year award for two years in a row is a big deal. That means trophy on Thursday, a diploma on Friday.

“People back at Bowie supporting me and believing in me all my four years, I can’t thank those guys enough.”

Leave the politics to you guys

But it doesn’t stop there. Later on Friday afternoon, the winner of the Harlon Hill Trophy will be announced. The Harlon is the Division II equivalent of the Heisman Award. Kris Ferguson wrote a detailed piece on Amir’s chances of winning the award and appeared on our podcast this week to discuss it.

“I”m not even really thinking about it. I’m in a great situation right now, I’m just going to take care of business and let all of the politics and the analytics, yall go ahead and figure that out. I’m loving my life right now.”

Before the sun sets on Friday it could be a trio of accolades for the best Bulldog of all time. The HBCU Player of the Year was a no-brainer, the college degree was all brains, and a potential Harlon Hill could change the way a lot of people think about HBCU football.

Good luck to you Amir and get some rest. It’s been a hell of a weekend already.