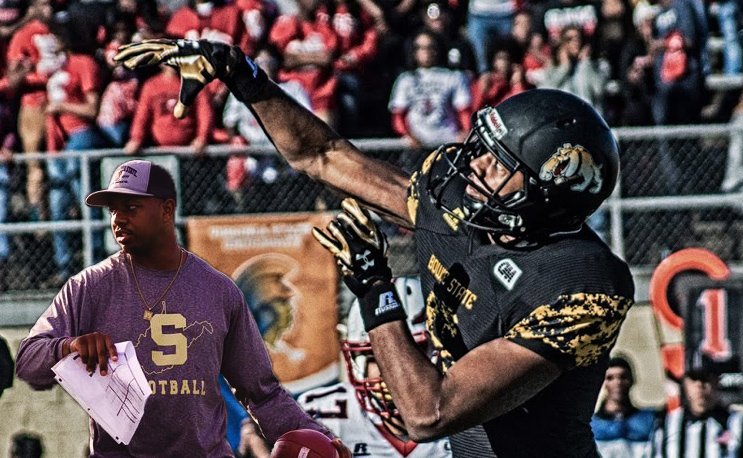 Every prospect thinks they are a Division I player, but most never make it to that level.

Signing Day is here fellas and everybody is signing to Florida State, USC, Notre Dame and Ohio State! We are all going “D1!”

That’s everybody’s dream! Sometimes reality sets in and you are not the Division 1 athlete that you thought you were, or at least the offers don’t come in. This was true for me as a high school senior coming out of Suitland High school in 2012.

Ending my senior season of high school football in December 2011 after having an all-state season for the second year in a row, I was for sure going to play D1 ball after graduation. You couldn’t tell me otherwise, because I wouldn’t listen to you. I ignored some of the D2 teams such as Bowie State, St.Augustine, Shepherd and West Virginia State who were giving me attention to hold out for something “bigger. I was looking for love from someone who didn’t love me back. There was someone who was loving me and I didn’t want to love them back until it was almost too late. When I decided to go to Bowie State University it was the best decision I’ve ever made in my life to this very day.

Everybody has those dreams of going D1 and wanting to reach that ultimate goal. The harsh reality, not everyone is going D1. Everybody has their reason: “I don’t have the grades”…”my coaches aren’t sending my film out”…or the most famous line “It’s politics”. Being a former student-athlete, and now a coach, I’ve heard it all.

By contrast there were nearly 1.1 million high school students who played 11-man football in 2015-16. Lets say that 1/4th of these are high school students. That means more than 250k seniors are among them. Even if only half of them have a goal of being college athletes, that’s 125k kids competing for 5,000 spots at any given year.

The crazy part about it all is that it’s not the end of the world! Talk to those schools who love you for you! The recruiting process is the start of finding a relationship that you want to see last four-to-five years.

Go Where The Love Is

It’s like trying to date someone who isn’t showing any interest in you, but you keep reaching out to them. The person who is showing interest in you who may not seem as attractive at first glance is there trying to care for you and love you. Then you end up in the relationship with that person you believed you loved but, they don’t love you back like you thought they would. Then you look at the person who wanted you at first having fun and treating someone else the way you should be getting treated. By no means am I telling you to settle and limit yourself, but I am telling you to give some attention to those who love you back.

There is a belief that kids have that they need to go DI to go to the NFL. This couldn’t be further from the truth. Just look at Trent Cannon who went to Virginia State and was drafted by the New York Jets this April. Former Bowie State tight end Khari Lee was with Bills this past year and former Fayetteville State receiver Chris Hubert spent part of 2016 with the Arizona Cardinals. And then there is Amir Hall, who will definitely have his shot after Bowie State’s run is over. That’s just to name a few of the recent ones.

Go Where You Can Play

If you can play they will find you! The key word in that last sentence is PLAY! You have to play to have a shot at the next level. There are guys who say they are big-time athletes but aren’t playing that much. Are you really D1 or just enjoying D1? Scouts will always go get the guy who is playing or showing they can play. They rather find out if they can play at the next level in a rookie camp rather knowing you can’t play because you were on the bench at the D1 level.

Don’t Compare Yourself To Others

My last and final tip is finding the right school that fits you period. Don’t get caught up in your peers going to big-time schools, what’s good for them may not be good for you. This falls right in line with what I said before in finding the school that shows you love whether that’s in terms of interest, communication or money.

God sometimes has to start you at a “so-called” small place before handing you something bigger. So many guys miss out on blessings because they chased the D1 dream and ignored the school that fit them best, because its a D2, D3 or even an NAIA school. Don’t miss out on your blessing because you’re letting your pride get in way chasing a limited spot that might not be what you think.  Just ask the hundreds of players who leave D1 spots and come to other levels every year.

Bottom line: If you are as good as you say you are, go prove it and make every D1 school who didn’t give you a chance regret it!

Nyema Washington is a former quarterback and coach at Bowie State University. He just finished his first season at West Virginia State.