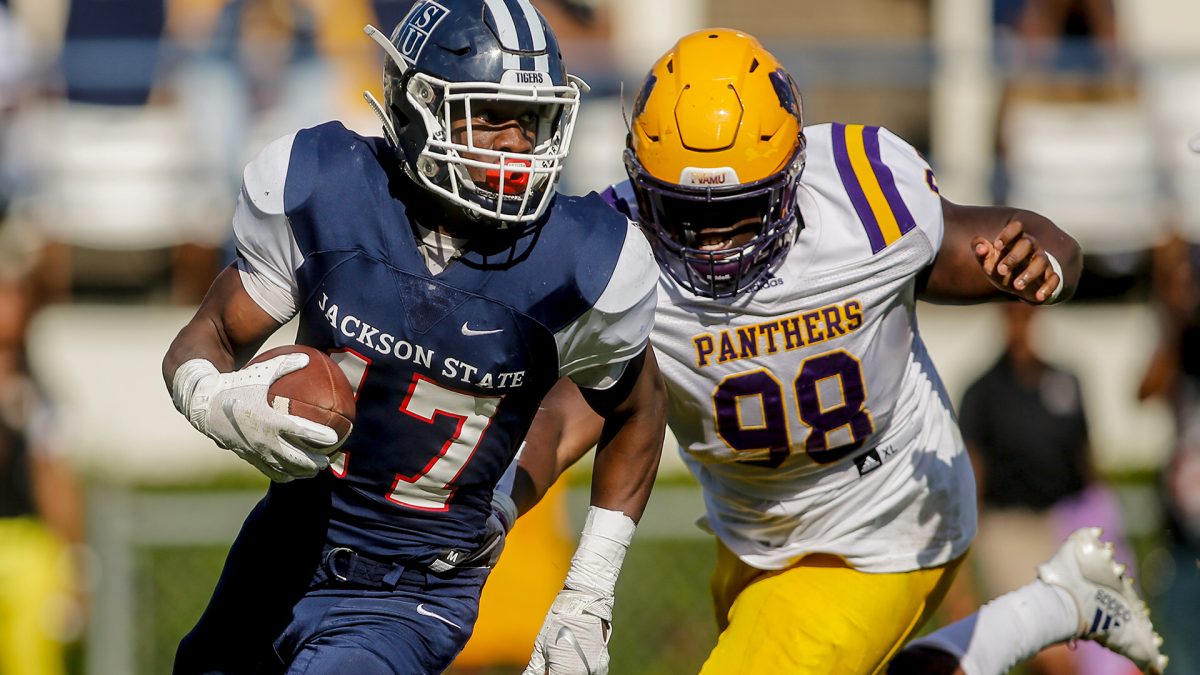 JACKSON, MS– Less than a week after firing its coach and lot of question marks surrounding the football program, the Jackson State football team did what many fans expected them not to do by defeating Prairie View 34-28 on Senior Day Saturday afternoon at Mississippi Veterans Memorial Stadium.

Tigers’ quarterback Jarrad Hayes finished 17-for-27 and threw for 150 yards and a touchdown in his final home game in a Tigers’ uniform. The rushing attack – one that averaged 127.8 yards per game entering Saturday’s contest – recorded 206 yards on the ground behind the play of running backs Jordan Johnson, Quitten Brown and Juavon Brown.

In front of a crowd of nearly 21,800 in attendance, Jackson State (4-4, 3-2) zoned in on the priority of winning the game against a stumbling Prairie View team instead of focusing its energy on the uncertainty surrounding its last three games of the season with an interim head coach. And, for JSU, it all worked out in its favor.

.@HBCUGameday If I had to describe the atmosphere of fans inside Mississippi Veterans Memorial Stadium after a Tigers win in their last home game of the season:

Let’s see what happens next week when Tigers go on road to face @alabamastateu . pic.twitter.com/gQmkOKCHko

With the win, Tigers interim coach John Hendrick picked up his first win at the helm. JSU remains in third place in the SWAC East and in the hunt to represent the division in the 2018 SWAC Championship game.

As a unit, the Tigers connected on all five scoring opportunities in the red zone and converted 7-of-14 third-down conversions, something that has been a huge issue for the offense all season. Along with a dominant offensive performance, the Tigers “Dark Side” defense forced the Panthers into critical turnovers that allowed them 10 points, helping the Tigers secure the win.

Jackson State put the first points on the scoreboard with a 13 play, 61-yard drive. The Tigers converted on a huge fourth down conversion with a pass from Hayes to Q. Brown for 13 yards to get in the red zone at the Panthers 23. A couple plays later, Hayes connected with Romello Shumake on an eight-yard touchdown pass to give JSU a 7-0 lead.

After Prairie View’s Kristian Mosley fumbled the ball on the ensuing kickoff, JSU recovered and took advantage of the good field position. Brown punched in the first of his two touchdowns from the Panthers as the Tigers led 14-0.

With under six minutes to play in the opening quarter, Panthers quarterback Jalen Morton hoped to get the Panthers’ offense moving but instead was intercepted by Tigers defensive back Ryan Theyard, who returned it 37 yards to Prairie View’s 8. The Panthers’ defense held the Tigers to an 18-yard field goal by Christian Jacquemin.

After a three and out by Prairie View, Jackson State – on its fourth consecutive drive – found the end zone again on a 59-yard touchdown run by Johnson to put the Tigers up 24-0 with 14:39 to play in the second quarter.

But, the tide would soon change in favor of the Panthers.

The Panthers made a quarterback change, bringing in Trazon Connley, who helped lead off the 11 play, 56-yard drive. Prairie View converted on a huge 4th and 10, using an 18-yard run by Jaylon Wooten to move the ball into JSU territory. Connley connected with Markcus Hardy on a six-yard touchdown pass to put the Panthers on the scoreboard as they trailed 24-7 at halftime.

In the third quarter, Jackson State capped a 13 play, 64-yard drive with a 20-yard field goal from Jacquemin to add to its lead. After Jacquemin’s field goal, the two teams exchanged possessions before the Panthers would begin their fierce comeback in the game.

With 7:29 to play, in what looked like would be a three and out for Prairie View, the Panthers turned a 4th and 1 possession from their own 28 into a 72-yard touchdown run by Connley to cut the deficit to 27-14.

Jackson State continued to manage the clock and put together another long drive that started in the final minutes of the third quarter and ended in the beginning of the fourth. The Tigers ran the ball with Quitten Brown on nine out of 10 plays as he scored on a two-yard touchdown run to give Jackson State a 34-14 lead.

The Tigers were in full control but the Panthers would not give up. Prairie View scored on its next drive rather quickly as Connley connected with Zarrian Holcomb on a 21-yard touchdown pass that took off 3:04 off the game clock.

Prairie View, then, forced JSU into a three and out and started its next drive at the Tigers 40. Connley attempted to put the ball in the air but was picked off by Tigers defensive back CJ Holmes, with 7:32 remaining in the game.

JSU took over and began moving the ball down the field before the Panthers forced JSU’s Juavon Brown to a fumble, setting up the Panthers with good field position from their own 46.

Prairie View weaved together a series of plays in which Connley led the offense down the field to the JSU 11, leading to an 11-yard touchdown pass to Holcomb with 2:45 to play.

Panthers failed to recover the offside kick, allowing the Tigers to secure the victory.