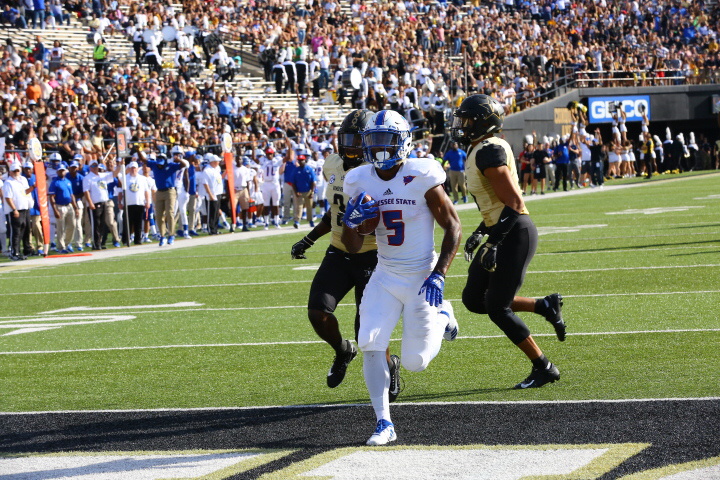 The Tigers led in the fourth quarter against their cross town SEC opponent.

NASHVILLE–Tennesse State’s only FBS opponent this season is cross-town rival Vanderbilt. The schools are within 15 minutes of each other and rival may be a reach but let’s roll with it. However, the pride of Nashville is on the line whenever they do meet. While Vandy has a bigger platform, Tennessee State’s success and following in the Nashville area cannot be overshadowed. The schools clashed on Saturday in an instant classic. TSU(2-1) went blow for blow with Vandy(3-2) but lost, 31 to 27.

Demry Croft set the tone in the first half. After a scoreless first quarter by both teams, Croft completed two touchdown drives in the second quarter. Vanderbilt fought back as well but TSU held on to a 13-10 lead at halftime.

Coming out for the second half, Vanderbilt amped things up. Kyle Shurmur and the Commodores went on a 76-yard drive early in the 3rd, making the score 17-13. Two minutes later, Ke’Shawn Vaughn busted through TSU’s defense for a 78-yard rushing touchdown. As we’ve seen with a few FBS vs HBCU matchups this season, a newly made deficit can be a turning point that causes teams to quit. Not the Tigers, they fought right back.

TSU went on separate 73 and 72 yard drives that both ended in touchdowns, making the score 27-24 halfway through the fourth quarter. But two minutes later, a 68-yard touchdown pass by Vanderbilt put TSU in a 4 point hole. The Tiger’s offense drove down the field again, making it to the Vanderbilt 15-yard line. But an incompletion on 4th down ended things for the Tigers. Vanderbilt held on to win, 31-27.

Despite the loss, TSU had a major performance on a national stage. TSU QB Demry Croft went 22 for 31 for 269 yards passing. His three touchdowns were a major help as TSU’s rushing attack was nowhere to be found. Treon Harris had 8 receptions for 109 yards as well. On the defensive side, Terry Straughter and Dajour Nesbeth both had interceptions for the Tigers.