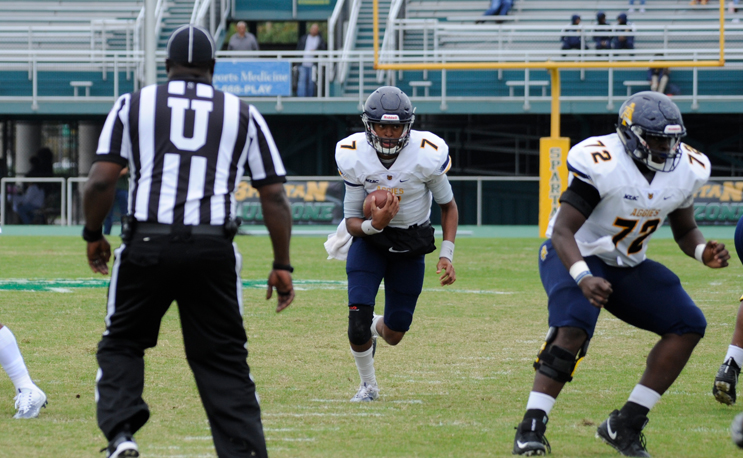 North Carolina A&T hasn’t had a lot of time to lick its wounds as it prepares for a desperate SC State team.

Perhaps the best thing about North Carolina A&T’s 16-13 loss to Morgan State was the fact that it didn’t have a lot of time to sulk.

A&T heads back to BB&T Stadium for a Thursday night matchup against rival South Carolina State just four days after suffering its first defeat in over a year.

“This short week, we’re gonna have to put an emphasis on a few things,” A&T head coach Sam Washington said. “Fundamentals and technique, I think showed in the ball game, as well. I think we can be a lot more fundamentally sound than we were.”


Washington pointed to missed tackles and missed blocks as opportunities the Aggies let slip away.

A&T’s offense struggled on Saturday, particularly quarterback Lamar Raynard. The senior from High Point, NC went just 4 for 15 passing and no touchdowns while throwing two interceptions. He was benched in favor of Kylil Carter, who also finished the ECU game. Despite his struggles recently, Raynard is 28-1 as a starter and he will make his 30th start Thursday against SCSU.

SCSU is coming off a tough loss to a MEAC opponent as well. Norfolk State came into Orangeburg and beat the home team 17-7 in a game that, like Morgan State’s win over A&T, did not count in the MEAC standings.

The Bulldogs are led by Buddy Pough, the longest-standing coach in the MEAC. He and his team will look to end a three-game skid to their rival and get their first win of the season. He knows from experience, that won’t be easy, especially after a loss.

A&T has been such a good team in our league so far this year that we were really surprised when we got the news (of Morgan State’s win).

As for the short turnaround for his squad, Pough doesn’t sound worried.

“I kinda think that it might be a good thing for both of us to have a quick turnaround. You don’t get a lot of time to brood over the loss that you just had in the previous game. It gets us back in the swing of things and it creates a sense of urgency.”