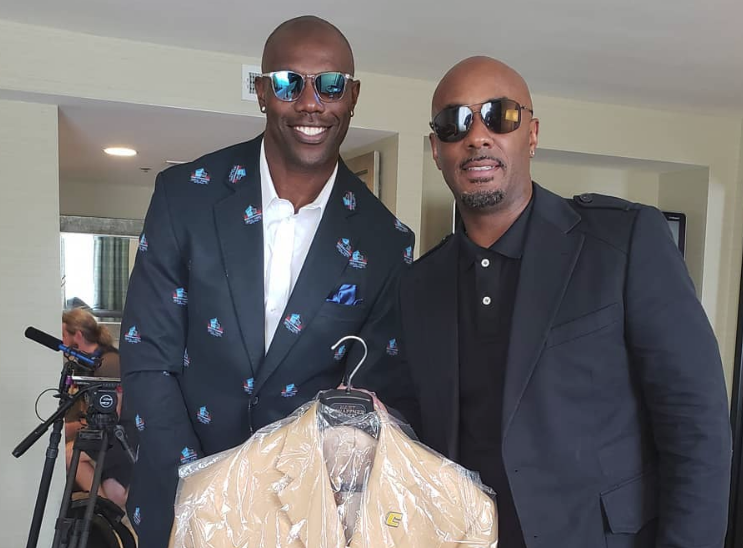 Dave Brown played basketball at Morehouse College in the early 1990s but made his name in Los Angeles. The actor and film industry veteran is great friends with celebrities like Jamie Foxx, Morris Chestnut, and Terrell Owens.

When Owens decided to throw his own Hall of Fame ceremony there was one thing that he couldn’t control. How was he going to get the jacket from Canton to his personal ceremony at his alma mater, the University of Tennessee at Chatanooga?

In steps Dave Brown.  On Saturday he traveled from Canton, Ohio, to Chattanooga via Atlanta to make the timely delivery of Owens’ gold Hall of Fame jacket before his 3:17 p.m. speech. Brown’s adventure was chronicled by Vaughn McClure in an article on ESPN.com.

Congratulations to my bro @terrellowens on becoming a #HOF F I brought my bro his jacket from Canton Ohio to Chattanooga Tennessee so he can be Honored at his College in the HOF. #igotthejacketthere God is Great! I save the Day!

The jackets were handed out in Canton on Friday night at a formal dinner. The original plan was to mail Owens his jacket on Saturday but Brown finessed the situation apparently. He was at the event with Ray Lewis and had a conversation with the Hall of Fame staff. After everyone else in attendance received their jackets, the hall of fame staff agreed to give Owens’ jacket to Brown.

Brown reportedly partied with Ray Lewis until 4 a.m. on Saturday morning. Maybe it was just a long conversation knowing Lewis. Afterward, Brown scurried directly to the Akron-Canton Airport and nabbed the last seat on a plane headed to Atlanta.

“I got the one seat that was left on the plane. The crazy part was that I’m walking around and nobody knew I had the gold jacket.”

Congratulations to my Little bro @raylewis on entering into the # HOF. Bro was a honor to be a part of this great moment in your life! Love ya bro! Great Speach today!!!!!

Once Brown arrived in Atlanta there wasn’t an early flight headed to Chattanooga so a driver took him there instead. Chattanooga is roughly two hours north of Atlanta so that wasn’t too bad. Brown arrived at 12:30 p.m. with plenty of time to spare for Owens’ personal ceremony.

“D-Brown, he made it happen. He was there. That just shows you really what true friends that I have. He didn’t have to do it, but he knew this was important for me,” Owens told ESPN.

For David Brown, it’s the assist of the summer as a Morehouse man comes through in the clutch.