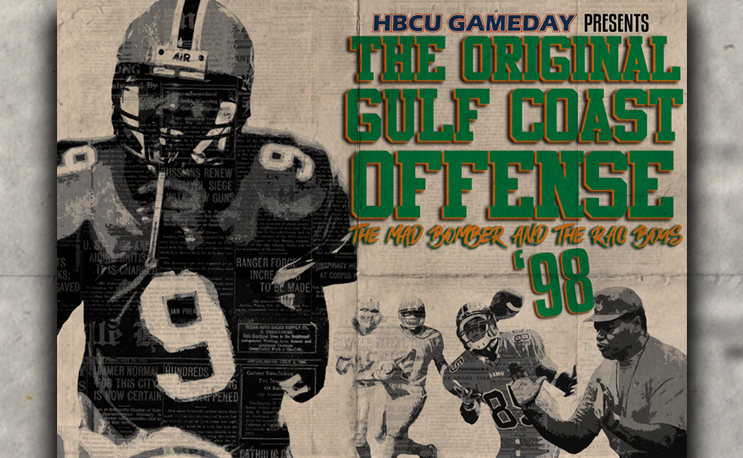 The Gulf Coast Offense was birthed at Florida A&M. Twenty years after Pat Bonner and the RAC Boys burned through the MEAC, HBCU Gameday brings this story to light.

CHARLOTTE, NC — The 1998 Florida A&M Rattlers took the MEAC and Division I-AA by storm with an iconic team led by a legendary coach and a quarterback with something to prove and went on to re-write the history books with a flair. It was arguably the high-point of the “Gulf Coast Offense” era of FAMU football under head coach Billy Joe, one of the most innovative offensive minds in college football history.

HBCU Gameday proudly presents “The Original Gulf Coast Offense: The Mad Bomber And The RAC Boys.” This Wali Pitt film, produced by Steven J. Gaither and narrated by Tolly Carr is the first of a multi-part series on those legendary FAMU teams which combined near flawless execution with an offensive flair closely associated with the state of Florida but uniquely FAMU. The 23-minute film will debut on August 8.

A filmmaking veteran of more than a decade, Pitt came into the project with fresh eyes and quickly became immersed in the high-scoring, swag-heavy Rattlers of that era.

“The 1998 season with Pat Bonner at the helm was really just the tip of the Gulf Coast iceberg, when you look at what they did in 1999 with JaJuan Seider, and then the Quinn Gray Era, and eventually how it all came apart plus if you look at the genesis of how it came to be, you have a really great four or five part series that needs to be told,” Pitt said. “Steven and I have already begun putting the pieces together to make those episodes a reality, hopefully, this can be the start of something huge for HBCU sports and the telling of our stories in our voice.”

Gaither, Gameday’s founder, echoed Pitt’s thoughts on this project as well as future films on HBCU legends both known and forgotten.

“Telling the backstory of black college football has been a passion of mine even before Gameday,” Gaither said. “It is important that as we promote the present and prepare for the future we praise the past. As a black-owned media and tech company in 2018, it’s also important that we not only tell our story but sell it so that many of our other legendary players, coaches and teams can get their roses while they are here and have their stories told the right way. Wali has taken this thing beyond my furthest dreams and I still know the best is yet to come.”

“The Original Gulf Coast Offense: The Mad Bomber And The RAC Boys” will premiere on HBCU Gameday.com and Roku TV platforms on Aug. 8. Subscribe for additional information and content on this and other HBCU Gameday Projects.