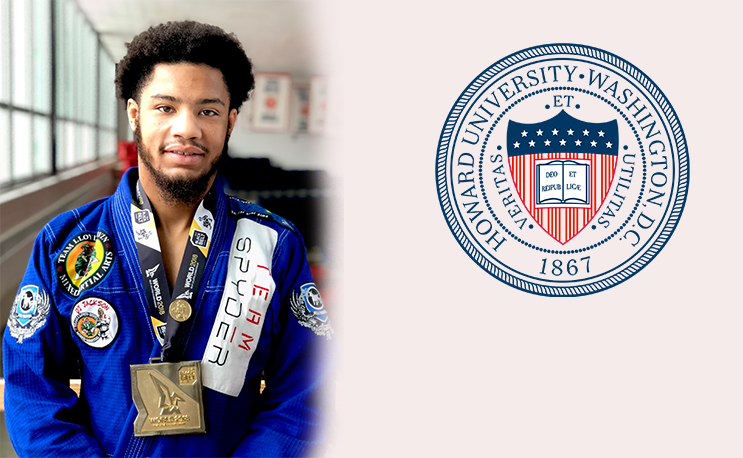 This Howard senior is already a history maker in the martial arts world.

WASHINGTON -Whether you believe that champions are born or that they are made, Shane Jamil Hill-Taylor is irrefutable proof that they cross paths with Howard University. The senior sports management major and jiu-jitsu athlete has recently crowned the 5th International Brazilian Jui-Jitsu Federation World Champion, making him the very first African-American to hold the title.

On Monday, June 4, Hill-Taylor locked his opponent, former IBJJF World Champion Leonardo Saggioro into a position he couldn’t escape, causing Hill-Taylor’s coach, 4thdegree black belt Lloyd Irvin, to jump from his seat, bursting with excitement. He knew that what they had been training for had been accomplished, even before the announcer proclaimed Hill-Taylor the new world champion at the International Brazilian Jiu-Jitsu Federation (IBJJF) World Championship.

“To be the 2018 Brazil Jiu-Jitsu Champion at the Black Belt level and to be the first African-American to achieve that title is pretty crazy honestly, I have been working for this for 14 years; it’s the reflection of a lot of hard work and a lot of struggles,” says Hill-Taylor

The 20-year-oldwill enter his last semester at Howard University when the 2018-19 school year begins, graduating in December 2018. Upon graduation, he plans to travel more to compete in order to perfect his sport and he plans to use his degree to increase the presence of Jiu-Jitsu in his community.

“When I’m in school I still train the same amount of days, but I can’t always do two a-days if I have a lot of homework or studying to do,” says Hill-Taylor in a recent Jiu-Jitsu Times interview.

At 154 pounds, Hill-Taylor is the “Featherweight King,” in the words of several sportscasters. He is no stranger to breaking records either – he has nine other “champion” titles amongst a host of other medals and highly-esteemed achievements. Not to mention being a full-time student held accountable for performing equally as well in the classroom.

His life motto is “Hard work will always beat talent when talent refuses to work hard,” and the Howard community believes he has both. The SPYDER-sponsored athlete now focuses his training efforts to compete in the SPYDER Brazilian Jiu-Jitsu Championship quarterfinals in Korea on July 21.