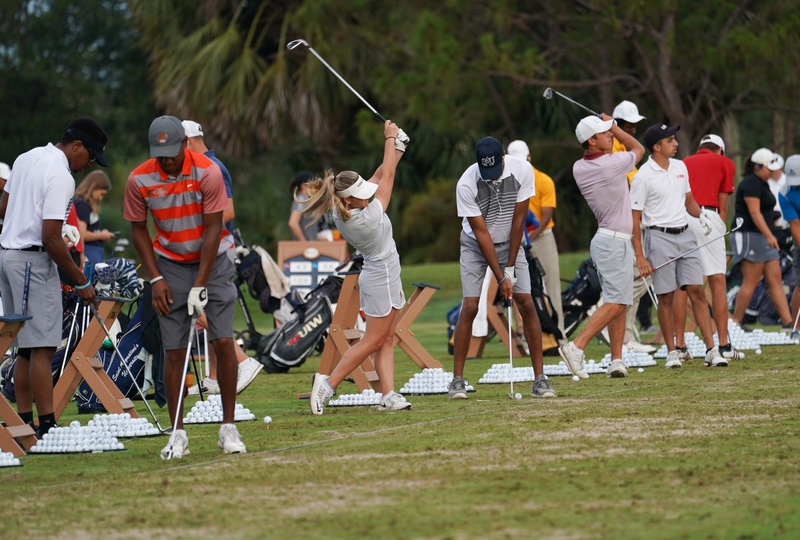 The Wildcats put the growl on the rest of the field.

PORT ST. LUCIE, Fla. –– For Bethune-Cookman University, it was yet another impressive example of a dynasty in cruise control at the 32nd PGA Minority Collegiate Championship at PGA Golf Club.

The teams from Daytona Beach rocketed right out of the gate and never let off the throttle throughout the 54 holes of competition. Paced by medalist Mackenzie Butzer who had a final round 1-under par 71 (70-75-71 216), the Bethune-Cookman Women (297-307-299 903) defeated runner-up University of the Incarnate Word by 27 strokes on the Ryder Course. North Carolina A&T finished third, another seven strokes back.

PORT ST. LUCIE, FL – MAY 12: Isabela Miravite of Bethune Cookman University chips on the ninth hole of the Ryder course during Round Two for the 32nd PGA Minority Collegiate Championship at PGA Golf Club on May 12, 2018 in Port St. Lucie, Florida. (Photo by Traci Edwards/PGA of America)

“This is overwhelming,” said Butzer. “This is my last year, and I gave it all I had. I had fun and played easy. Everything seemed to be clicking.”

Meanwhile, the Bethune-Cookman men (286-282-286 854) shot 10-under par for the Championship, winning by an amazing 57 strokes over Savannah State on the Wanamaker Course. The University of Incarnate Word placed third.

For Bethune-Cookman, it was a three-day showcase of utmost command. After closing out the Championship on No. 18, the women’s team sprayed the men’s team with a water bottle shower that would have rivaled a dramatic victory celebration.

“It was so fun to see our student-athletes end the season like this,” said Bethune-Cookman Head Coach Danny Forshey.

The Bethune Cookman Men were led by medalist Marcus Sundlof, of Sweden (65-70-71 206), who bested his teammate Christian Hovstadius for the honor by seven strokes.

“It feels great,” said Sundlof, a sophomore who overcame a wrist injury at the beginning of the year. “We had a lot of team wins, but I wasn’t playing well personally. It’s great to finish off the year this way.”

In a weather-related quirk designed to get ahead of the heavy rains forecasted to arrive from Mother Nature on Mother’s Day, the final round actually began on Saturday, as the teams played 27 holes overall, including the first nine holes of the Championship’s final stanza. The final nine holes were completed on Sunday morning in slightly rainy and muggy conditions.