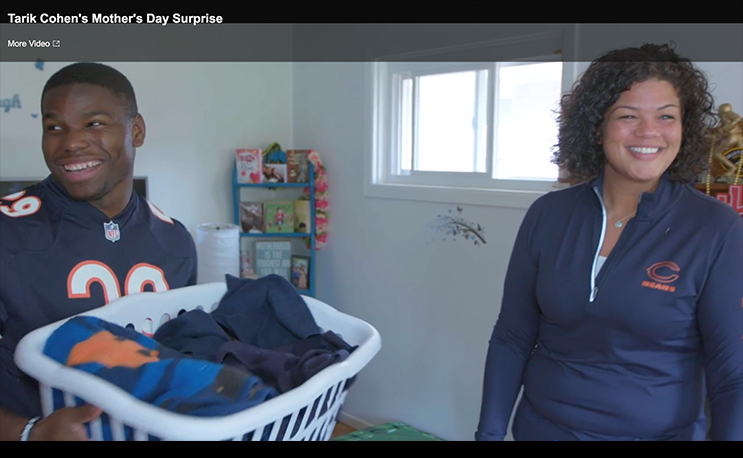 Mothers Day is always a special day filled with appreciation for the women who brought us into the world. This mother’s day, the Chicago Bears and Tarik Cohen partnered with Tide to give mothers the “cleanest” Mothers Day gift ever.

The video continues as a surprised mother opens her front door to see Tarik holding a laundry basket filled with gifts including a Chicago Bears hat, a Tarik Cohen jersey, some Tide products and a dozen roses. “Oh my God! This is the coolest thing ever, thank you!” says the unsuspecting mother.

Not only does Tarik stop by to drop off the goodie basket, he then proceeds to do a load of her laundry, giving the mother some much needed time with her kids. “My mom gets on me about doing my own laundry, and now I’m here doing someone else’s” jokes Cohen as he drops a couple Tide pods in the washer.

He visits another mother, and not only does he help her with a load of laundry, he even takes time to play a game of catch in the yard with her kids.

Tarik Cohen finished his rookie season in Chicago as the NFC North Offensive player of the year and established a reputation as one of the most exciting Bears in Chicago on and off the field. Which if you’ve been following us at HBCU Gameday is no surprise because in his fours years as a Running Back for North Carolina A&T he excited fans on the field and stole pieces of their hearts off of the gridiron with his magnetic personality, as we saw in our 4 part docu-series Beyond the yard: In Depth with Tarik Cohen.

Take a look at the video below and for all the mothers all across land, Happy Mothers Day from the HBCU Gameday team!