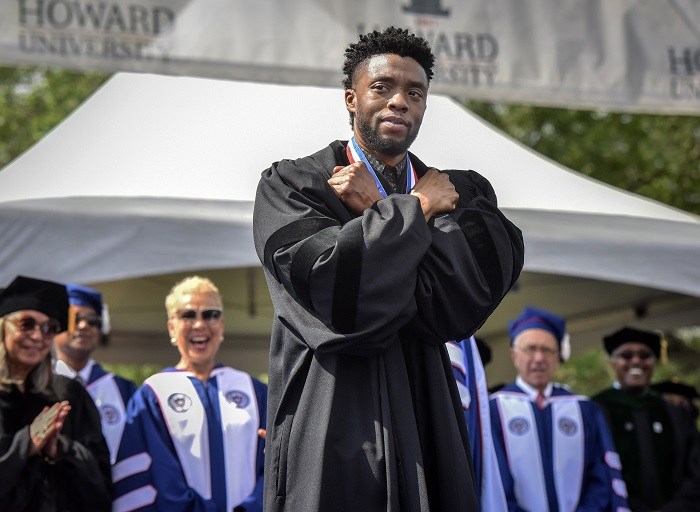 The Black Panther takes over DC

WASHINGTON, D.C. (May 12, 2018) – Howard University alumnus and award-winning actor Chadwick Boseman spoke to graduates about the significance of making it to the top of the Hilltop during the Howard University 2018 Commencement Convocation.  In front of an audience of more than 8,000 family and friends, Boseman encouraged the graduates to not only exceed in their next steps, but also strive to achieve their life’s purpose.

“When you have reached the Hilltop and you are deciding on next steps, you would rather find purpose than a career. Purpose is an essential element of you that crosses disciplines,” said Boseman.

He applauded the members of the class of 2018 for climbing up their academic slopes and making it up the Hilltop.

“The Hilltop represents the culmination of the intellectual and spiritual journey you have undergone while you were here,” said Boseman. “Each of you have had your own difficulties with The Hill, but it’s okay because you made it on top. Sometimes, you need to feel the pain and sting of defeat to activate the real passion and purpose that God predestined inside of you.”

Boseman also declared Alma Mater, “a magical place — where the dynamics of positive and negative seems to exist in extremes.” He referenced an inspirational moment he experienced when meeting the iconic Muhammad Ali on the University yard; highlighting how at Howard, magical moments can happen to give students powerful encouragement on their toughest days.

“I remember walking across this yard, when Muhammad Ali was walking towards me with his hands raised in a quintessential guard. I was game to play along with him,” said Boseman. “What an honor to be challenged by the G.O.A.T. I walked away floating like a butterfly…walked away light and ready to take on the world. That is the magic of this place. Almost anything can happen here.”

A native of South Carolina, Boseman graduated from Howard University and attended the British American Dramatic Academy at Oxford University. Thereafter, Boseman began his career as an actor, director and writer. He starred as T’Challa/Black Panther in the worldwide phenomena Marvel Studios’ “Black Panther” and “Avengers: Infinity War.”

Boseman’s breakout performance came in 2013 when he received rave reviews for his portrayal of the legend Jackie Robinson in Warner Bros’ “42.” He previously starred in the title role of Open Road Films’ “Marshall” alongside Josh Gad. The film tells the story of Thurgood Marshall, the first African-American Supreme Court Justice, who graduated as valedictorian from Howard University School of Law in 1933.

This year’s Commencement Convocation marks the commemoration of Howard University’s 150th graduating class. Howard University President Dr. Wayne A. I. Frederick said the University’s establishment represents one of the most noteworthy accomplishments in the history of American colleges and universities.

To the Class of 2018, Dr. Frederick encouraged the graduates to be bold as they embark into their chosen careers.

“Don’t stand safely on the sidelines; take risks, learn how to be wrong. It is the best way to learn and grow,” said Dr. Frederick. “Build a culture of generous listening so that others may be emboldened to take risks, too.”

Howard University is awarding 2,217 degrees, including 343 master’s degrees, and 90 Ph.Ds. More than 382 students received professional degrees in law, medicine, pharmacy and dentistry. Howard University has the only dental and pharmacy colleges in the District of Columbia. The 2018 graduates represent 39 states and 32 countries; 117 graduates are from the District of Columbia.