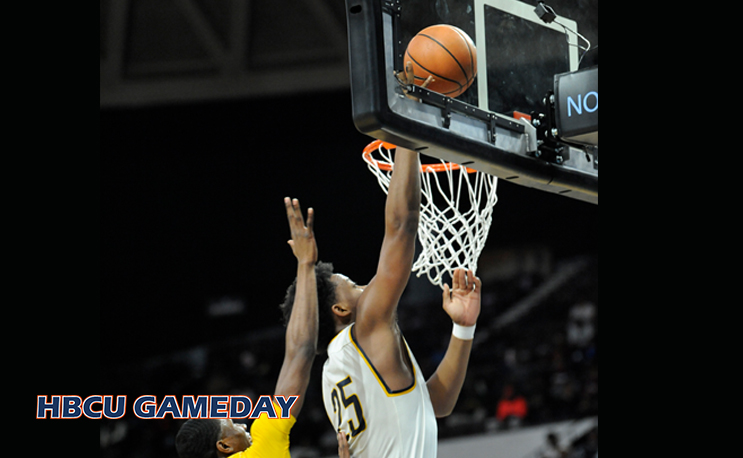 North Carolina A&T could lose its top scorer to transfer this offseason.

A few weeks after completing its best season in recent memory, North Carolina A&T may be losing its leading scorer.

A&T forward Femi Olujobi announced via Twitter that he has been granted his release and will be weighing his options whether to return or transfer elsewhere. Olujobi will be eligible to play at A&T or with another team as a graduate transfer.

“I would like to use this time to evaluate everything with my family and loved ones to ensure I make the right decision as to where I spend my graduate year and compete,” Olujobi wrote on Twitter.

He told the Greensboro News and Record on Saturday that 50 schools are interested in him as a graduate transfer once he completes his undergraduate studies at A&T.

“I feel like I’m coming out of high school all over again,” he told the paper. “It’s been a roller coaster these past few days, I can’t even put my phone down … it’s fun — and stressful — but it just goes to show what putting in the work can do for you.”

Olujobi averaged 16.3 points and 7.7 rebounds per game in his first season in Greensboro after sitting out the previous year. At one point he was the leading scorer in the NCAA. The Aggies finished 20-15 in 2017-18, their best record since the 1990s.

If he does elect to move, it would be the second year in a row that A&T lost its leading scorer to graduate transfer. Sam Hunt transferred to NC State following the 2016-17 season. A few years before that, Richaud Pack became a starter for Maryland after spending two seasons at A&T.

Of course, Olujobi could return to A&T next year, something he made clear in his post.

“This message is not to say I will not be returning next year, rather just weighing out all of my options before making my final decision,” he wrote. “I love you all and thank you once again for the hospitality and unforgettable season. #AlwaysAnAggie.

Olujubi’s potential transfer doesn’t come as a complete surprise, as many people around the program suspected that he would test the transfer waters with another year of eligibility. A&T will already have to replace big men DeVaris McGowans and Denzel Keyes, making his decision that much more significant as A&T tries to build off the past season’s performance.

Ultimately, Olujobi is looking at a number of factors, primarily a shot to play in the spotlight and play in the big dance.

“Partially, I want to play on a higher level … a lot of it goes into setting myself up to being in the right position,” he said. “I want to go to the (NCAA) Tournament — not to say that it can’t be done here at A&T … the other part of it is trying to make sure I utilize my time the right way.”