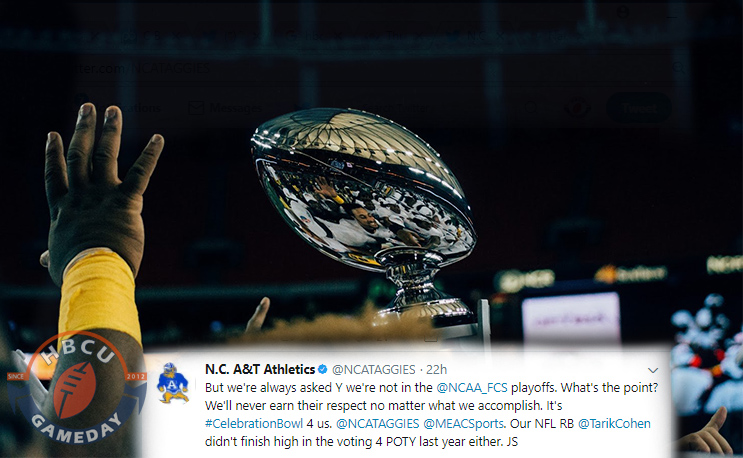 North Carolina A&T doesn’t think it will ever earn respect from the FCS community, so the Celebration Bowl is where its at.

For the second time in the game’s three-year history, North Carolina A&T is in the Celebration Bowl. And there is nowhere else the Aggies would rather be.

If there was any doubt as to why that is, a set of tweets from the A&T athletic department’s official Twitter handle on Wednesday evening should have laid them to rest.

STATS FCS, a company that covers FCS sports, announced their coach of the year award on Wednesday. The winner of the award, named after legendary Grambling coach Eddie Robinson, was Austin Peay’s Will Healy. A&T coach Rod Broadway finished fifth in the voting despite leading his team to a perfect regular season and a berth in the Celebration Bowl.

A few hours later, A&T issued a tweet pointing out that Healy’s team didn’t even make the playoffs, while Broadway led a team with lower resources to an unblemished record. It also acknowledged that his counterpart, Grambling’s Broderick Fobbs, got even less recognition.

A coach whose team didn’t make the playoffs wins @FCS_STATS national coach of the year. Rod Broadway’s team has a chance to go 12-0 @ a lower resource school @ncatsuaggies and he finishes 5th in the voting. @GramblingFB coach Fobbs is no where 2 be found in the polling. Amazing

That tweet was followed by another one stating that it will “never earn their respect” no matter what it accomplishes, and doubling-down on what it has been proclaiming all season: Celebration Bowl is the goal.

But we’re always asked Y we’re not in the @NCAA_FCS playoffs. What’s the point? We’ll never earn their respect no matter what we accomplish. It’s #CelebrationBowl 4 us. @NCATAGGIES @MEACSports. Our NFL RB @TarikCohen didn’t finish high in the voting 4 POTY last year either. JS

Since the MEAC relinquished its automatic bid to the FCS playoffs to send its champion to the Celebration Bowl, there has been a debate as to whether or not that was the right move. The debate ended for many people a while back, but for some it continues to this day.

A&T has been transparent in saying that getting to the Celebration Bowl was its priority, and given its recent history, that says a lot.

Winners of the inaugural game in 2015, A&T didn’t make the game last year, but did earn a playoff berth on the strength of its 9-2 record. It went on to take a blowout loss to Richmond the first round, and by the time December rolled around its season was over.

As its season unfolded and it became clear that A&T was postseason bound, it has steadfastly held on to its preference for the bowl game. Never was it clearer than after it’s final regular season game against rival North Carolina Central.

As the final seconds clicked off the clock on that clear, cool and crisp November day, I could hear the folks surrounding me on the sidelines pulsate with excitement.

“Back to the bowl game,” another chimed in.

Moments later, running back Marquel Cartwright clutched the plaque commemorating his team’s invitation to the bowl game as tight as he had the ball. The MEAC’s leading rusher knew he was carrying precious cargo.

Broadway didn’t blink an eye when asked if he’d rather be leading his team to the FCS playoffs of the Celebration Bowl.

“Now if you take a poll from our guys that played in both (Celebration Bowl and playoffs), I bet you a 100 percent would select to go back to the Celebration Bowl,” Broadway told reporters after the game. “Now as a competitor, I think we could get in that thing and make a little bit of noise. But that’s not our path.”

And the players echoed their coach’s sentiment with their words and actions. When asked the same question by reporters, they couldn’t hide their excitement. Especially offensive tackle Brandon Parker, who was named to the AP All-America Team earlier this week.”

“It’s nice you get down there Wednesday, you may have practice Thursday but other than that you go to go to museums,” Parker said. “You have little programs, banquets here and there, they feed you good, so it’s a good time for everybody.”