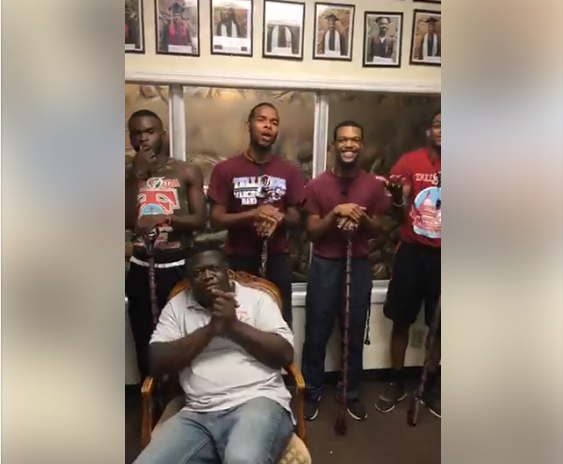 Talladega and its band director release manifesto against Southern, Jackson State and Alcorn ahead of band battle.

There are several band battles going down this week outside of football games, but Crankfest in New Orleans has folks making band diss videos.

Talladega College Marching Tornados will be the only non-SWAC band of the event, which is set for Sunday, and they are coming out swinging as they released a video on their Facebook page letting folks know they are not for play.

Looking at the event’s EventBrite its pretty clear why Talladega is angry as its school name is spelled wrong, but we digress.

Band director Miguel  Bonds did most of the talking, while his seven drum majors stood in the background for the most part. (No literally, the first 2:15 of the video is of them standing. Just skip it)

Once Bonds appeared, he started the verbal sprays, claiming that everyone that “blows” at Talladega’s band director retires.

Southern’s Human Jukebox got most of the attention, as even the drum majors joined end in a verbal roast of SU’s solo drum major.

“What do you do?” a particularly animated drum major exclaimed. “You bout as useless as the WNBA.”
[postBannerAd]
Southern, of course, is famous for its cinematic band videos under the direction of Garrett Edgerson. Bonds has seen the footage, obviously.

“You done made all these movies. I pull my popcorn out,” Bonds said. “I’m like dude, what is going on? You from Hollywood or something?

“How many songs they say we playing? Seven? Bonds asked? “I play how many I want.”

Then again, if you went to the Queen City Battle of The Bands in Charlotte last month, you realize that might not be an idle threat as ‘Dega did play over the public address announcers pleas for them to stop a time or two.

We’re in Week Five of the college football season, but obviously, band season is already hitting its stride.