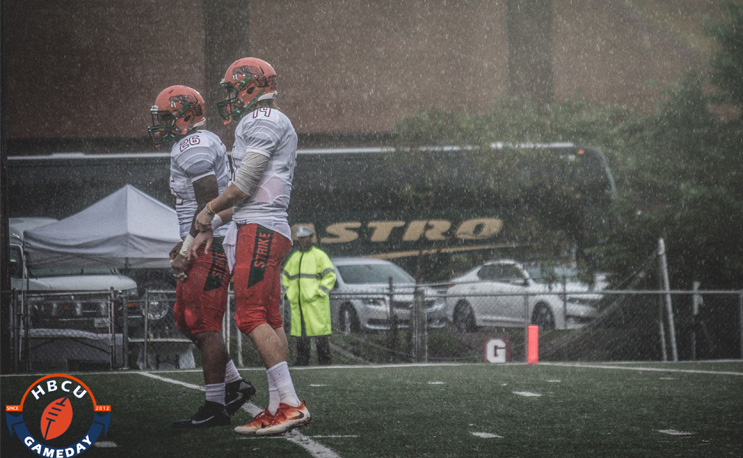 Jay Bilas hush that fuss, FAMU counting cash to the back of the bus.

Florida A&M made headlines over the weekend as its upcoming 10-hour, one-way bus ride for a money game versus Arkansas became the subject of a national debate about schools using players to fund their athletic programs.

Tallahasse.com’s Jordan Culver wrote a story earlier in the week about the upcoming bus ride for the team’s game against the SEC program on Aug. 31. FAMU players will get on the bus on Wednesday for the Thursday night game, which is worth about $750k to the program, according to the report.

The story found its way to ESPN’s Jay Bilas, a television broadcaster who is engaged in a never-ending war with the NCAA. Bilas took to twitter and it was on.

FAMU associate AD Chris Asa defended the program’s decision to get on the bus, one the school owns that was just brought back from the shop with repairs.

I’m sorry we aren’t a $100 million budget school. If Bama was taking this bus ride you might have a point.

“I’m sorry we aren’t a $100 million budget school. If Bama was taking this bus ride you might have a point,” Asa tweeted. “But we ain’t Bama. We ain’t FSU. So try not to use us to drive your narrative.”

Asa also revealed that the administration will be traveling with the team via bus, not flying while the student-athletes are burning up the road.

So did Bilas have a point? There is definitely a case to be made that he does. Not only will FAMU be up against a program that dwarfs its scholarship numbers (FCS max is 63 scholarships, FBS is 85) it will also have to spend a significant amount of time the day before the game to travel while Arkansas waits for them to get there.

But Asa’s point is valid as well. Though FAMU is a NCAA Division I institution just like Alabama is, they are worlds away in terms of athletic department revenue generation. FAMU isn’t just riding the bus to be cheap. They are doing it to survive as an HBCU in the FCS, and they are not alone.

Long bus trips are a part of the culture at FAMU, who often has bus rides that length or longer in the wide-reaching MEAC, which runs all the way into Delaware.

And let’s be honest: this is a game FAMU isn’t planning on winning.

FAMU SID Vaughn Wilson told Tallahasse.com the plan is to use the money generated from this game to fly to conference games as they have to travel to both MEAC Virginia schools (Hampton and Norfolk State) and Morgan State in Baltimore.

“It comes down to finances,” Wilson said. “Just trying to be responsible with the money we have and taking a look at things. It’s a stretch, it’s not something we want to do, but it’s something we have to do financially for that game.

It’s clear that FAMU is banking on this game to help its program compete with ones it feels like it can compete against, like pretty much every FCS and non-Power Five school does. Hopefully this will result in a better showing than FAMU’s recent efforts vs. FBS schools (who can forget the 76-0 loss to Ohio State), but the main thing is keeping its head above water and hopefully making a wave when it can.

Bilas’ beef with the NCAA is a legit one, but as a practicing lawyer, he should know this argument for it is extremely flawed.