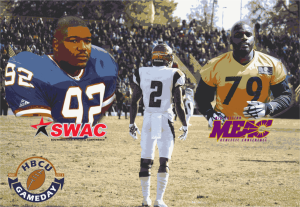 The MEAC accounts for 19 of the HBCU products in the NFL, according to The Black College Sports Page. Twenty if you count Winston-Salem State’s William Hayes, who played in both the MEAC and the CIAA as the program attempted to move from Division I to Division II.

That represents a consistent changing of the guard from the past, where as recently as 1994 the SWAC was the clear leader in HBCU to NFL products. The SWAC is now producing just a third of the amount of players the MEAC is.

“I guess we’ve got better players in the MEAC right now,” SC State coach Buddy Pough said via The Undefeated. “As I see teams, I see programs and facilities, I see teams over on that side [SWAC] that have the potential to have good players just as we have. I just think maybe they haven’t had the success that we’ve had. We’ve had a little of an edge that way.”

How did we get here? There are a couple of changes that explain how the MEAC became the biggest exporter of HBCU talent in the NFL.

The SWAC is loaded in the football-rich Deep South, the biggest football hotbed in America. While that location was once the source of its rich pro pipeline history, it now presents a problem. When recruiting was less extensive, the SWAC was able to occasionally land big-time talent that managed to go undiscovered by bigger schools. Players like Jerry Rice, Michael Strahan, etc. flew under the radar of scouts in a way that is nearly impossible today.

The MEAC, located primarily in the Carolinas, Virginia and the DMV, plays in an area where there is less elite talent, but plentiful mid-level talent that sometimes goes unnoticed. North Carolina Central’s Ryan Smith was a basketball player in Upper Marlboro, MD that came to school on a partial scholarship. Javon Hargrave landed at South Carolina State out of the football hotbed of Salisbury, North Carolina.

Redskins executive Doug Williams, who played and coached in the SWAC, credits less film on the conference’s players as reasons for the decline in its NFL numbers.

“I think the SWAC does not do what they should do in as far as sending video into the league so everybody can view it,” Williams said. “It’s awfully tough when people tell you about a player and you don’t have anything to go on.”

Perhaps even bigger than location or film, however, is the role of conference expansion.

The MEAC has added four football schools since 1994, while Arkansas-Pine Bluff and Alabama A&M are the only SWAC schools added since then. Hampton, Norfolk State and North Carolina Central were all in Division II as members of the CIAA when the BCSP began to tally HBCU talent in the NFL. Those three schools combine for eight players on NFL rosters heading into the league’s opening weekend. Take them away, and the numbers are about the same.
All of those factors have contributed to the changing of the guard in the NFL pecking order when it comes to HBCU players. But the bottom line is that HBCU numbers are down overall, and that is a trend that doesn’t seem to be changing any time soon.