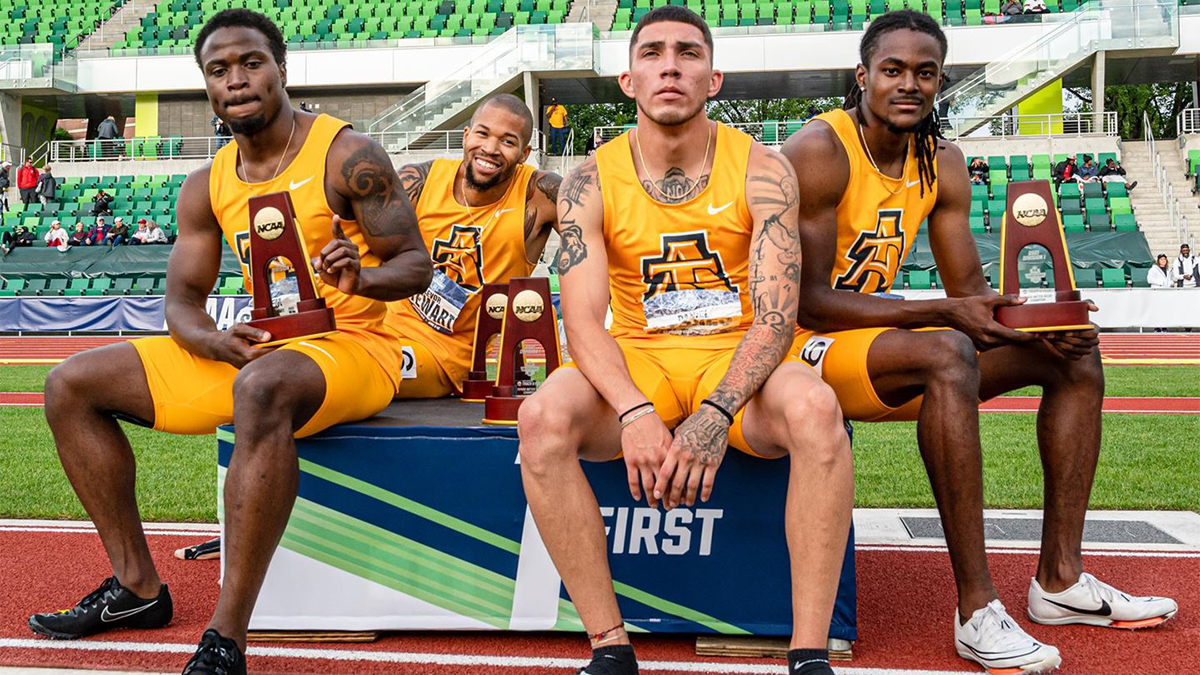 NC A&T track program believes it has something to prove

“We can still make some noise on the national level. We’re still good. The goal is to win the Colonial. Second place would be a disappointment.” – Allen Johnson, North Carolina A&T track coach

EAST GREENSBORO – Reading glasses are not required to see it. It is easily recognizable and resides on the shoulder of many of the returning men’s and women’s athletes from the NC A&T track and field team.

It is a huge chip. They have seen the comments on social media. They have heard the whispers and, quite frankly, the screams of A&T track and field’s time in the national spotlight is over!

Duane Ross announced his intentions to become the director of track and field at the University of Tennessee before the Aggies competed in the 2022 NCAA Outdoor Track and Field Championships in Eugene, Ore., in June. Olympians, national champions, and some first-team All-Americans followed him to UT.

North Carolina State assistant coach and three-time Olympic Gold medalist Allen Johnson stepped in to replace Ross as the director of track and field at A&T in June. It is his first head coaching experience, so he has experienced the transfer portal for the first time as a head coach.

Johnson has experienced the return of students for the fall, the exam period, having them leave for the holiday and then return from the holiday in time to get ready for the indoor track and field team’s season debut at the HBCU Showcase Challenge in New York on Saturday, Jan. 14 at the Armory’s New Balance Track & Field Center.

“I didn’t know what to expect,” said Johnson. “With this being my first head coaching experience, I want to leave that open. I knew I wanted order. I wanted discipline. I wanted hard work. I wanted all the cliché things that everybody says. But everything is still developing because everything is brand new, and I’m still learning.”

One of the things he has come to learn is that the NC A&T and field programs’ talent is not depleted. Instead, the Aggies have enough talent returning, where both the men and the women are the likely favorites at the 2023 Colonial Athletic Association (CAA) indoor track and field championships, Feb. 22-23 at Virginia Beach, Va.

We lost a lot of talent. We lost people you don’t easily replace like an Olympian, like a national champion,” said Johnson. “But we can still make some noise on the national level. We’re still good. The goal is to win the Colonial. Second place would be a disappointment.

The attitude is this: What happened in the past was awesome. We were a part of it. But as it would be if everything stayed the same, this is a new year. So we’re attacking this like a new year, and we will go out here and show everybody who A&T is. Let me tell you something. That’s coming from the athletes. The leaders have taken charge of the team to ensure everything is on track. We will get this work in and be ready to kick some tail.”

“Our leadership team has been great in bringing along our young athletes. They want to prove who A&T is,” said Johnson. “They want to show. I want to show we will be just as good as years past. Not just now, but in the long term.”

Like in many years past, the heart and soul of NC A&T track and field are the sprinters. They even earned the nickname Sprinter U. But Johnson wants to expand beyond that.

“It’s still the strongest point of our program because that’s where our numbers are,” said Johnson. “But we do have some good throwers. We do have middle distance, especially on the women’s side. Sprinting will be the core of the program, but my goal is to allow that to attract people who specialize in other areas to want to be a part of an overall successful program.

NC A&T track program believes it has something to prove