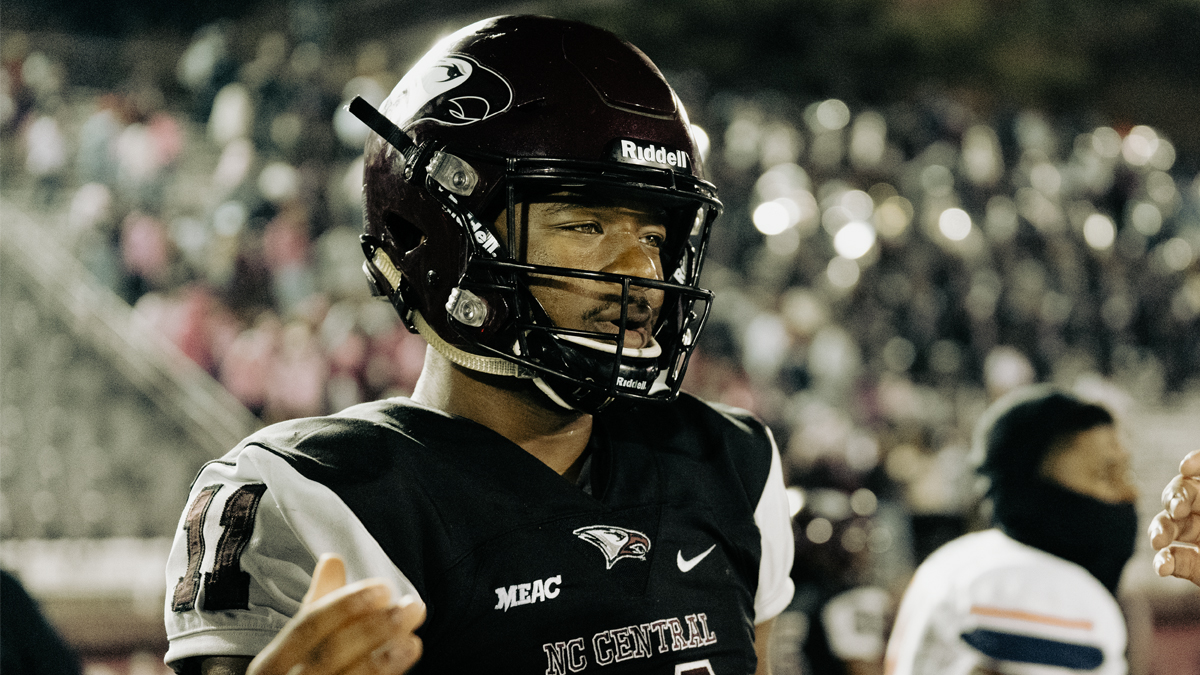 The MEAC has named North Carolina Central players to both its most prestigious football honors.

The MEAC’s top football honors were bestowed upon the two Eagles during the 64th annual National Football Foundation (NFF) & College Football Hall of Fame Press Conference, which was aired live on ESPN3.

MEAC Commissioner Sonja Stills made the announcement with both players in attendance.

This season marks the first time since 2005 that the MEAC’s Offensive and Defensive Players of the Year have come from the same institution.

“Congratulations to both Davius and Khalil on being named our Offensive and Defensive Players of the Year,” MEAC Commissioner Sonja Stills said. “They have earned every accolade they receive through their success on the field and they are fine representatives of both North Carolina Central University and the MEAC. I’m proud to honor them as the first Players of the Year during my tenure as commissioner.”’

Richard (QB, Jr., 6-3, 215, Belle Glade, Fla.) helped the Eagles win nine games in 2022 and claim their first MEAC football championship – and berth to the Cricket Celebration Bowl – since 2016. He currently ranks fifth in all of NCAA FCS in points responsible for with 20.4 points per game, and he is 12th in total offense, accounting for 288.8 yards per game. The seven-time MEAC Offensive Player of the Week also leads the conference in passing yards (2,486), passing touchdowns (24) and rushing touchdowns (13). With Richard at quarterback, the Eagles averaged a MEAC-best 38.4 points per game this season and scored 40 points or more in a game six times (including three 50-point efforts).

Richard is also a finalist for the Stats Perform Walter Peyton Award, given annually to the best offensive player at the FCS level. The award is known in some circles as the “Heisman of FCS.”

Baker (DB, Jr., 6-0, 185, Winston-Salem, N.C.) was second in the conference with four interceptions, including a touchdown return in a road win over nationally-ranked New Hampshire in September. A leader of the MEAC co-champion Eagles, he ranks third on the team with 51 tackles (38 solo), including 2.0 stops for a loss, while also recording five pass break-ups and recovering a fumble during his junior campaign. Baker is also fifth in the MEAC in passes defended with nine.

Baker is a finalist for the Buck Buchanan Award, given to the best defensive player in FCS.