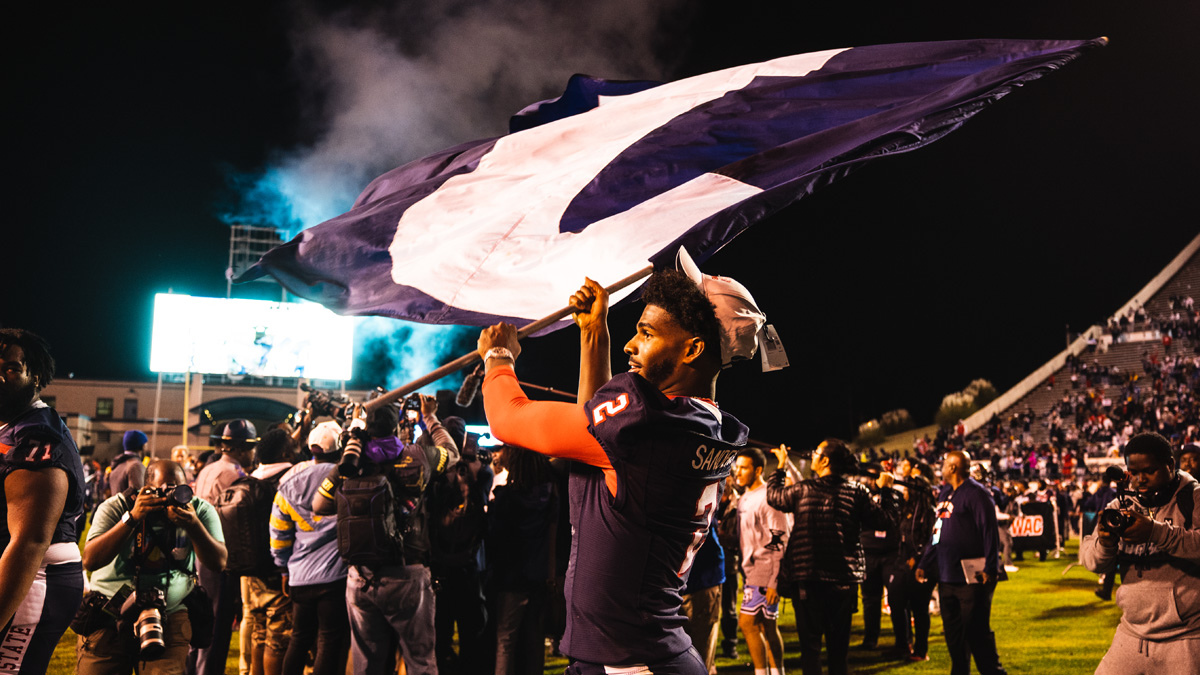 Deion Sanders led Jackson State to its second-consecutive SWAC title with his QB son Shedeur (above) pacing the win. But Coach Prime didn’t stick around for the press conference.

It was a game that many thought would be Deion Sanders and his son’s final game leading JSU. And in typical Deion Sanders style, he left the public wanting.

Speculation had swirled all week after it was reported Sanders had offers to become head coach at Colorado, Central Florida and Cincinnati. While media throngs packed into the tiny interview room in the bowels of Mississippi’s Veteran Memorial Stadium anticipating an announcement that Sanders was taking the job at Colorado, neither he nor his team showed up for the postgame press conference.

Rather, conference and game officials announced that Sanders and his team had returned to the JSU campus for a team meeting.

While the lack of clarity about Sanders’ status was disappointing, the championship game was not.

Southern (7-5), in fact, outscored Jackson 24-17 over the final three quarters after the disappointing start. But it could never overcome three first-quarter turnovers that all but doomed their efforts.

JSU sophomore quarterback Shedeur Sanders completed 31 of 44 passes for 305 yards and four touchdowns without an interception. Shedeur ran the Tigers’ hurry-up offense to perfection. He was named the game’s offensive MVP.

While he made no mistakes, his counterparts for Southern, starting quarterback Besean McCray and back-up Harold Blood, made several that put the Jaguars in a hole.

How the game unfolded

After surrendering a 22-yard field goal in JSU’s first possession, McCray was picked off by Southern safety Herman Smith III at the Southern 38 who returned it to the SU 1. Two plays later, JSU running back Sy’Veon Wilkerson took it in to put the Tigers up 10-0 with 8:26 left in the period.

On the ensuing Southern possession, Blood took over. On 1st-and-10 from the Southern 25, he was sacked and stripped by JSU linebacker Aubrey Miller Jr. with teammate Antonio Doyle Jr. recovering at the 14. Sanders hit wide receiver Shane Hooks on the first play for a score. The Tigers went for two and converted. Southern was down 18-0 with less than seven minutes gone in the quarter.

McCray came back in and led Southern into JSU territory for the first time. But on 2nd-and-10 from the SU 36, McCray was stripped by Baron Hopson with defensive end Justin Ragin recovering at the JSU 30. Four plays later, Sanders hit Hooks on the left sideline who broke a tackle to score from 40 yards out. JSU again went for two again and converted. The Tigers led 26-0 with 3:38 left in the period.

McDaniel gets the Jaguars going

Southern head coach Eric Dooley then turned to third-string quarterback, grad senior Glendon McDaniel. He led the Jags on an 82-yard drive in 12 plays to get them on the board. His 4-yard scoring run came on the first play of the second quarter.

Sanders came right back to drive JSU 85 yards in seven plays for a score. He connected with freshman Kevin Coleman Jr. for the 14-yard TD. The play was reviewed but was confirmed. Mata’s PAT gave JSU a 33-7 lead with 11:25 left in the second quarter.

Southern did not give up the fight. Getting the ball with :48 seconds to go in the half, McDaniel drove the Jags 42 yards in five plays. The score came on a 39-yard Joshua Griffin field goal at the halftime buzzer. It sent the Jags into the break trailing 33-10.

Too little, too late

McDaniel’s play would make the game respectable as he accounted for all of the Southern points. He passed for a 34-yard TD to Chandler Whitfield early in the third quarter to pull the Jags within 33-17. With his team down 36-17, he scored on a 42-yard quarterback draw play that got SU within 36-24, their final points of the game.

McDaniel finished the game with over 350 yards of total offense. He completed 15 of 34 for 200 passing yards and one TD with two picks. He also topped the JSU rushers with 162 yards in 20 carries and two scores.

Jackson State, whose defense came into the game surrendering an FCS-best 10 points and 210 yards per game, gave up 412 yards to the Jaguars. Linebacker Aubrey Miller Jr. was named the game’s defensive MVP. He had four other tackles to go along with his strip sack.

The championship game attendance was 53,754.

Both bands, Southern’s Human Jukebox and Jackson State’s Sonic Boom of the South, were outstanding before, during, at halftime and after the game in the fifth quarter.