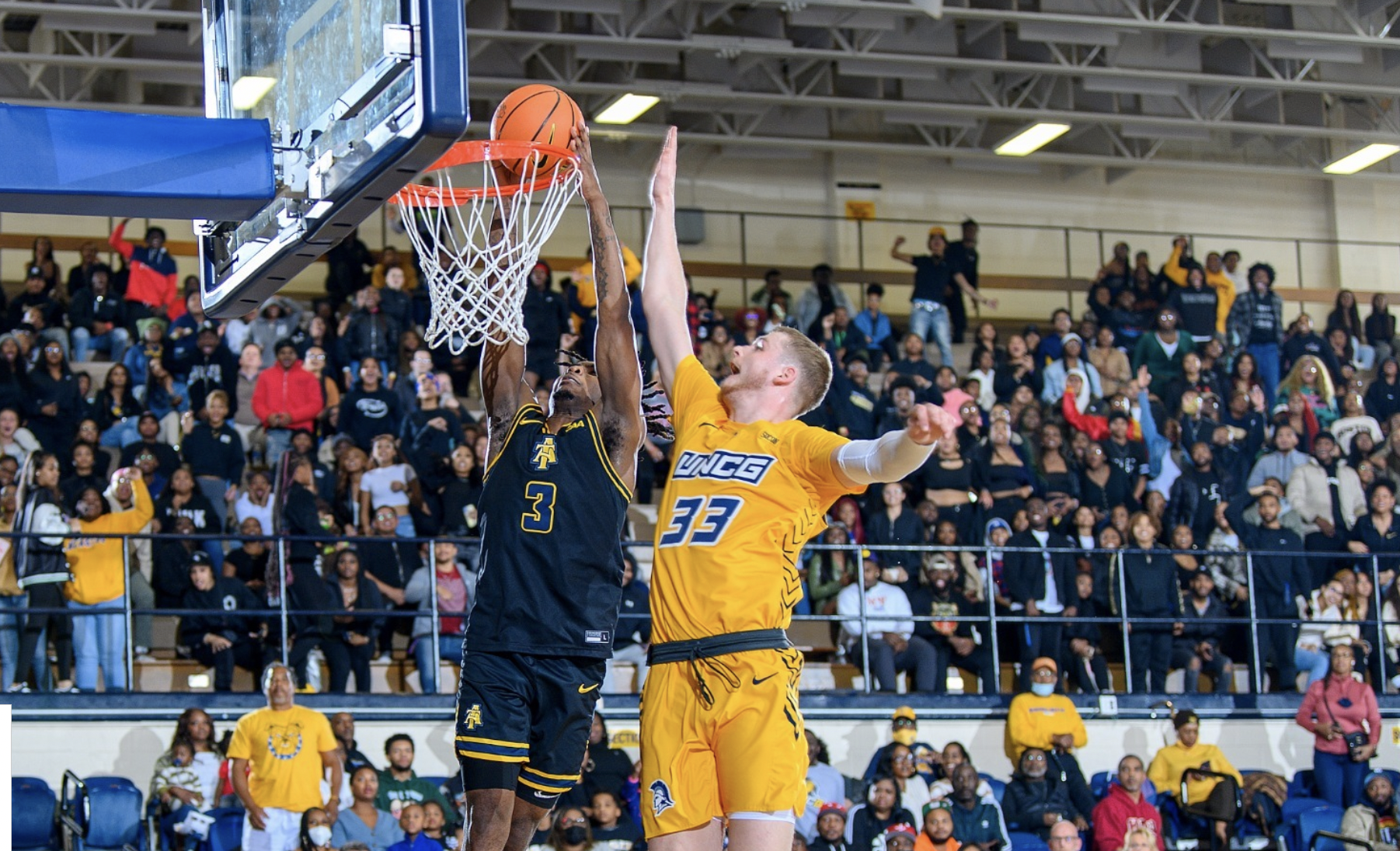 NC A&T gets a big win at home before a big home crowd before heading on the road for the next month. A backcourt gem fueled the win.

GREENSBORO, NC – NC A&T has some gems in its gym.

Sophomore point guard Kam Woods scored 18 of his game-high 23 points in the second half as the Aggies pulled away to a 73-56 win over crosstown rival UNC-Greensboro Wednesday evening before a raucous home crowd at Corbett Sports Center.

It was the first win for the Aggies (4-4) in five years vs. their down-the-street rival and the first Div. I win of the season for NC A&T and interim head coach Phillip Shumpert.

“I’m so proud of our guys for sticking to the game play, playing hard, and doing a good job of neutralizing the inside,” Shumpert said. “It’s a proud moment for me and my guys to come out and get this win for the Greensboro community after a five-year drought.”

Shumpert had been an assistant at A&T for four years and suffered through four straight losses to the Spartans (3-5) before being promoted to interim head coach this summer.

“The atmosphere was electric tonight,” Shumpert said. “I’m glad the fans came out and supported us.”

Redshirt junior forward Marcus Watson scored 12 of his 13 points in the first half and led the Aggies with nine rebounds. Senior guard Demetric Horton had eight of his 13 before the break.

“He’s instrumental in what we do,” Shumpert said of Woods. “We had a four-year starter and a record-breaker in (all-time A&T and MEAC assist leader) Kam Langley. For him (Woods) to come in, he had some big shoes to fill.

“He’s very important to us both on the offensive and defensive ends. He’s the head of the snake, He’s our point guard. Previously, against Greensboro College (a 78-51 win on Nov. 28), he might have had three points. That may have been an all-time career low in high school, middle school or in his career.

“He’s naturally a scorer but he’s learning to play, and run stuff and play in a team concept. So, it’s a work in progress. He’s continuing to grow, buy in and be the floor general that we need.”

“We’ve been preparing all week for this game,” said Woods, who transferred to A&T this season. “This game, it meant so much to our alumni, even to our coaches. One coach (assistant coach Sam Hunt) played in it, and they’d hadn’t won since he played in it. So we had to go out there and win.”

Woods is a 6-2 guard from Bessemer, Alabama who played at Pinson Valley High School. He was the two-time Alabama 6A State Player of the Year at PVHS in his two seasons there. He led the Indians to the 6A state title in 2019. He averaged 38.1 points per game, seventh in the nation, in his final season.

“I averaged 38 points and my highest was 52 points,” Wood said of his senior year. “I did that, like, five times.”

As a sophomore at Midfield High in Alabama, he was the 3A State Player of the Year while leading the school to the 3A state title.

Woods began his college career in the 2020-21 season at Troy before spending a season at Northwest Florida Junior College. He averaged 10.3 points for Troy and was selected to the all-Sun Belt Conference rookie team. At NWFJC, he led the Raiders to the 2022 JUCO national championship.

Shumpert, who coached high school basketball in Alabama and at at Lawson State Community College in Bessemer, has been watching Woods play since he was a youngster.

“We don’t come back (to Greensboro) until January,” Shumpert said of the Aggies schedule going forward. “Now that we’ve got the Div. I win, guys are getting more and more comfortable with each other as a team.

“We start with Houston (on Tuesday, Dec. 6), who’s number one in the country. According to KemPom (the Ken Pomeroy College Basketball Ratings at kennem.com), we have the 17th toughest strength of schedule in the country. ‘We’ve got (SWAC champion) Texas Southern, (MEAC champion) Norfolk State, UTEP, New Mexico State. So this should give our guys confidence to go out there and compete and go out there and try to get a win.”