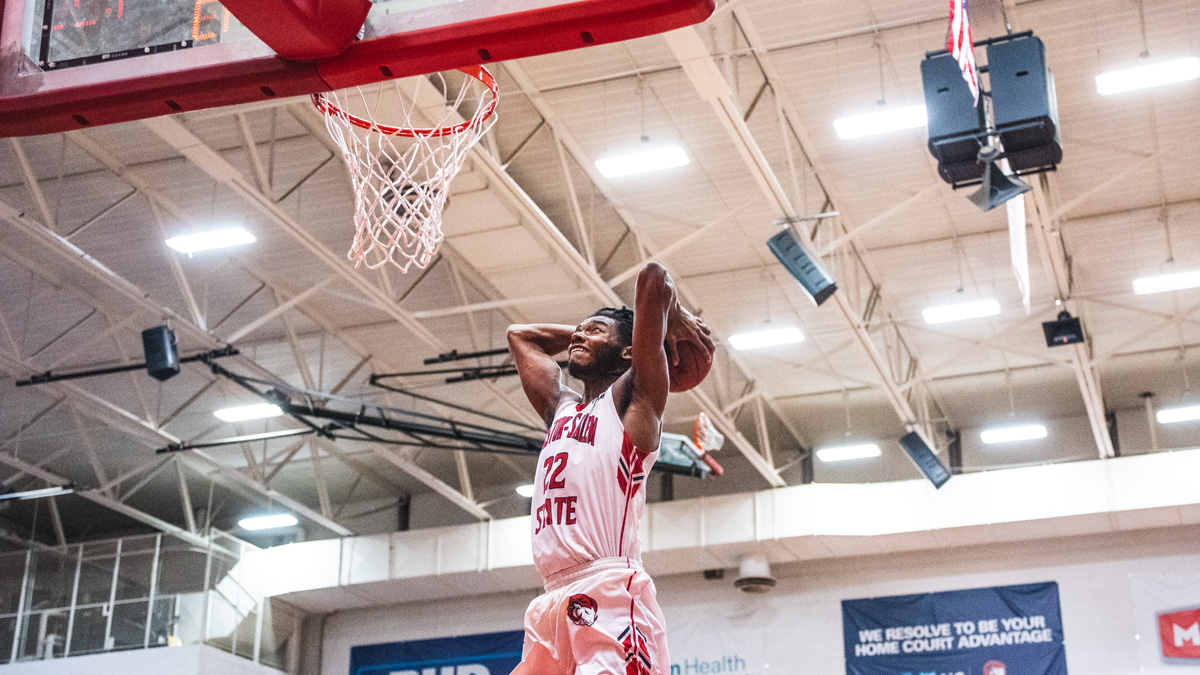 Winston-Salem State is deep, talented and putting its pieces together before CIAA play.

Winston-Salem State is off to a red-hot start to the 2022-23 season, and Wednesday night was a good example of why expectations are high at 601 S. Martin Luther King Jr.

WSSU made easy work of Johnson and Wales on Wednesday, winning 84-57 in front of a typically-exubrient home crowd. The win was the 17th in a row in the C.E. Gaines Center, dating back to January 2020.

Former NC State big man Jaylon Gibson led the way with 26 points on 9-for-16 shooting and grabbed 13 rebounds to go along with a pair of blocked shots. It is exactly the type of game WSSU head coach Cleo Hill Jr. envisioned when he reeled him in over the summer.

“We told him his role will be totally different,” Hill said after the game. “Where he was strictly the energy guy in the ACC — for us, he’s a go-to and it took him a couple of scrimmage games and maybe even a couple of games to kind of figure out that ‘I’m not going to come out for every mistake. You know, I’m probably the focal point of the offense and the anchor of the defense.”

“So once he got that role together,” Hill said with a smirk, “I still think sky’s the limit for us, especially going into a conference play.”

Indeed, Gibson has been the team’s leading scorer at 13.5 points per game and second-leading rebounder with 7.5 per game.

But the Rams are far from a one-man squad. Nine players scored on Wednesday night, including forward Jaylen Alston (14 points)  who is back after sitting out the 2021-22 season as well as the previous season when the CIAA did not play.

The team has a solid mix of upperclassmen and youth that Hill really likes.

“It’s a good mesh. I think the leadership of (Xavier) Fenell and (Jon) Hicklin is good and Jaylen Alston coming back — hungry —  I think is good. As well as Jaylin Parker, who’s been an experienced and steady voice in the locker room. So I think we’re going to lean on that for most of the season, those guys have been there, they’ve done it. They’re champions. Xavier Fenell is a graduate, so we’re going to lean on that experience a lot.”

Fenell started on Wednesday while Alston came off the bench as Hill decided to switch things up. He only scored two points and grabbed one rebound, but he’s a high-energy player who has been with the team since Hill took over at Winston-Salem State prior to the 2018-2019 season and played a big role on the championship squad that featured Alston as its second-leading scorer. He’s happy to have Alston back both on the court and in the locker room.

“It’s been great because he brings a great defensive and rebounding presence and he’s good with leadership as well. So it takes a load off me for you know, being the old guy and trying to be a leader because I would be moreso by example, but he’s a lot more vocal.”

Alston is listed at 6’4, but the chiseled redshirt junior plays much bigger as he leads Winston-Salem State in rebounding with 8.4 boards per game to go with his 13 points per game.

But the kids are alright, too

WSSU’s backcourt features sophomores Samage Teel (11 points) and Issac Parsons (10 points) as starters alongside Hicklin. Both are members of the Rams’ 2020 recruiting class, so they have a little seasoning of their own.

“And now you’ve got guys like Teel, Parson and (Dyquavius) Wilkins,” Hill said. “They’ve been here for a year. They’ve tasted some success winning the  (CIAA South) division, but then they tasted some disappointment of losing in the CIAA Tournament. But those voices of those things are really huge for us.”

Mention freshmen guards KC Shaw and Jeremy Dixon and everybody lights up, including Fenell, the grizzled veteran of the Rams.

“They have a real promising future, especially with Jeremy and K.C.,” Fenell said. “They’re both athletic. Jerm can really shoot the ball and KC can really take it to the rack. So it’s nothing, but the sky’s the limit for them.”

The same could be said for the entire team. Its only loss in the first eight games came at the hands of Indiana University of Pennsylvania, which is ranked third in the nation. Winston-Salem State started the week ranked seventh in the Atlantic Region after bringing home the Gary Miller Classic Championship from Pennsylvania last week.

The Rams have won 19 games in each of the past two seasons, and this team appears to be deeper and more talented. It’s a long season, though, and Hill knows that the CIAA has several really good teams with really good players.

“It’s going to be interesting,” Hill said. “It’s going to be back the way it was probably in the mid-nineties, eighties in terms of competitive throughout the north and the south. So it should be good.”