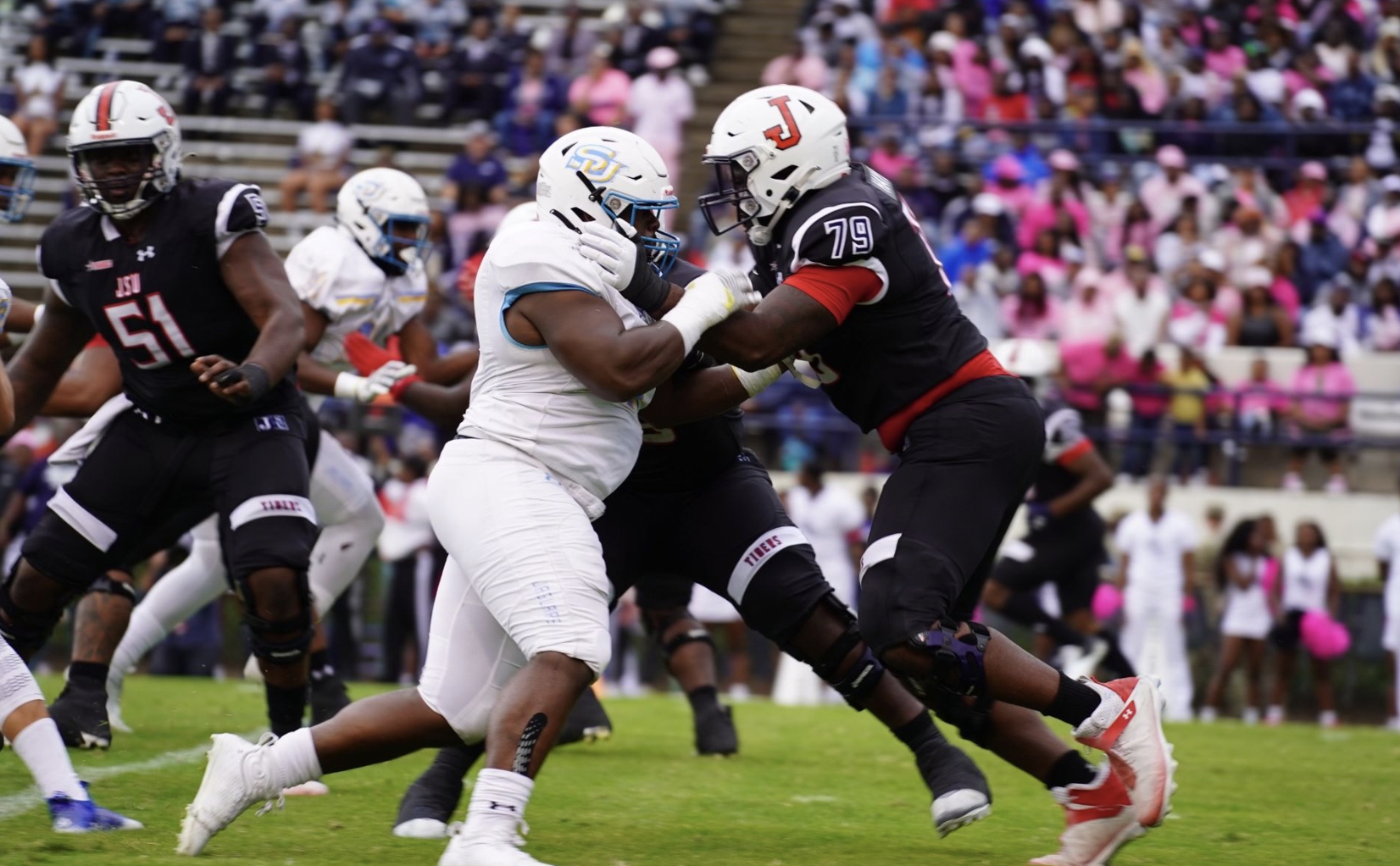 Southern defeated Grambling State at the Bayou Classic and now has a return match with Jackson State in next week’s SWAC Championship Game.

New Orleans, LA – Four things had to happen over the last two weekends of the 2022 SWAC regular season for Southern to earn a spot opposite undefeated East Division champ Jackson State in the Dec. 3 SWAC Championship game.

How Southern did it

Southern (7-4, 5-3 SWAC West), who was off last week, needed losses by Prairie View A&M to Mississippi Valley State, Alcorn State to Jackson State and Texas Southern to Alabama A&M in their games last week to stay alive for the West Division title. Each lost opening the door for the Jags to earn the title with a win in its season finale this week vs. Grambling State.

Down 17-14 after three quarters, Southern outscored rival Grambling State 20-0 in fourth period to pull away to 34-17 victory before a crowd of 62,337 fans at Saturday’s Bayou Classic at the Caesar’s Superdome. Two defensive fourth-quarter touchdowns – one on a fumble return and one on an interception return – allowed Southern to break from a close game and roll to the win. Southern QB Besean McCray passed for 75 yards and ran for 93 yards and a touchdown in the win.

It not only clinched the West title but gives the Jaguars a 25-24 edge in the 49th edition of the hotly contested rivalry.

“Our defense came on strong at the end,” victorious Southern head coach Eric Dooley said after the game. “The offense also moved the ball well and got into the end zone. At the end of the day, I thought we played well as a team. You know, you’re talking about a big-time rivalry right here in Grambling. They’ve been playing well lately, as well. But our guys fought for sixty minutes.”

Dooley back in the Championship Game

For Dooley, it will be a return trip and rematch on two fronts with Jackson State (11-0, 8-0 SWAC East) and head coach Deion “Coach Prime” Sanders in the championship game.

Before taking over at Southern this season, Dooley was head coach at 2021 West Division champion Prairie View for four seasons. His Prairie View Panthers won the West in 2021 and battled Sanders’ Jackson State team in last year’s title game in Jackson. JSU prevailed 27-10 in a hard-fought contest. Dooley hopes his Jaguars can put up a similar battle when they face the FCS fifth-ranked Tigers next week.

Additionally, Jackson State shutout Southern 35-0 when the teams met this season on Oct. 29 on the same field in Jackson that will stage the championship game. Dooley said he’s looking forward to it.

“I never look in the rear-view mirror, we just got to look at what’s ahead of us,” Dooley said. “We’ve got the opportunity to represent the West in the SWAC championship game. We know it’s not going to be an easy battle. Facing Jackson (State), that hasn’t lost a game this year, we’ve got our challenges. But we’ll be prepared and ready.”