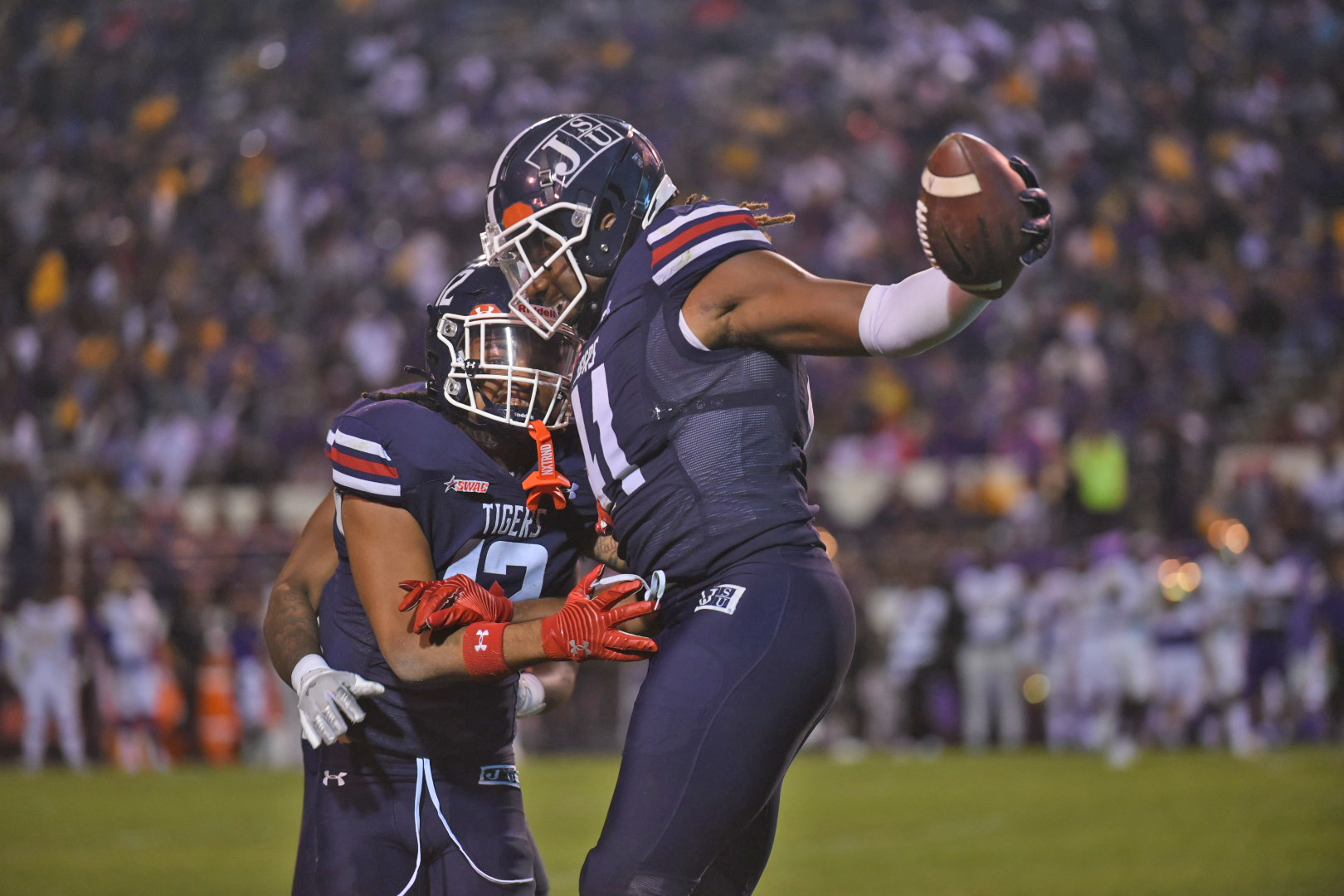 The defenses of Jackson State and Prairie View A&M were stingy in Saturday’s SWAC Championship Game before a record crowd of 50,128 at Jackson’s Mississippi Veterans Memorial Stadium.

Jackson State’s was just much stingier.

It’s the first SWAC championship for the Tigers (11-1) since 2007 and fulfills a prediction by ebullient 2nd-year head coach Deion “Coach Prime” Sanders that this fall’s team would win it all.

The SWAC title earns the Tigers (11-1) a Dec. 18 date at the Cricket Wireless Celebration Bowl at the Mercedes Benz Dome in Atlanta vs. MEAC champion South Carolina State. Celebration Bowl Executive Director John Grant was on hand to present JSU the bowl invitation in the postgame ceremonies.

On a day when freshman quarterback Shedeur Sanders, the SWAC freshman of the year and Coach Prijme’s son struggled, the Tigers’ defense and special teams came through.

Sanders, who had not thrown for under 200 passing yards in any game this season and topped the 300-yard mark three times, completed just 8 of 16 passes for 85 yards and one touchdown with one interception.

The big special teams’ play was a 91-yard kickoff return by Isaiah Bolden after Prairie View had gone ahead 10-7 midway thru the second quarter on a 37-yard Luis Reyes field goal. The return, at the 6:25 mark of the second quarter, gave the Tigers a 13-10 lead they would not surrender.

On Prairie View’s second possession of the third quarter from its own 12, Pass dropped back and attempted a screen pass that JSU linebacker James Houston deflected and then hauled at the 5 and waltzed into the end zone. Noah Anderson added the PAT and JSU was up 20-10 with 8:17 to play.

Trazon Connely came in for Pass but the Panthers went 3-and-out and punted. JSU then turned to its ground attack and senior running back Peytton Pickett responded. He carried five times for 39 yards in a drive that covered 48 yards in six plays. His 5-yard scoring run put JSU up 27-10 with 2:39 to play in the third quarter.

That would be all the Tigers needed.

Linebackers Aubrey Miller and Keonte Hampton led the JSU defenders with nine and six stops respectively. Both had one sack. Houston, who also had five tackles to go along with his pick six, was the defensive MVP.

Pass finished 6 of 19 for 80 yards and the three picks. Prairie View runners had 100 yards on 38 carries. Connley ended up leading the rushers with 53 yards on 10 carries.

Jackson State and Prairie View A&M battled on near even terms n the first half with Jackson State going into the break with a 13-10 lead.

Jackson State came right back to score, driving 65 yards in six plays to score on Sanders’ 16-yard pass to a wide open Malachi Wideman in the right end zone. Noah Anderson’s PAT tied the score at 7 with 1:04 left in the period. Both teams had seven first downs in the first quarter. Prairie View had 91 yards while JSU had 72.

In its first second quarter possession, Prairie View went three and out and got off a 19-yard punt that gave JSU the ball at the PV 25. JSU got an 18-yard carry from Pickett down to the. PV 3. On 3rd-and-goal from there, Sanders was intercepted in the end zone by defensive back Darius Campbell.

Prairie View promptly drove 60 yards in nine plays to score on the 37-yard Reyes field goal and go up 10-7 with 6:38 to play in the half. The big play in the drive was a 42-yard connection from Pass to Howard.

On the ensuing kickoff, Bolden caught the ball at his 9 and went 91 yards up the right sideline, breaking a tackle late to go in for the TD. Anderson’s missed PAT left JSU up 13-10 with 6:25 left in the half. The teams exchanged possessions and Pass threw an interception late but the teams went into the half with the same score. PV got off 42 plays in the half for 157 yards. JSU had a total of 124 yards on 27 plays from scrimmage.