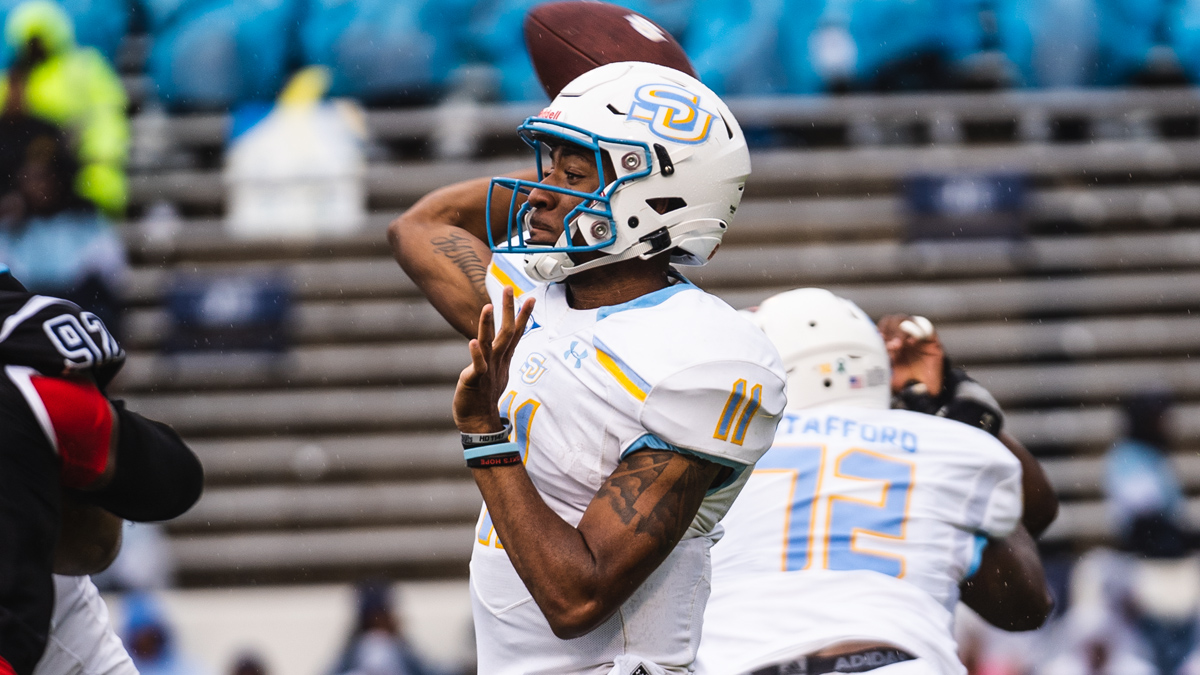 Southern can win the SWAC West and a date with Jackson State in the Dec. 3 SWAC Championship game. Here’s how.

The champion of the SWAC West division and spot at East Division champion Jackson State in the Dec. 3 SWAC Championship Football game will come down to the final game of the regular season – next week.

Three of the four teams in position to claim the West title – Prairie View A&M, Texas Southern and Alcorn State – all lost Saturday.

Those results leave only Southern (6-4, 4-3 W) with a chance to catch Prairie View.

A win by the Jaguars and first-year head coach Eric Dooley will tie Prairie View at 5-3 in the division. By virtue of their head-to-head win over Prairie View, the Jags would win the division title and championship game berth. Southern easily handled Prairie View behind the play of quarterback Besean McCray, 45-13 on Oct. 8.

A Southern loss vs. Grambling State Saturday gives the division title and a return trip to the championship game to Prairie View and new coach Bubba McDowell. Prairie View, with Dooley at the helm and McDowell as his assistant head coach, lost to JSU in the 2021 SWAC Championship Game 27-10. The Panthers (6-5, 5-3 W) did not face Jackson State this season.

Jackson State and Southern met on Oct. 29 this season. Quarterback Shedeur Sanders passed for one TD and ran for two in a 35-0 Jackson State shutout win.

Prairie View A&M entered its regular season finale at Mississippi Valley Saturday on top of the division at 5-2. The Panthers only needed a win vs. the 1-9 Delta Devils to claim the division title. The Panthers (6-5, 5-3 W) lost badly, 27-7.

With the loss by Prairie View, Alcorn State and Texas Southern,could have tied Prairie View with wins in their finales. Both entered Saturday’s games 4-3 in league play, Wins would have initiated tie-breaking procedures with Prairie View.

Alcorn State, playing in front of a packed house of over 31,000 on its home field in Lorman, Ms., battled gamely but lost to undefeated Jackson State, 24-13.

Texas Southern, playing at Alabama A&M, lost starting QB Andrew Body in the fourth quarter, and gave up a late TD in falling to the Bulldogs, 24-20.

Either Grambling State (10) or Southern (7) has represented the West Division in 17 of the 23 SWAC Championship games since 1999.