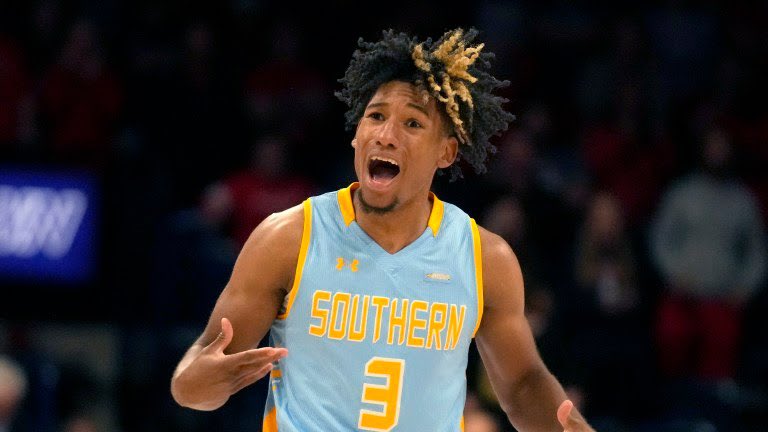 Southern University is the fourth SWAC team to beat a Pac-12 team in the last week as it knocks off Cal on the road.

One week after its SWAC rival took down a Pac-12 school on its home floor, Southern University went on the road and did the same thing against Cal.

Southern led California from wire-to-wire, coming up with a 74-66 win over the home program. The SWAC squad led by as many as 16 at one point in the first half.

Brion Whitley led the way for SU with 18 points, hitting seven of his 14 field goal attempts, including a four-for-eight performance from the 3-point line. Guard P.J. Byrd had 13 points and nine assists while Dre’Shawn Allen chipped in 13 points off the bench.

The trio led an SU attack that was on fire offensively, hitting 49 percent of its field goals while hitting 12 of its 23 attempts from 3-point range. It also took care of the ball, limiting its turnovers to 13 while adding 16 assists.

The win was the first of the season for Southern, which started its season on the West coast with UNLV, Arizona and Saint Mary. It is now 1-3.

Southern University became the fourth SWAC basketball team in a week to win a game against the Pac-12 in a matter of a week. First, there was Grambling soundly beating Colorado, then Texas Southern knocking off Arizona State with Prairie View taking down Washington State. All of those wins were at home as part of the SWAC/Pac-12 Legacy Series.

The Southern-Cal game, however, was a part of the 2022 Emerald Coast Classic’s campus round. Both Cal and Southern will travel to Niceville, Florida next week to play a pair of games in separate brackets of the multi-team event on Nov. 25-26.

In any event, it is another big win for SWAC basketball against a Power Five opponent.