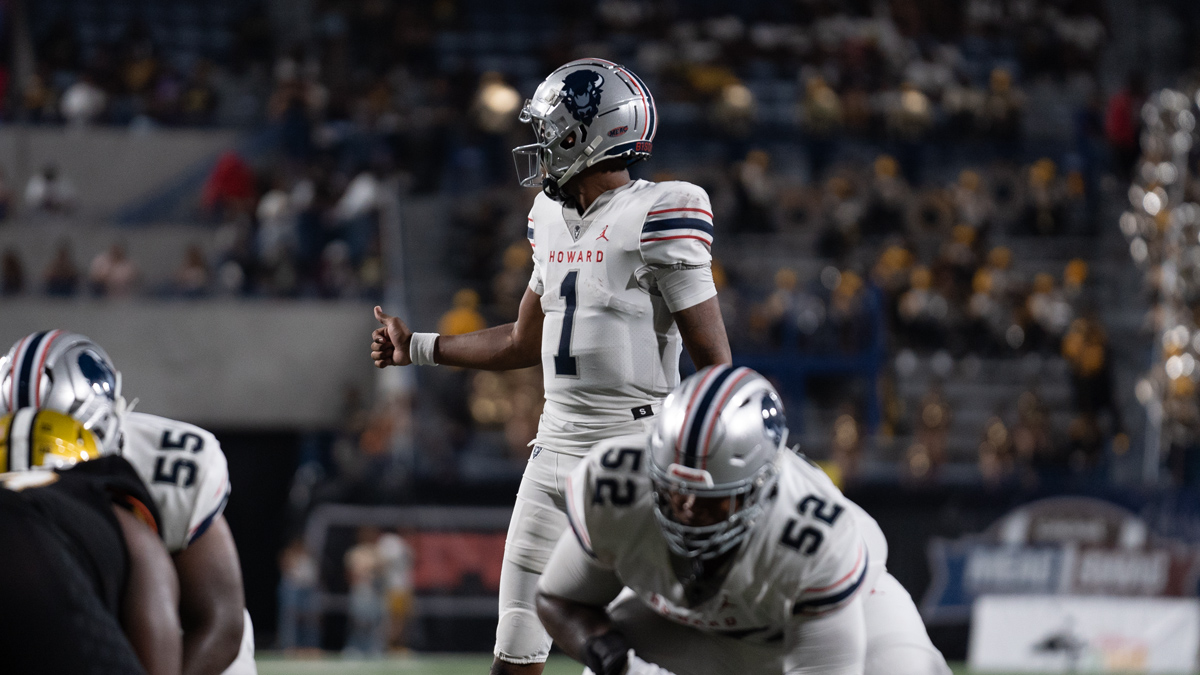 Howard and Morgan State need to be good to make HBCU football in the north great again.

Howard and Morgan State have met 87 times since 1899. Unlike many meetings over the past couple of decades, there is more on the line than just bragging rights when the two programs meet on Saturday.

Morgan State and Howard were predicted to finish at the bottom of the MEAC, sixth and fifth, back in July. Depending on how Saturday’s game at Hughes Stadium goes, Howard could end the day as MEAC co-champion while Morgan State could win more than four games for the first time since 2014.

Neither team will finish with a winning record despite the outcome of Saturday’s game, but both programs seem to be moving in a positive direction in the early portion of their new head coaches’ tenure.

Howard is just 4-6 overall in its second full season under Larry Scott. Scott says he knows folks are looking for a quick fix, but this ain’t that.

“We’re not going to be able to do that here. We have a few different challenges — academic profile-wise and without being able to load up or take transfers at any point in time in their collegiate career. We’re going to always have a different way of doing things. What have to do is put a lot of stock in to development, both mentally, physically and nutritionally —  the whole deal, which is a little bit more of a process they would have to go through to get there.”

Scott and Howard started the season 0-3, and entered MEAC play with no FCS wins. It looked like another disappointing season was on the horizon for HU. It is a program that has found consistent football success elusive for over a century, with just one MEAC title (1987 and 1996 championships were vacated) to its credit since the league kicked off in fall of 1971.

But HU got off to a 2-0 start with wins over Delaware State and Norfolk State before faltering against Celebration Bowl-bound NCCU. It bounced back with a win over South Carolina State — just the second for HU over SC State since 2007 — giving itself a chance at a piece of the MEAC crown.

Scott knows his program isn’t there yet, but he does see some daylight in the program’s future as he looks to build a winning culture there.

“Once you’ve got it there and you have the model for it and the formula is working, it usually is something that becomes a machine and takes care of itself,” Scott said. “So we’re still in the process of building that engine, so to speak. But I love in that in this journey we’ve had our ups and downs, our ebbs and flows and our challenges and every one of those moments have become teachable moments that we can learn something from.”

Up the beltway in East Baltimore, Damon Wilson is trying to build a winning culture at Morgan State. He didn’t get the job until late May, and didn’t get his full staff together until after July 4. But he feels like the tide is already starting to turn in the locker room and beyond.

“The players have done a great job just listening and buying into the program. We lost a couple of games that were really close — last play of the game —  and you know, those games, we’ll come out on the other side of those games when we have a little bit more experience and a little bit more belief in the process. And I think that’s something that we continue to go through with regards to everybody buying in and doing all of the little things right.”

Like Howard, MSU’s season included a win at home over South Carolina State, a program it had only beaten once since Buddy Pough arrived in the conference in 2002. A win would put it in second place in the conference after being projected to finish sixth out of six teams.

“We talk about —  when we came into this thing — we were I think we were projected to finish last. And that’s something that our guys understood coming into the year,” Wilson said on Monday. “And what I told them is not how you start is how you finish. So it gives them an opportunity, gives us an opportunity, like you said, to finish on a high note, not meet the projections.”

Both programs are looking to turn things around, hoping that one day they can look back and say that this was the year where things started to move in the right direction.

Bowie State has been carrying the flag for HBCU football in the north over the past half-decade while Morgan State and Howard (and Delaware State) have cycled through coaches and losing seasons. These two programs, in particular, have not lived up to their lofty academic profiles on the field of play.

The architect of Bowie State’s success is now in Baltimore, while Howard has a coach that actually seems interested in being there for the long haul and cares about his student-athletes. Both programs are led by men who understand the potential of what their programs could be. Saturday’s contest offers a chance to see what it is like to realize some of that potential. Because if not now, when?