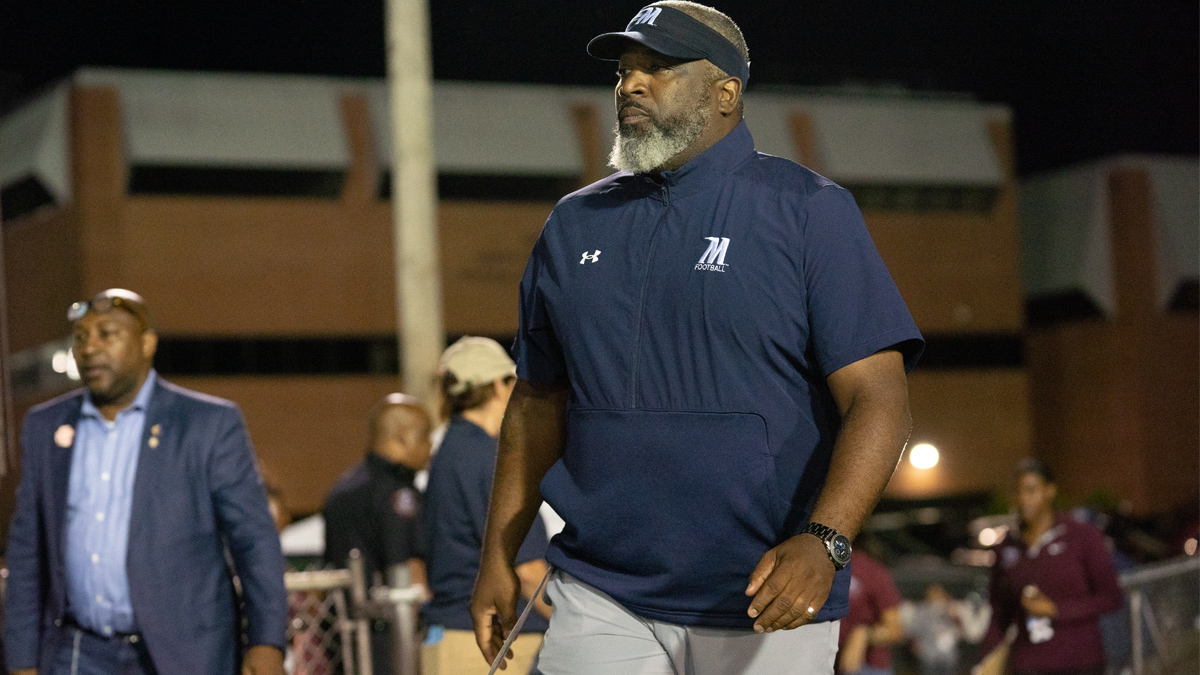 New Morgan State head coach Damon Wilson has a vision for building a winner that goes beyond players and coaches.

Morgan State had a slim lead over South Carolina State heading into halftime at Hughes Stadium, but Damon Wilson could sense that the home crowd was waiting for the bottom to cave in.

“When they scored and bought the game, 17-14, I looked back at halftime and I saw some of the folks get a little nervous,” Wilson told the media in Monday’s MEAC conference call. “You know, a ‘here we go again, mindset. That sort of thing. And that’s something that we have to eliminate as something that we have to continue to educate and teach folk how to overcome adversity.”

Ultimately, Morgan State wouldn’t just win the game, it would run away with it. The final score was 41-14 in favor of the home team.

“It’s something we talk about in our locker room, you know, and once we understand that — the football team —  hopefully it will spill over to the campus and supporters and everybody else,” he continued. “But it was great to see the fans there. It was great to see their reaction and talk to them after the game. I think this was the first time we had beat South Carolina State in a number of years.

It had been 20 years since Morgan State had conquered its conference rival, back in Buddy Pough’s first season as SC State’s head coach.

“You know, once again, I didn’t know that,” Wilson said. “But it’s a great situation any time you’re able to beat the national champion.”

Anyone familiar with Morgan State football could understand why those fans felt a bit uneasy. The program hasn’t had a winning season since 2014, when it was one of five programs to claim a MEAC title.

As Morgan State was suffering in Baltimore, Wilson was busy building a winner at Bowie State. Starting in 2015 his program won five out of six CIAA North division titles and three consecutive CIAA championships, lifting that program to unprecedented success. This spring he left behind a national championship contender at his alma mater to take over a football program that has only had back-to-back winning seasons once over the past 40 years. He says he realizes that requires re-programming the way fans interact with the program.

“We’re teaching, not just a football team, how to be successful, but we’re also teaching the crowd when to cheer, when not to cheer. How to be involved and the impact they have on the ballclub as well,” he explained. “When I first got hired, I said it’s all hands on deck and I mean that from the bottom of my heart, from the custodians here on campus to the administrative assistants, everybody has to be on the same page to get done what we need to get done.”

Wilson said he developed his philosophy on program building during his time in the SWAC as an assistant at Texas Southern and Prairie View.

“Just to see the alums pull in on Wednesday for homecoming and see them come over to the offices…And whether it’s giving gifts or just hugging and high-fiving the student-athletes. Whatever it may have been, it changed my whole role as an alum,” Wilson said. “So, therefore, now as a coach and as a head coach, I understand the importance of it.”

Just like the turnaround on the field (Morgan State is 3-5 this season), Wilson knows the turnaround won’t happen overnight. But he sees the potential for a new day in East Baltimore.

Indeed, Wilson is part of a new-look Morgan State athletics program. In a matter of months, the program brought in Dena Freeman-Patton as its new AD, and hired Damon Wilson as its football coach. A few weeks later the school hired Dr. Jorim E. Reid to be its new band director.

“Dr. Reid got here shortly after I did,” Wilson said. “So we have a new band director and he and I have a great relationship and I’m quite sure we’re going to talk or debrief, if you will, after at the end of the season to talk about how we can improve that overall experience. But we need everybody.”

Many football coaches — even at HBCUs — view marching bands as a distraction at best and a nuisance at worst. Few of them make plans to de-brief after the season with them. But Wilson clearly sees the value in it.

Wilson’s vision is to build a new culture built on relationships, one that creates a winning and supportive atmosphere to change the trajectory of the football program. That change, however, might ruffle a few feathers in the tailgate areas.

“Man the tailgating is before the game and after the game,” Wilson said with conviction. “Shut the tailgate area down during the game, get to the stadium, support these young men and women on the playing surfaces so they can see they can see and feel your energy and it helps them.”

“Everybody wants to be feel appreciated when they put in some work and everybody needs uplift when they may be down,” Wilson said. “And I think it’s our responsibilities as alums and fans and supporters to make sure we do that for our student athletes.”