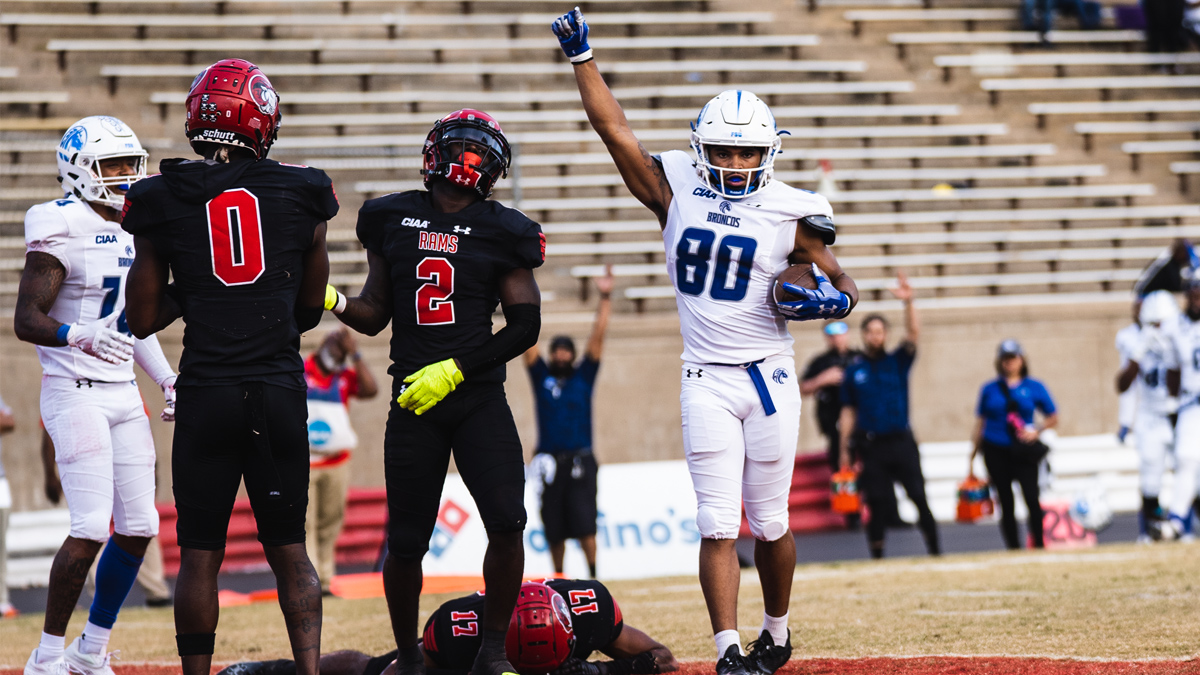 Fayetteville State gets by WSSU, advances to CIAA title game

Fayetteville State moves past an offensively-frustrated WSSU squad on its way to the CIAA title game.

WINSTON-SALEM, NC — It wasn’t pretty, but Fayetteville State found a way to close out the regular season with a win on Saturday night.

FSU’s offense was largely held in check by a scrappy Winston-Salem State defense, but it’s defense played lights out and took advantage of turnovers and penalties to come up with a 14-6 win in Bowman Gray Stadium.

“Well, we knew we were going to have to come out in here and fight,” Fayetteville State head coach Richard Hayes Jr. said after the game. “We knew Winston-Salem State wasn’t going to lay down. In this particular game you can throw the records out the window. It don’t mean nothing. But I’m really proud of my team.”

WSSU came into the contest having won three-consecutive games and took the early lead, scoring on a four-play, 70-yard drive to take a 6-0 lead after a missed PAT. Quarterback AJ Jackson connected with receiver R.J. Mobley for a 50-yard pass that would put the team inside the five-yard line. WSSU would pass for just 37 yards the final 55 minutes of the game.

Fayetteville State would score twice in the second quarter — one on a three-yard run by quarterback Caden Davis and the second on a pass from Davis, deflected at the line, that landed in the hands of David Baros.

“Big kid to try to tackle on the goal-line,” Hayes said of Davis.

That would be all the scoring in the game, as neither team managed to sniff the end zone again.

WSSU was limited to just 157 yards of total offense, converted on just 2-of-11 third down attempts and turned the ball over twice. The run game was even more anemic, as it gained just 70 yards on 34 attempts for a 2.1 average.

The Rams finished the season 3-6, their third consecutive losing season.

Fayetteville State’s offense was pedestrian at best, but it did just enough to keep the game out of reach for WSSU and win its sixth-consecutive game. It will now turn its attention to Chowan, who it will face in the CIAA Championship game. FSU has in four consecutive championship games dating back to 2017, including three in a row to Bowie State.

“We’re finally going against a team that ain’t undefeated, so we might have an outside shot,” Hayes said with a smile. “But I like our chances. Chowan had a big day today. They’re a really good football team. We respect them, but we’re going to come to play as well.”

Fayetteville State gets by WSSU, advances to CIAA title game