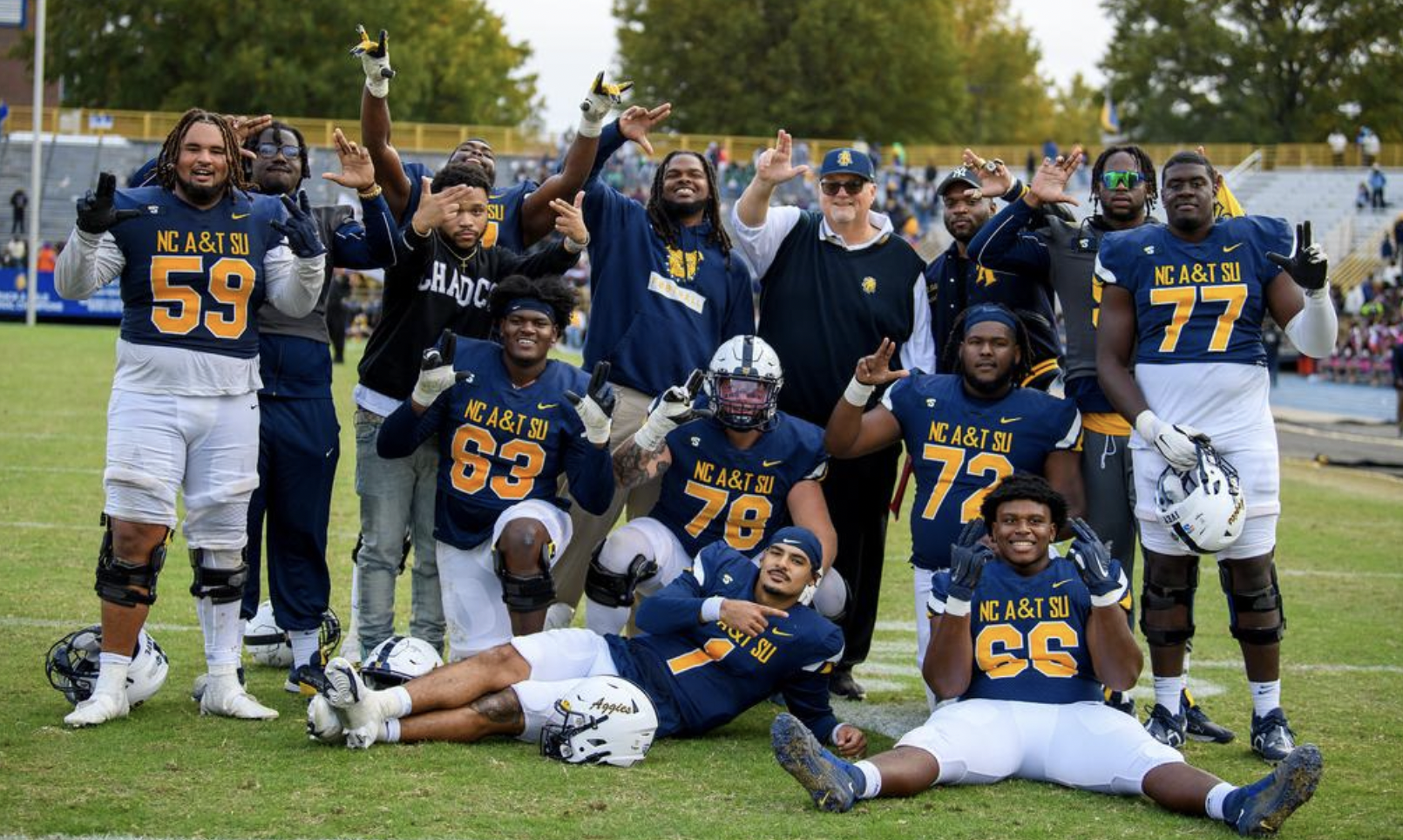 With a victory over Campbell, the Aggies are closing in on a championship

GREENSBORO, N.C. — In the second half of what was to be a 49-20 loss to Duke, the North Carolina A&T offense found a spark which apparently ignited a five-game winning streak and put the Aggies in position to capture the Big South Conference championship.

Trailing 42-6 after three quarters, the Aggies (5-3, 3-0 Big South) rallied in the fourth quarter and got a Charlie Dixon touchdown run and an Eli Brickhandler scoring pass. It may not have seemed like much, given the final score, but it was enough to reverse the fortunes of a team searching for a turnaround after an 0-3 start.

“We were able to finish that fourth quarter with two touchdowns,” A&T offensive coordinator Chris Barnette says. “Kind of being dominant and doing a great job of running the football, taking what the defense gives us. Really, since then, we’ve been playing so much better.”

Through the first four games of the season, A&T hadn’t settled on who would be its lead quarterback. Zach Yeager started in the loss to NC Central, and four Aggie quarterbacks played against SC State, which is where the winning streak began.

Jalen Fowler was the QB sweepstakes winner. He threw for just 110 yards in the victory over Bryant. But in beating Edward Waters, Robert Morris and Campbell, Fowler has thrown for 773 yards and eight touchdowns.

And then, there’s Bhayshul Tuten, the running back who’s already set a school record with seven straight games with at least 100 yards rushing and is closing in on the conference record of nine, set by Rashad Jennings of Liberty in 2008.

After he could only manage 20 yards against NCCU, Tuten launched his streak at North Dakota State with 127 yards and followed up with 133 against the Blue Devils. He racked up 496 yards in the next four games and highlighted the run with a 256-yard day against the Camels, earning him conference offensive player of the week.

“I think what got better was the communication on both sides. And just as a team, we started trusting each other more. We were just feeling more confident each and every week,” Tuten says. “Practice hard, play hard, and we are where we’re at now.”

It was Tuten, who now has 1,032 yards and eight touchdowns, who suggested the change started with that fourth-quarter surge against Duke, even if the Aggies only scored twice and lost by 29.

A&T steps away from conference play on Saturday and hosts Norfolk State, which will be part football game, part reunion. All the pleasantries will be put aside for the week.

Barnette coached with one of Norfolk State’s coaches at A&T, and he was involved in a National Football League internship with another of the Spartan assistants.

“When the game starts, it’s all about business,” Barnette says. “We both are putting a game plan together to get a win. When it starts is when we step on the field and play.”