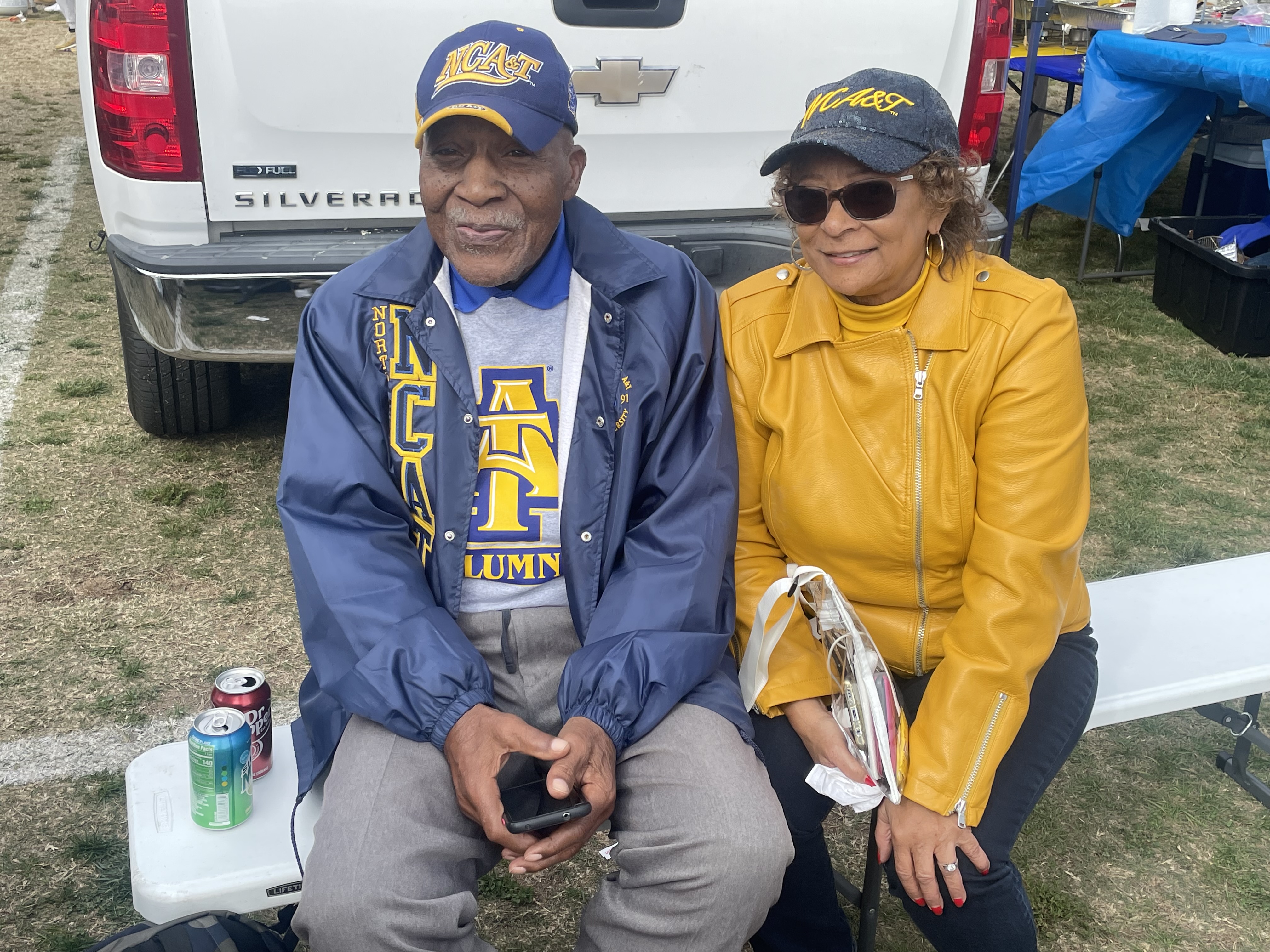 GHOE brings out the Aggies stars

Former Aggie and NFL vet Cornell Gordon, here with his wife Alfreda, was among the former NC A&T standouts on hand at GHOE (The Greatest Homecoming on Earth).

Among the more than 21,500 fans that packed NC A&T’s Truist Stadium Saturday for the Aggies GHOE (Greatest Homecoming on Earth) were three stars from their glorious gridiron past.

Two are arguably the greatest running backs in Aggie history – Maurice Hicks and Tarik Cohen. Both toiled for the Aggies during their 50-year history in the MEAC. Another is a legendary figure that goes back to the early 1960s when A&T played in the CIAA.

They watched perhaps the school’s next great running back, sophomore Bhayshul Tuten, Saturday. The 5-10, 190-pound dynamo rushed for 256 yards on 30 carries and scored on 70- and 42-yard runs Saturday as A&T pulled out a 45-38 win over Campbell at GHOE.

The name you’re more likely to know from Gordon’s playing time is “Broadway” Joe Namath. Namath is the former Alabama quarterback taken first overall in the 1965 AFL Draft by the New York Jets. In Super Bowl III in 1969, Namath led the AFL champion Jets to a 16-7 win over the NFL champion Baltimore Colts. It was the first victory for an AFL team over its NFL counterparts in the championship game and sped up the merger of the two leagues.

The win also became legendary because Namath guaranteed the win. Enough on Namath.

The Norfolk, Va. native and Booker T. Washington High School graduate was one of five HBCU players on that Super Bowl-winning Jets team. The others were OT Winston Hill (Texas Southern), DBs Johnny Sample and Earl Christy and RB Emerson Boozer. The latter three all came out of Maryland State (now Maryland-Eastern Shore). Hill was inducted into the Pro Football Hall of Fame in 2020.

“I started 11 ballgames during the Super Bowl year,” Gordon said as he sat with his wife in the tailgate area. “I played in every game besides the Super Bowl.

“(Johnny) Sample had gotten hurt and I had to play three positions that season,” Gordon said. “I had to play corner, free safety and strong safety.” Gordon now lives in the Tidewater Virginia area.

On the sidelines at GHOE was the leading rusher in NC A&T and MEAC history, former running back Tarik Cohen.

The 5-6, 175-pound back is on the mend after suffering ACL and MCL tears and a tibial plateau fracture in the 2020 season for the Chicago Bears. The injury happened on September 20, 2020, less than a week after the fourth-year veteran signed a three-year, $17.25 million contract extension with the Bears.

Cohen was placed on the reserve/physically unable to perform list to start the 2021 season. He missed the entire 2021 season while recovering from the injury. The Bears released Cohen on March 16, 2022

On May 17, Cohen suffered a torn Achilles tendon during a training session livestreamed from his Instagram account.

He said Saturday that he is still recovering from those injuries and hopes to be ready for the start of the 2023 NFL season.

Tarik, a native of Bunn, N.C., rushed for over 1,000 yards in each of his four years (2013-16) playing for the Aggies and head coach Rod Broadway. He finished his career with 5,619 yards breaking the league record of 4,672 yards set by South Carolina State’s Wil Ford (2006-09). During his career, Cohen became the first player in MEAC history to win three straight offensive player of the year awards.

In his junior year, he rushed for a career-high 295 yards and three touchdowns in earning the MVP award in the first Celebration Bowl in Atlanta. He posted 28 100-yard games in his career and eight with over 200 yards.

The 5-6, 180-pounder was drafted in the fourth round of the 2017 draft by the Bears. He was first team all-pro as a return man in 2018 and was also named to the Pro Bowl. Primarily as a back-up, he rushed for over 1,000 yards in his four years in the NFL with five rushing touchdowns, three TDs on receptions and one score on a punt return.

Also on the sidelines before the game vs. Campbell was another former outstanding NC A&T running back, Maurice Hicks.

Hicks, out of Emporia, Virginia, finished his two years (2000 and 2001) with a total of 2,812 rushing yards, then a school record. That total is almost exactly half of Cohen’s four-year total. Hicks reached that number in just 19 games (146.2 yards per game).

Hicks signed as a free agent in 2003 and spent seven years in the NFL with three teams.

GHOE brings out the Aggies stars