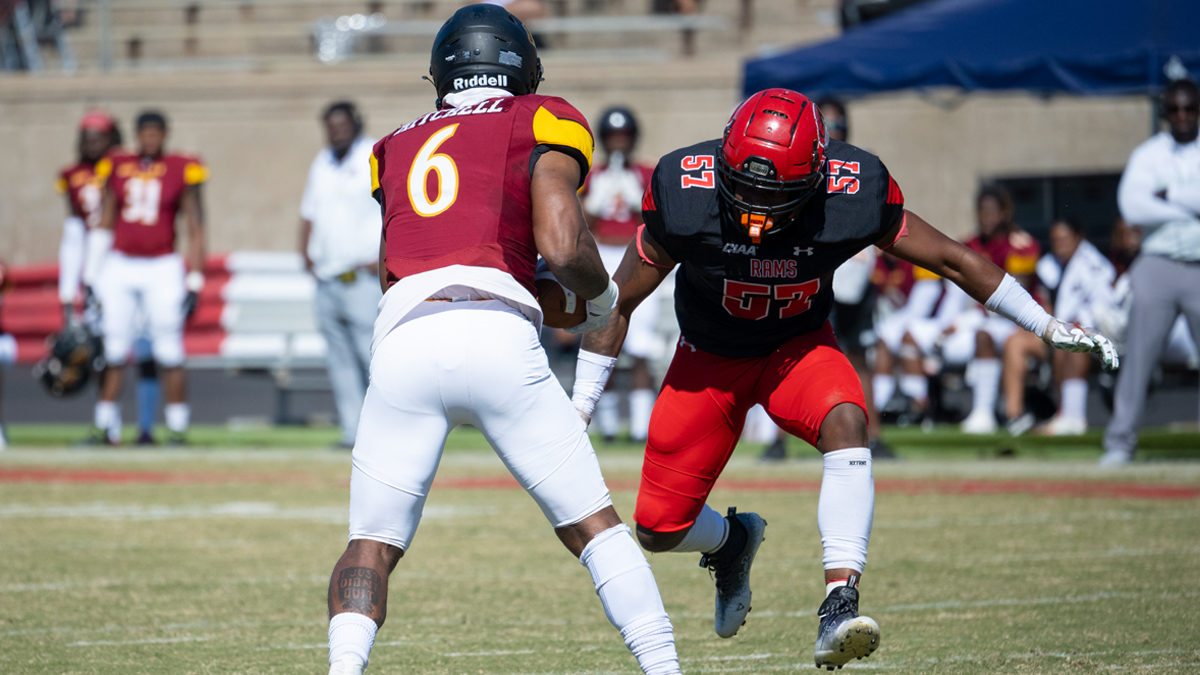 Willy Blackstock remembers friend who helped him get his life together

WINSTON-SALEM, N.C. — Ross Johnson was surely smiling from his heavenly seat last weekend after seeing the young man he led from potential trouble make the game-winning play for Winston-Salem State.

The Rams, playing at home for the first time in 2022, captured their first victory of the season when walk-on Willy Blackstock picked up a blocked field goal attempt and ran 68 yards for a third-quarter touchdown that led to a 17-10 victory over Shaw. It was the first victory for permanent coach Robert Massey.

Blackstock, who wears a necklace in tribute to Johnson, performs a ritual before every game to pay homage to the friend who steered him right.

“Before we run out, I go down to the goal line. I say my prayer. I look up to this guy,” Blackstone says. “And then, the rest is the rest. You know, when we cross the lines and ready to put everything with our body on the line, we got to stay prayed up.”

On Oct. 22, 2020, police in Reidsville reported Allen Michael “Ross” Johnson IV, 21, was found shot to death near an intersection. Less than three months later, authorities arrested a 17-year-old suspect in the shooting as well as a man from Browns Summit. But before Johnson was killed, he had made his impact on Blackstock.

“In high school, I was on a bad path,” he says. “But he was the one who took me to school and kept me on the path that I’m on today. So, I take him everywhere I go.”

Blackstock’s path has been a bit circuitous.

THE ROAD TO WSSU

The senior linebacker began his collegiate career at Fayetteville State where David Bowser was assistant head coach and defensive coordinator. The two didn’t see eye-to-eye, he says, and he was ultimately suspended. Blackstock transferred to WSSU, not very far from his home.

“And the coaching staff believed in me and gave me another chance to play football,” he says. “And I’m glad they did.”

Bowser is now the head football coach and athletic director at St. Augustine’s, and guess Winston-Salem State will face on Saturday.

“So, I have a vendetta out against him to let him know that you passed up on me, but I’m here,” he says. “I’m ready to play to show the coaching staff what they’ve been missing.”

If Bowser has watched any video from the WSSU victory, he’s surely seen one play that will let him know Blackstock is doing just fine. He says the coaches told the defense to stay on the field to attempt to block sophomore kicker Devin Versteegen‘s 31-yard field goal try. The right side of the line was to block the kick and Blackstock was supposed to run behind the ball. Narique Smith blocked it, and Blackstock carried out his part of the strategy to perfection.

“I’m not even supposed to be on the field goal block team,” Blackstock says. “It’s just about when your number is called, you’ve got to respond.”